Press Release: Masbia & Eichlers of Boro Park Announce “On-Tab Groceries” for Families Who Lost Their Breadwinner During The Outbreak

Masbia of Boro Park and owner of the Boro Park New Eichler's Judaica Bookstore, Mordy Getz, launched an initiative to support newly widowed mothers with children who were left without their main breadwinner due to the coronavirus outbreak. Any surviving spouse with children of a breadwinner who fell victim to Covid 19 since Purim 2020, will have a free “tab” in a local Boro Park grocery, until the Jewish New Year - Rosh Hashana. 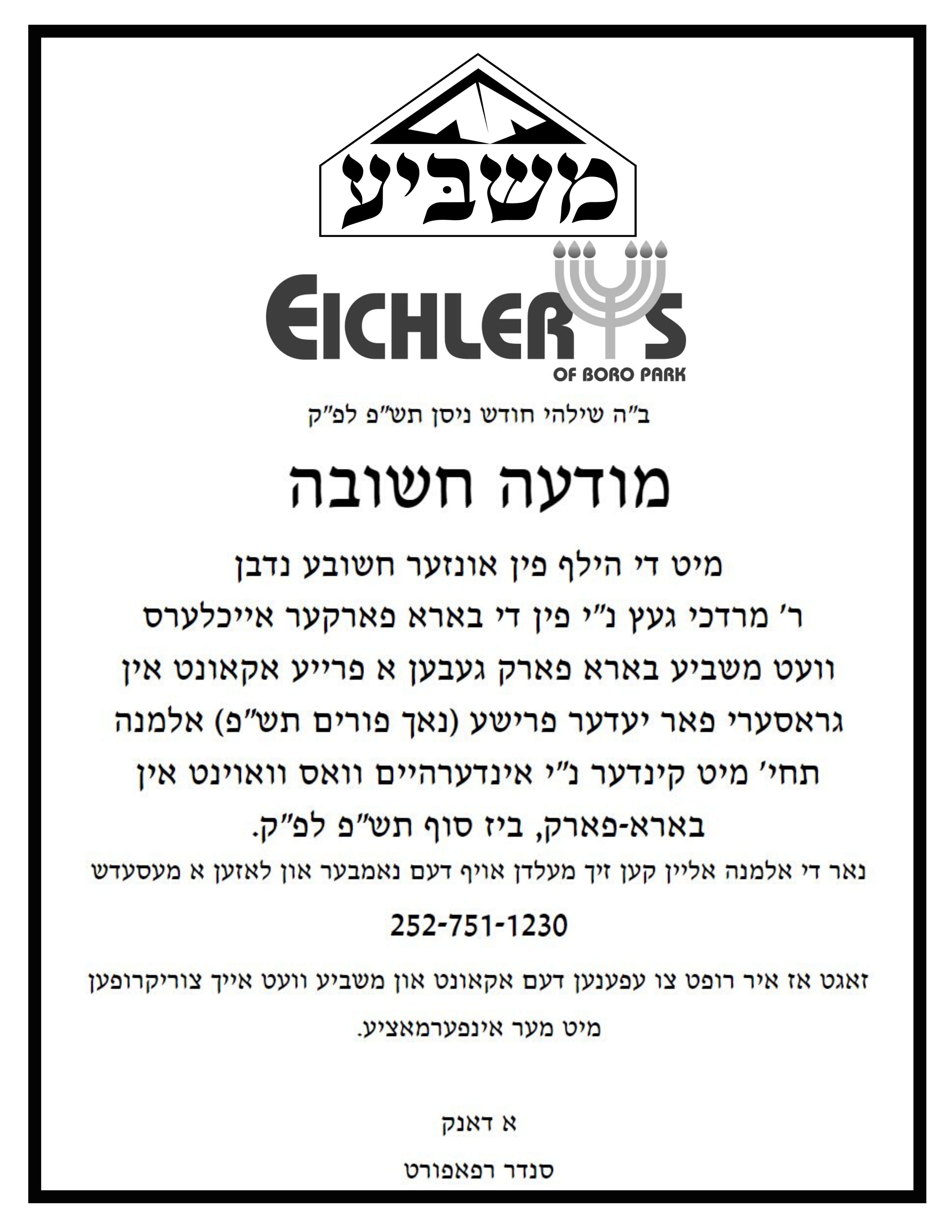 “I am a cancer survivor who has made it my life’s mission to assist and support cancer patients and their families. I have come to understand that covering the costs of basic groceries while a parent is ill or after their passing is an often overlooked struggle, groceries go a long way towards determining how well families cope during such a crisis” said Mr. Getz

The current pandemic has taken an incredible toll on the community. The sudden passing of countless able-bodied breadwinners has left many families without a source of income. Some mothers who find themselves suddenly with the finances of taking care of the entire family are struggling with a  sudden new responsibility.

Alexander Rapaport, Executive Director of Masbia Soup Kitchen Network said, “In general emergency food charities are considered supplemental., and have two dozen or so food items to take people for three to seven days. During the current  outbreak, Masbia already stepped up to give people for more than a week's worth of food moving away from supplemental to peoples only source. For those families, we felt that even more is needed, so with the help of Mordy from Eichler’s we launched this initiative.”

“By having the surviving spouse making one discreet call with no intermediaries - no matter how well-intentioned they are - involved, makes us able to preserve his or her dignity, Just one voicemail and a follow-up return phone call will put all wheels in motion in setting up an account,” Rapaport explained. Even that short conversation makes the mother and I choke up and hold back tears,” he added.

“I am proud to join my dear friend Alexander Rapaport of the Masbia Soup Kitchen Network, in his mission to provide free groceries to these widows and their children for the immediate future.” Said Mr. Getz.

“In addition to my personal donations, I plan to recruit other philanthropists to help Masbia in this critical endeavor and hopefully have others follow our innovative project to alleviate the enormous material and emotional challenges these survivors are facing in the immediate future”

Since word spread through the grapevine, many other neighborhoods and communities expressed interest in replicating the concept. Masbia is actively seeking sponsors to expand the project in other neighborhoods. Anyone with interest can donate here https://www.masbia.org/ontabgroceries or email [email protected].

Masbia Soup Kitchen Network has seen a huge increase in need with over 50% new families joining our breadline every day since the outbreak began. Since the Convid 19 crises became a reality in NYC Masbia has distributed over $1,000,000 worth of food. Funds were mainly raised by a significant increase in donations by supporters nationwide.

As we are sending this presser out - Itzy laub Chair of Masbia of Queens pledged to sponsor all families in the Kew Gandes Hills neighborhood.A phone number a number for that neighborhood to call will announced shortly.