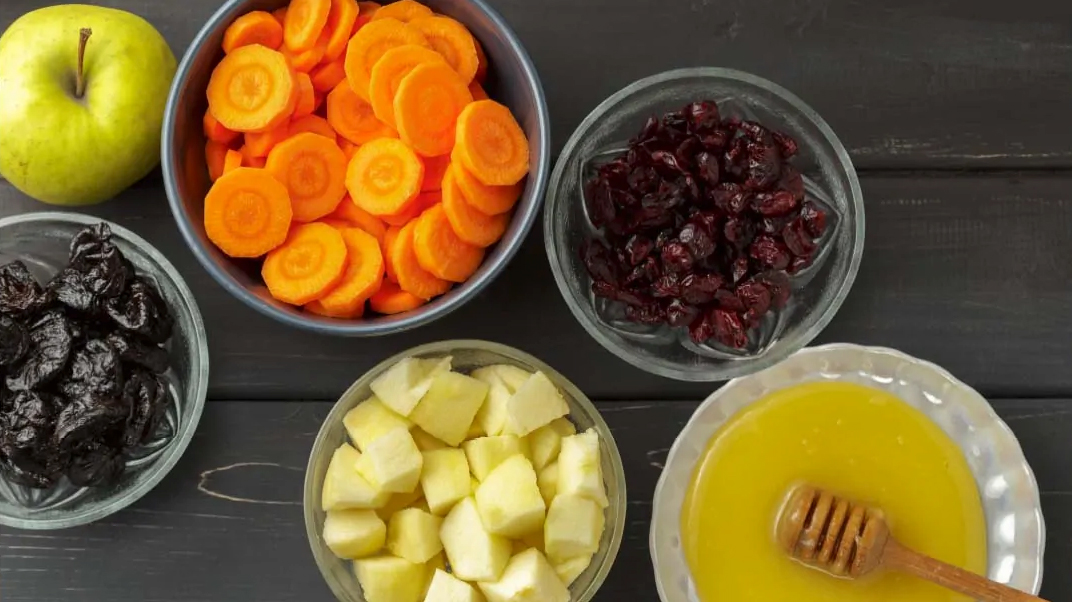 Read the interview below by Barbara Bensoussan, published in Mishpacha on Tzimmes, to learn about preparing tzimmes for Rosh Hashanah explained by Masbia ED, Alexander Rapaport, who also tells the story about tzimmes becoming popular. We added a lot of Photos from our archive.

Headline: WHAT A TZIMMES!

Lawyer-turned-baker Leah Haddad, whose roots are Yemenite, was once asked to create a tzimmes recipe for a cookbook. She looked up the word tzimmes in a dictionary and discovered that its first-known use occurred in 1892, perhaps originating from the German zuomuose, or “side dish.” Leah commented, “The dictionary also shows ‘grimace’ as the only word that rhymes with tzimmes, which indeed describes my reaction when I was first introduced to the overly sweetened dish… Adding sugar to vegetables is definitely not part of the Jewish culinary tradition in which I was raised.”

I grew up in an Ashkenazic home, but as a child I also grimaced over tzimmes. Sweet was for cookies, not vegetables! But tzimmes was a staple of our Rosh Hashanah table, as it is for so many, and I warmed up to the idea over time.

I got out of having to make tzimmes myself by marrying a Moroccan. But even Moroccans eat sweet vegetables on Rosh Hashanah. I make a butternut squash soup every year, as per my in-laws’ minhag, and when I braise my lamb’s head (lamb cheeks, really), I add the simanim of gourd (more squash) and carrots, flavoring it with turmeric and cinnamon. Not so different, really…

It turns out that Ashkenazic tzimmes has a pretty interesting background. Alex Rapaport, the executive director of Masbia Soup Kitchen, says that tzimmes was first made popular by Rav Shlomo Ganzfried about 150 years ago, when he mentioned it in connection with Rosh Hashanah in his Kitzur Shulchan Aruch. “In Europe, people didn’t have dates and pomegranates and the other, more exotic foods that are part of the Sephardic Rosh Hashanah meal,” Mr. Rapaport explains. “So aside from the head of a fish — which was no novelty because people always ate the whole fish back then — and apples in honey, Ashkenazim only had carrots to use for a siman.”

Cut into orange and gold coins, carrots are reminiscent of the plenty we hope to receive in the new year. The Yiddish word for carrots, meren, can mean “plenty” or “more,” and is related to the Hebrew word marbeh. The Hebrew term, gezer, sounds like gezeirah and invites the yehi ratzon “shetigzor aleinu gezeiros tovos,” that Hashem should issue us only good decrees.

“There were no refrigerators in the late 1800s, so food had to be made on Yom Tov so that it would stay fresh,” Brynie says. “Back then it was considered ‘fancy’ to have a stove!

“Rebbetzin Ginsburg continued making this tzimmes when she lived in the village of Mir, Poland, in the 1930s and 40s. Each family had one room in an apartment building, but there was only one stove that everyone had to share. Since she could only use the stove for a limited time, Rebbetzin Ginsburg would put her meat, carrots, and sweet potatoes into one pot — presto, a main and two sides! She’d put it on the burner in the morning, and it would be ready when she came home from shul.”

Tzimmes found a place in more recent Jewish history during Hurricane Sandy. When a senior housing facility in Far Rockaway lost power, the residents were all brought to the Park Slope Armory, where 600 cots awaited them. 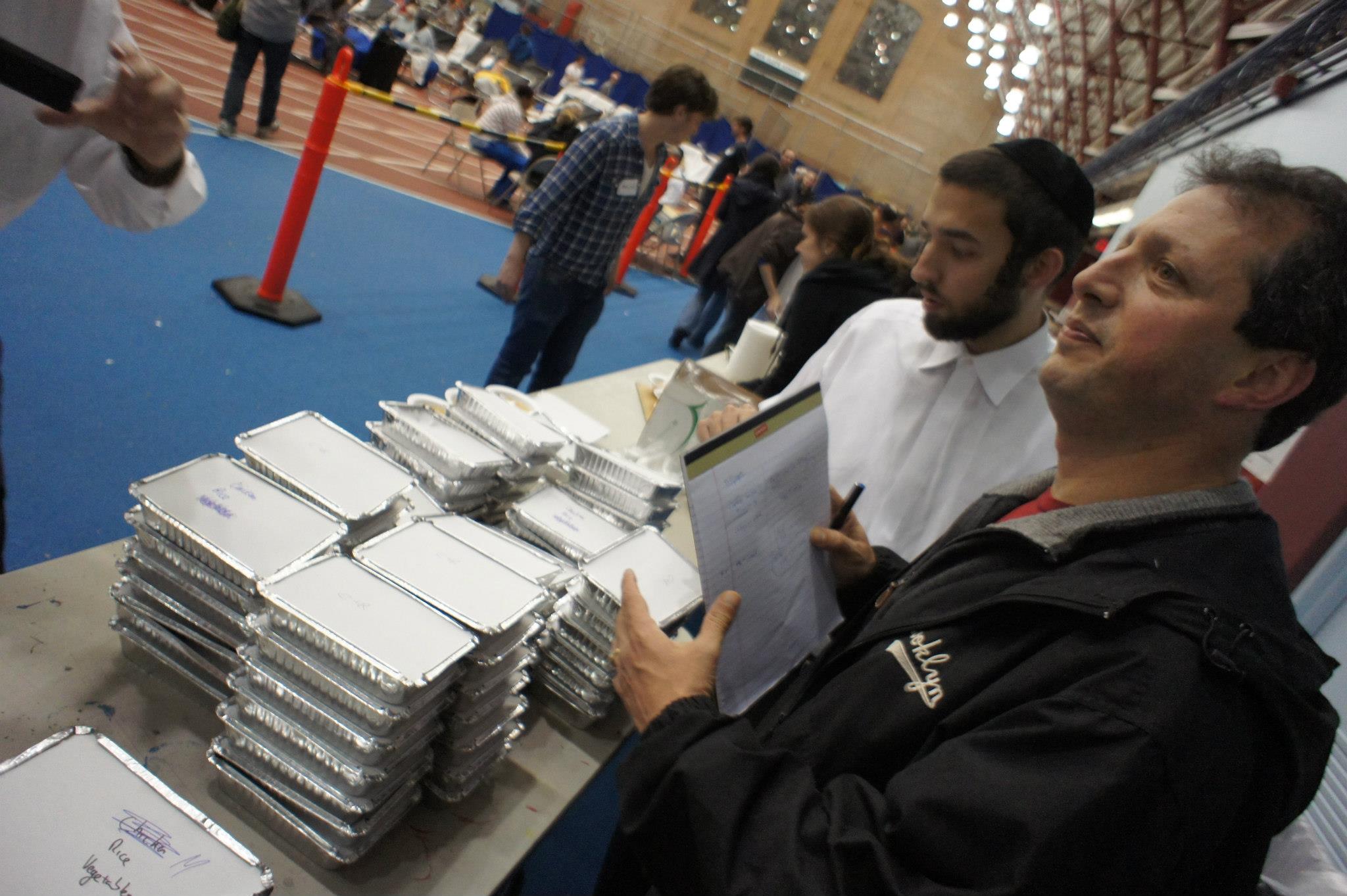 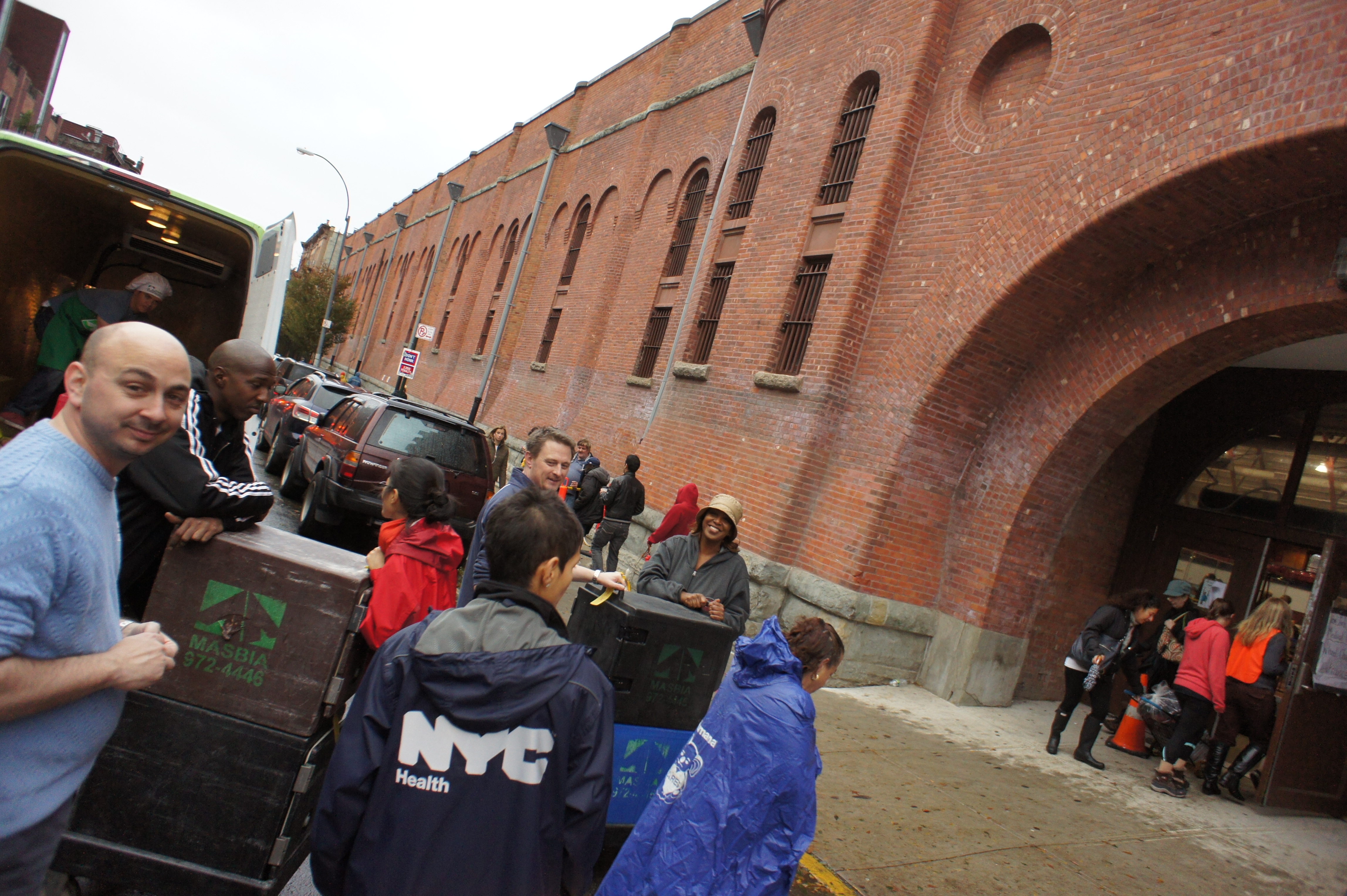 “The first days were crazy,” Alex Rapaport recalls. “The Armory only had prepared army rations, and there was no water for showers. Our staff couldn’t get there because the trains weren’t running.”

He put out a call to Chaverim and others asking for help, and they decided to make tzimmes as a senior-friendly side dish (low salt, low sugar, yet fresh and appetizing). They filled the Masbia ovens with carrots, left them on low heat, and let them simmer all night. In the morning, when the cook walked in bearing cinnamon-scented tzimmes, the crowd’s spirits lifted visibly. 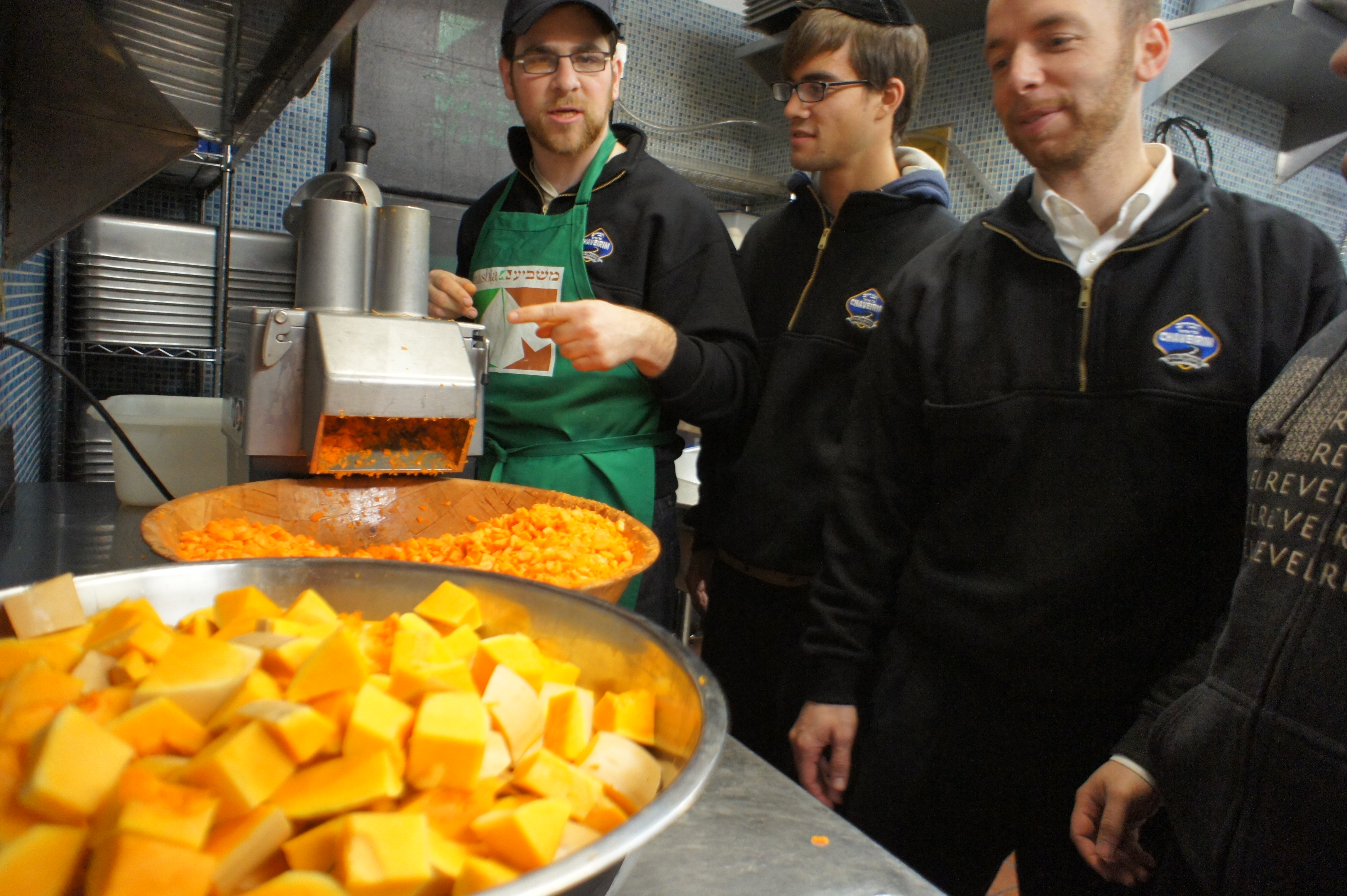 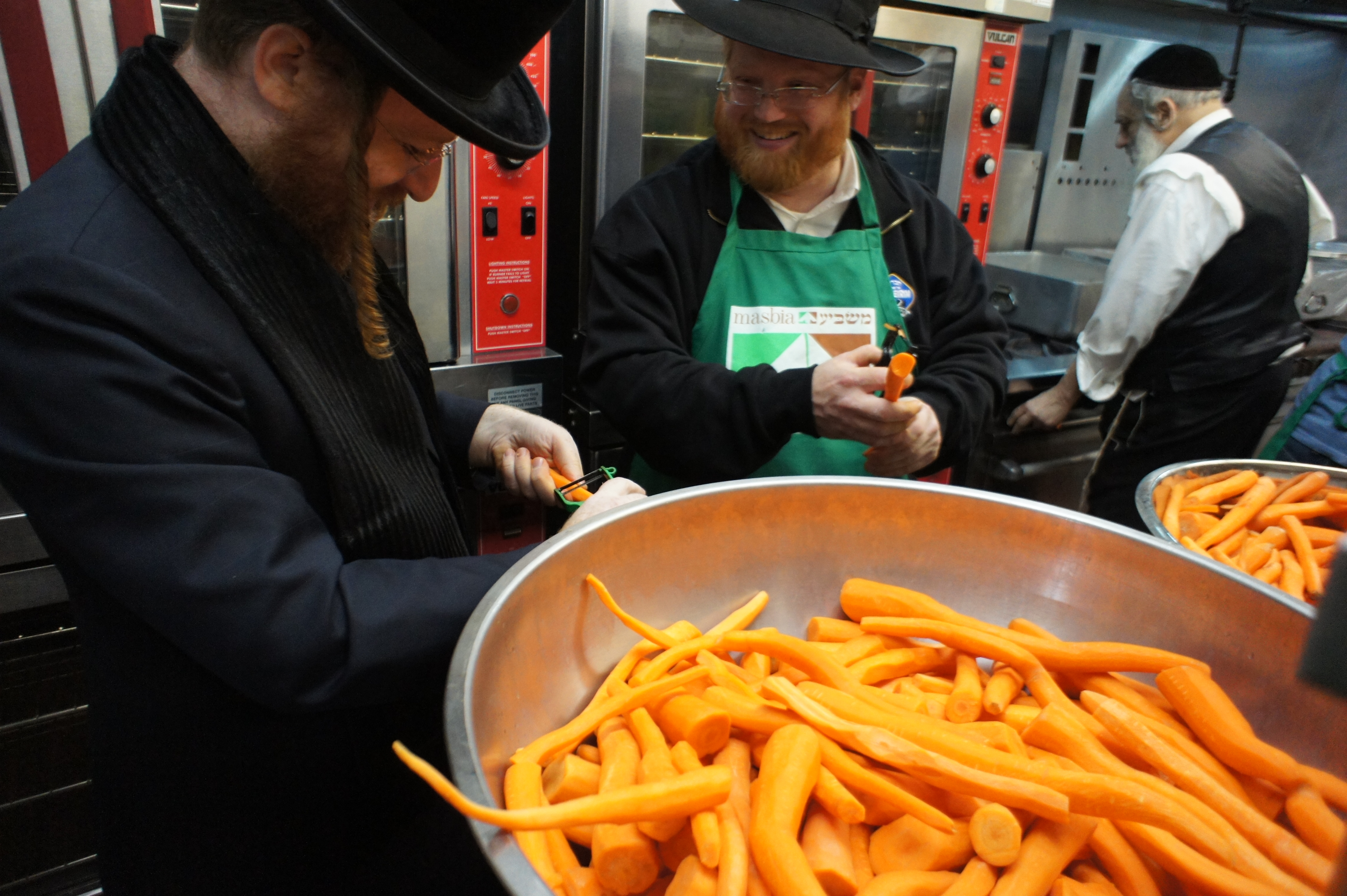 “The whole mood changed!” Mr. Rapaport says. “The sour smell of the Armory was suddenly replaced by the delicious smell of tzimmes!” His grandmother happened to be in town, and that weekend four generations of the Rapaport family cooked close to 1,000 pounds of tzimmes. 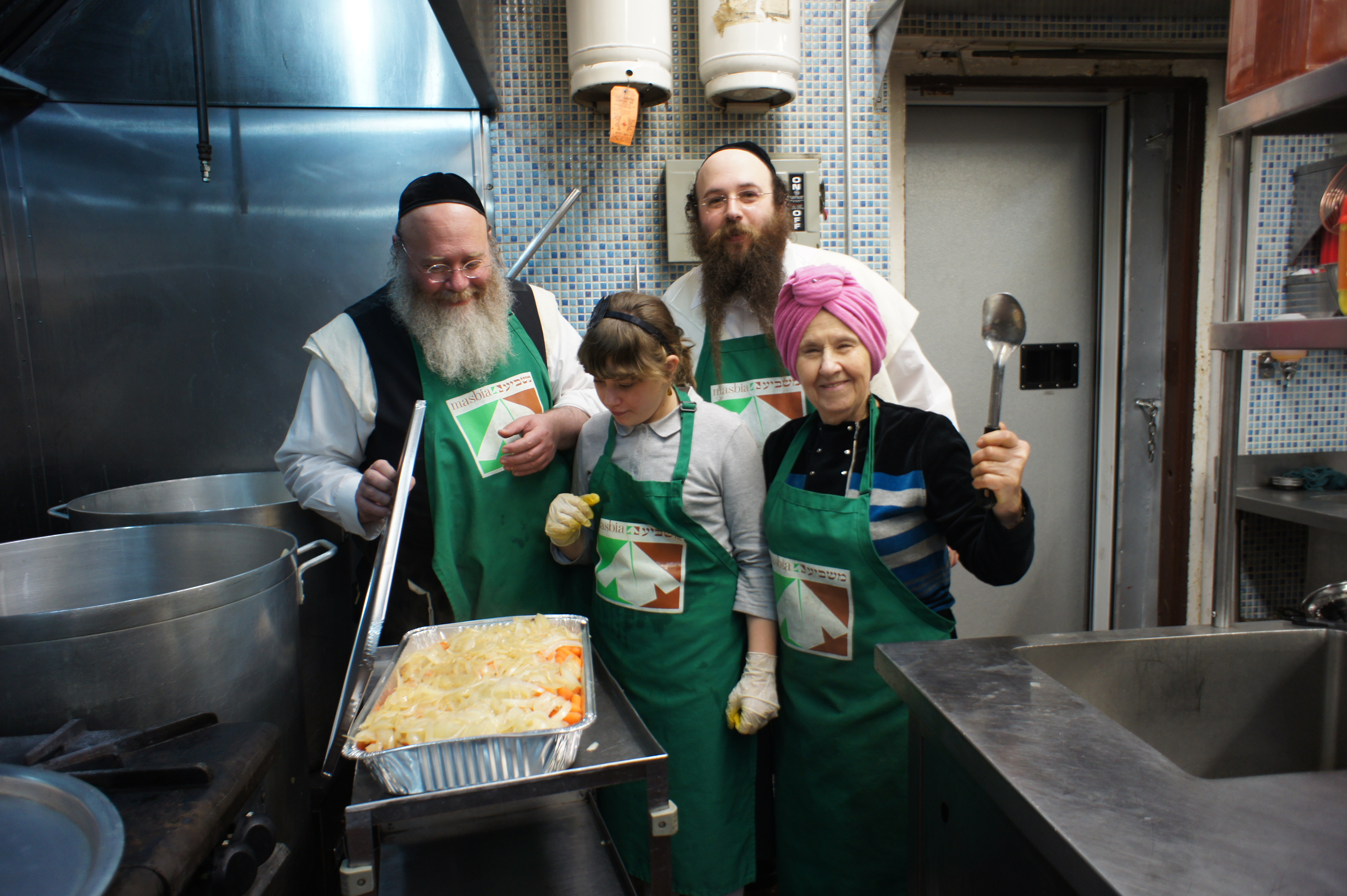 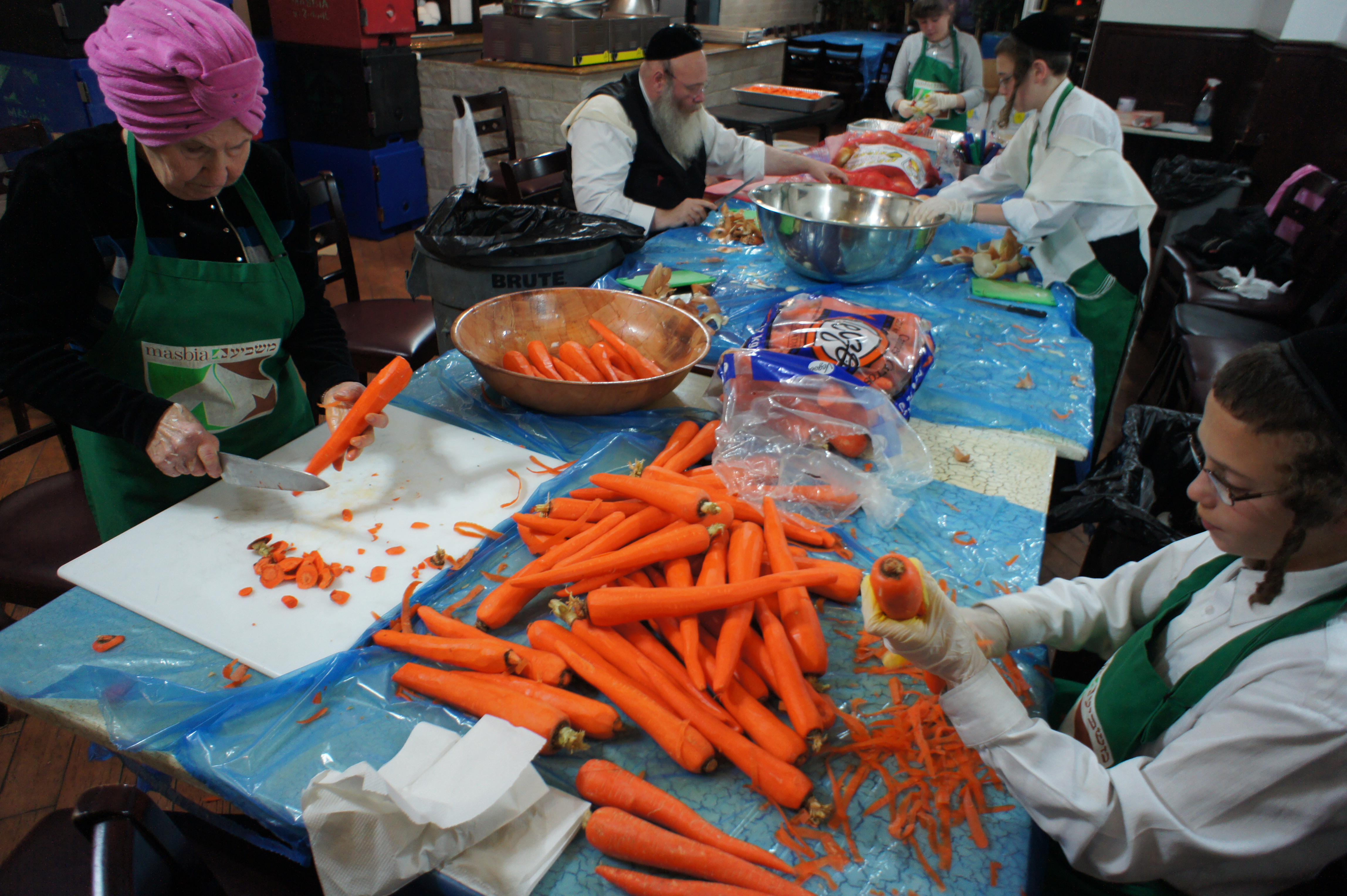 The following year, when Masbia went to Washington, DC, after Rosh Hashanah to protest a proposed 40 billion dollars in cuts to food aid for the poor, they served tzimmes outside the Capitol building to government representatives. Who would have imagined tzimmes would go to Washington? 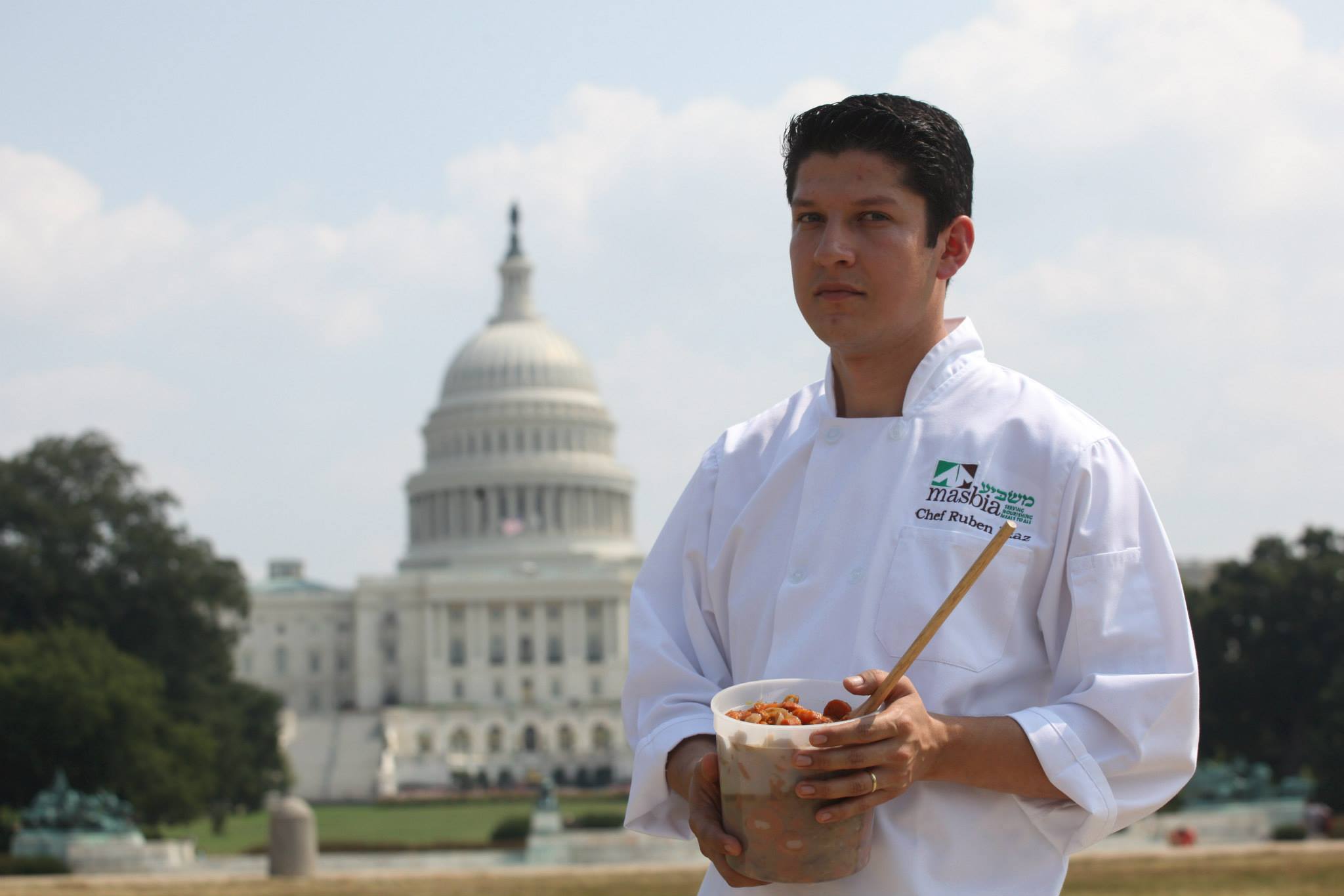 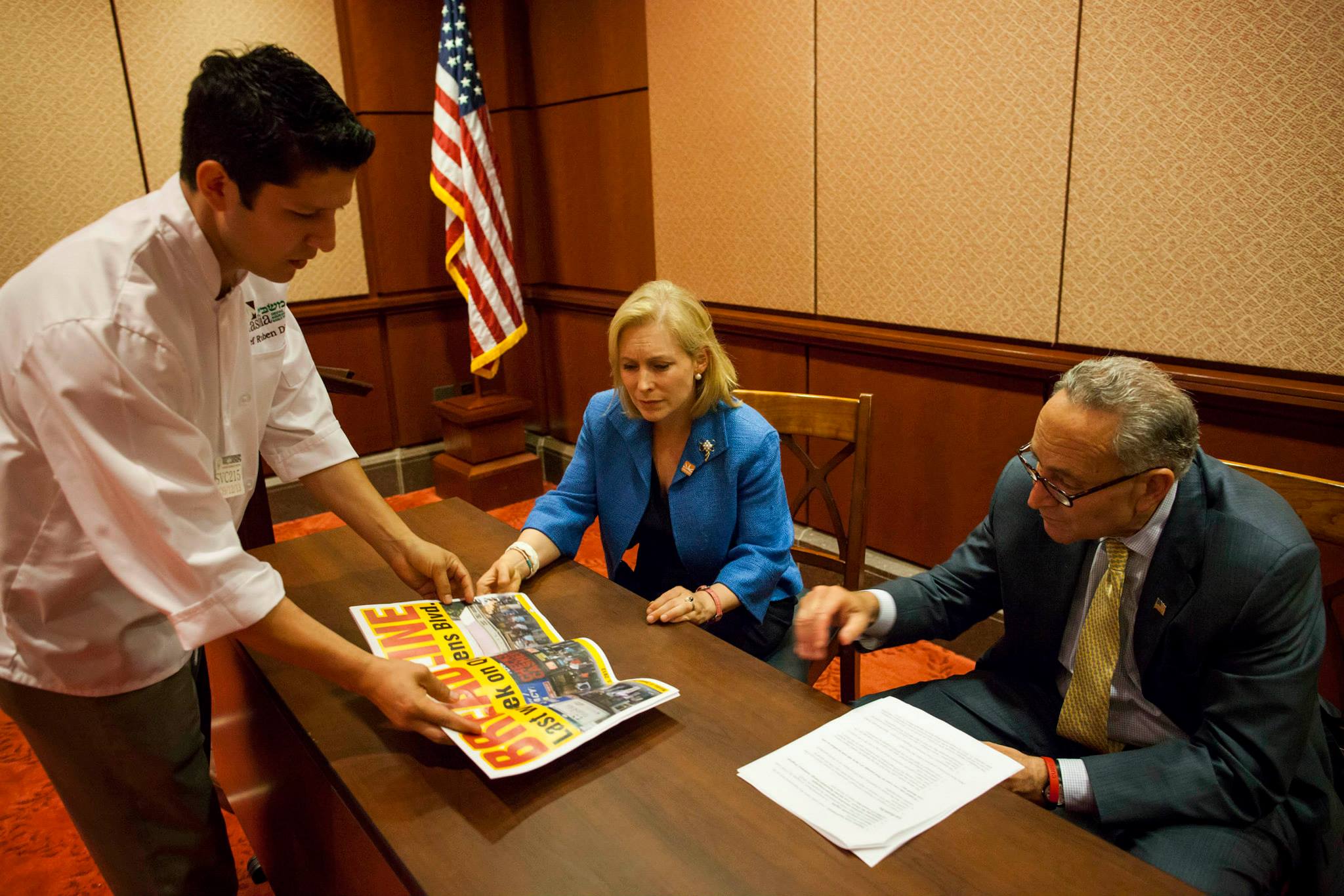 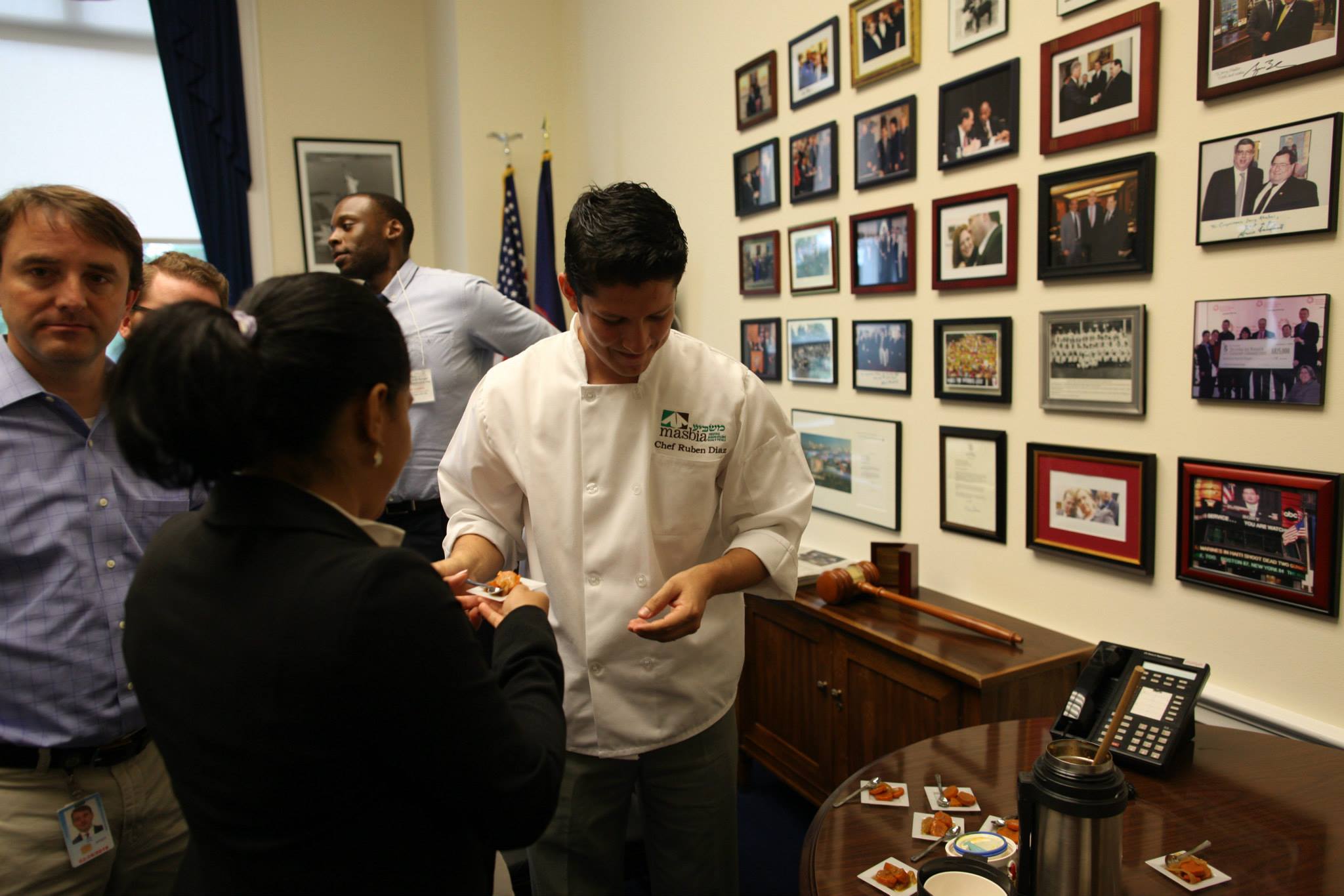 Tzimmes is usually cooked long and slow, with sugar, honey, or syrup augmenting the sweetness of the carrots. A few years ago, when Susie Fishbein cooked at a Masbia kitchen, she suggested they use silan in their tzimmes.

“Silan, or date honey, is actually the honey referred to when the Torah calls Eretz Yisrael a land ‘flowing with milk and honey,’” Mr. Rapaport says. “It’s only recently that producers in Israel have come up with a true date honey that has no added sweeteners. I think it’s amazing that after two thousand years we can use this ‘honey’ in our Rosh Hashanah foods again and bring the kedushah of Eretz Yisrael to our tables.” Dates, of course, happen to be one of the other simanim for Rosh Hashanah. 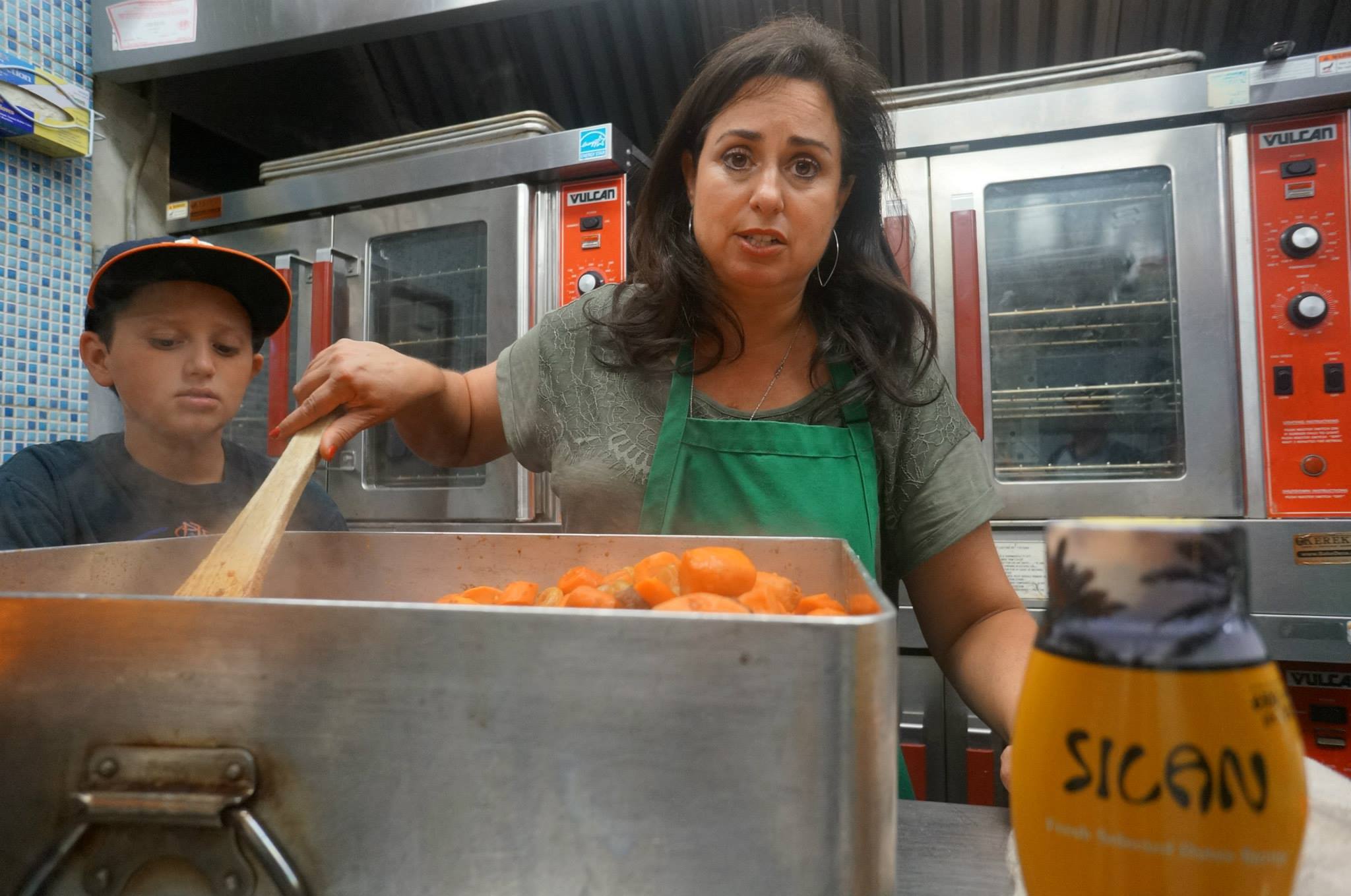 Mr. Rapaport’s bubby used to make tzimmes with caramelized minced onions (his roots are Hungarian with a mix of Vizhnitz and Satmar). She also put kishka into her tzimmes to balance the sweetness, crumbling it over the carrots. Cooks today add everything from orange or pineapple juice or fruit to tzimmes, or dried fruits such as prunes or apricots; some substitute sweet potatoes for carrots (my mother’s Polish family used prunes and orange juice, as well as both carrots and sweet potatoes). 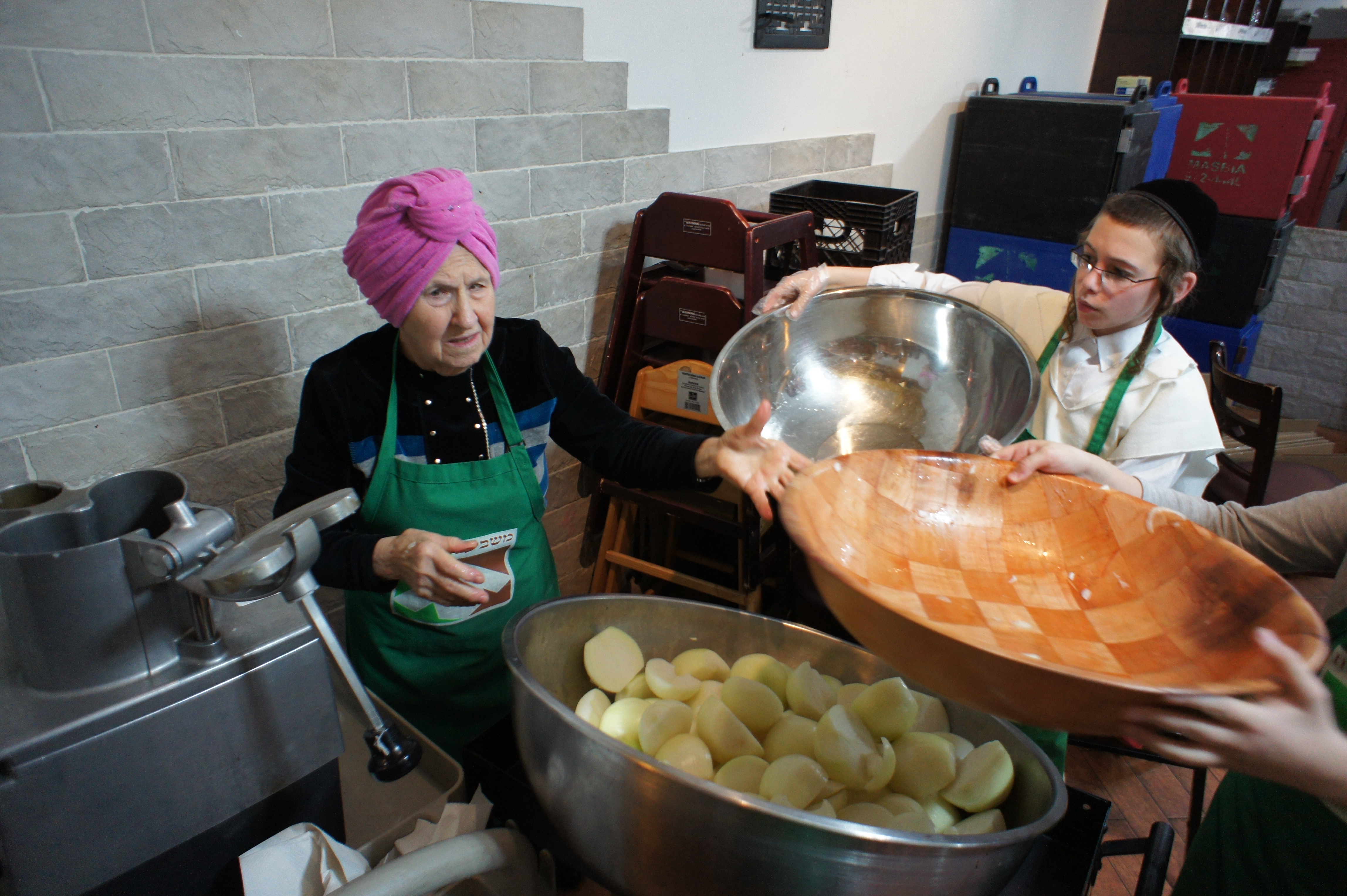 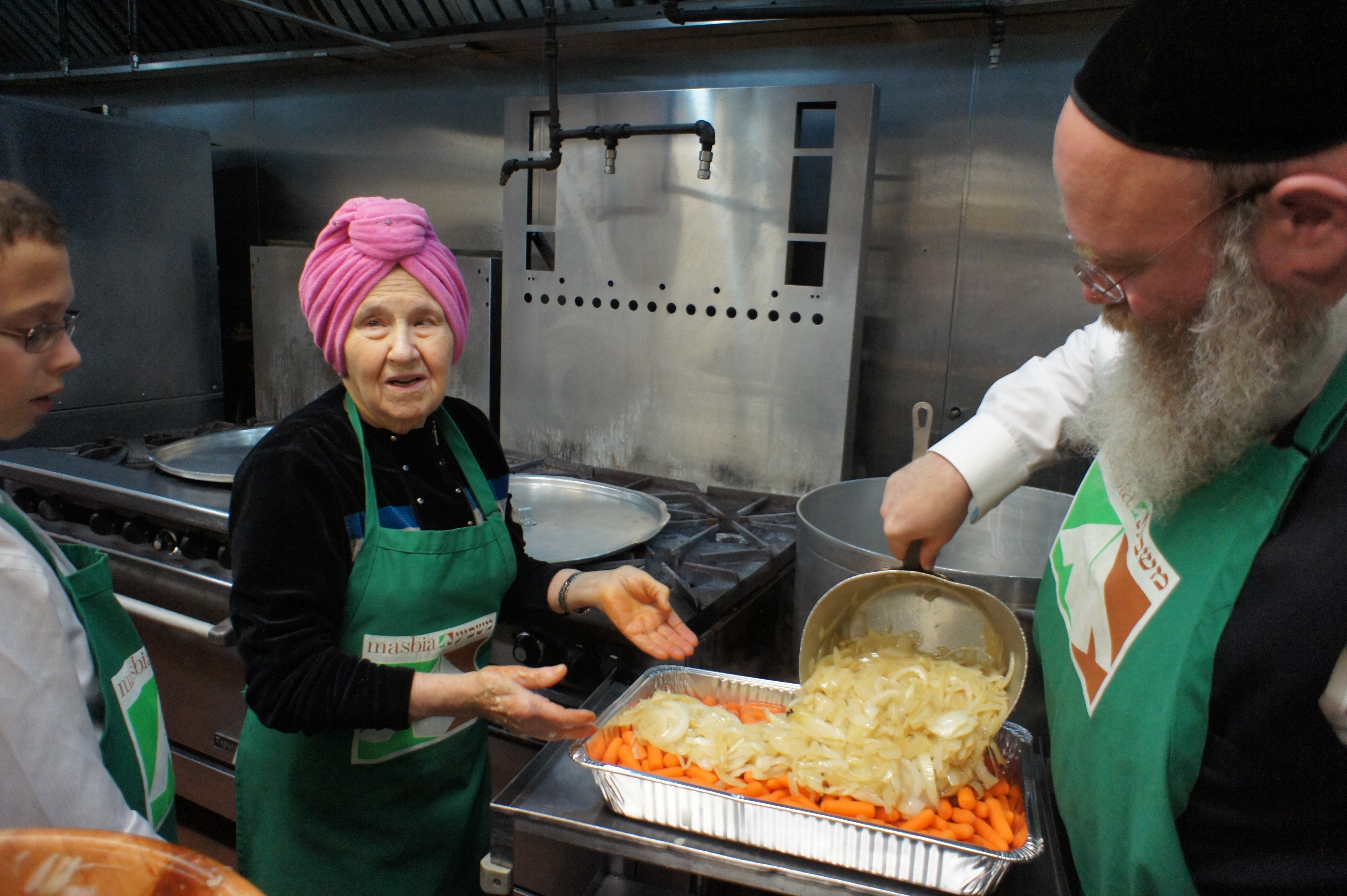 While Masbia’s cook, Ruben Diaz, uses only fresh ingredients, he recommends using frozen or canned carrots to ensure a uniform color and size of the carrot coins (it’s also a good shortcut). He also warns that ground cinnamon can alter the color of your tzimmes, so if you want the added flavor, use cinnamon sticks instead of powder. 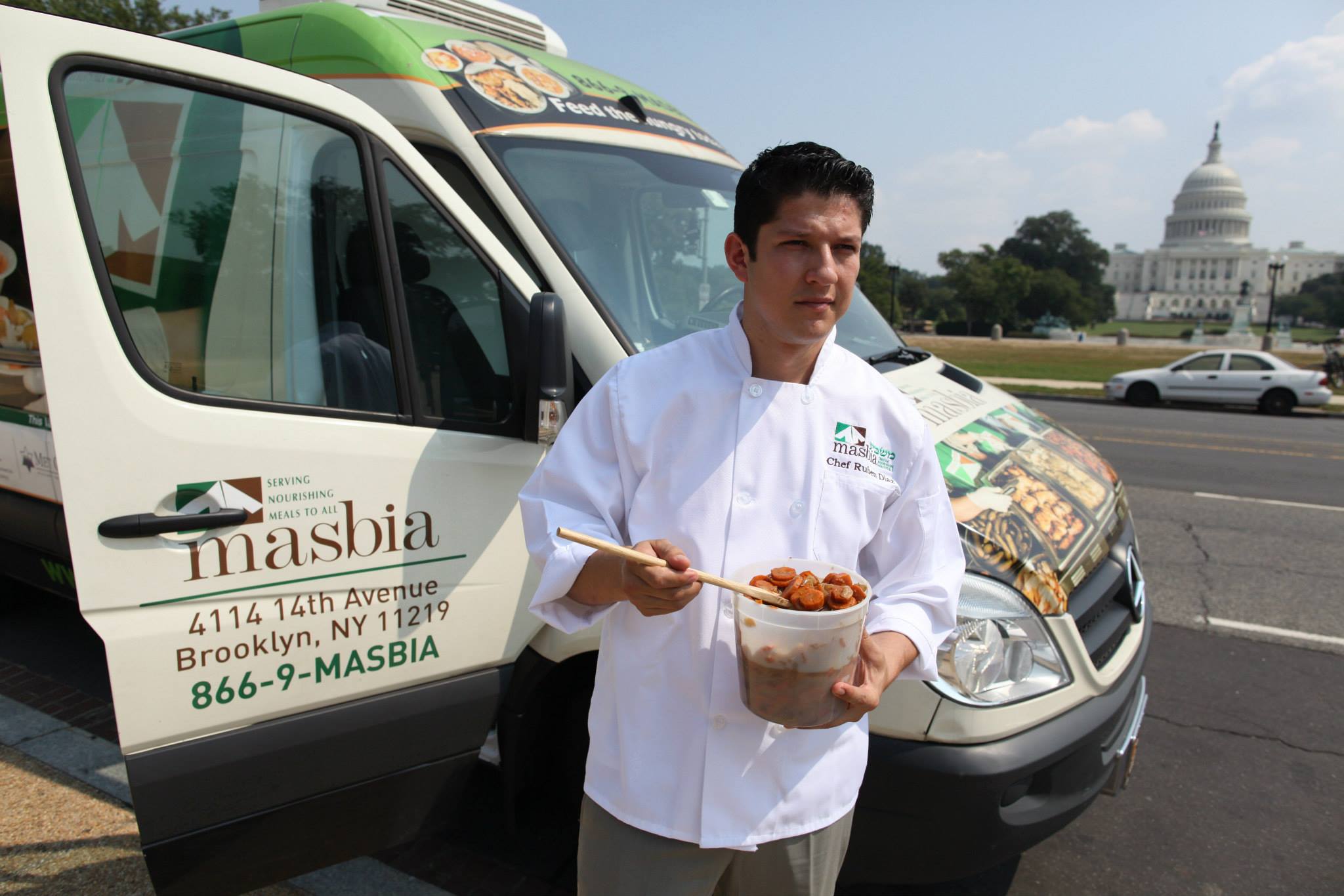 Most Jews are deeply attached to their traditions. But if your family greets tzimmes with a grimace, you don’t have to follow the traditional preparation. Carrots come in many colors — orange, white, yellow, purple — and you can do an upscale version by combining colors. “I recommend roasting them,” Alex Rapaport says. “Purple carrots bleed their color when stewed, and roasting minimizes that.” A little olive oil and salt is all you need. If you have children (or a spouse) for whom vegetables need to be disguised, you could do carrot muffins, or kugel, or tzimmes puffs (à la Susie Fishbein’s recipe in Kosher By Design Short on Time).

In addition to being a siman for plenty and for favorable decrees, eating tzimmes can help ensure a healthy new year: Carrots and sweet potatoes contain beta carotene, which converts into vitamin A and benefits our immune system, vision, and skin. Dried fruits like prunes contain vitamins and minerals as well.