Masbia in the Jewish Press: Amount of People Fed at Masbia Soup Kitchen Network Varies, Depending on Generosity of Donors 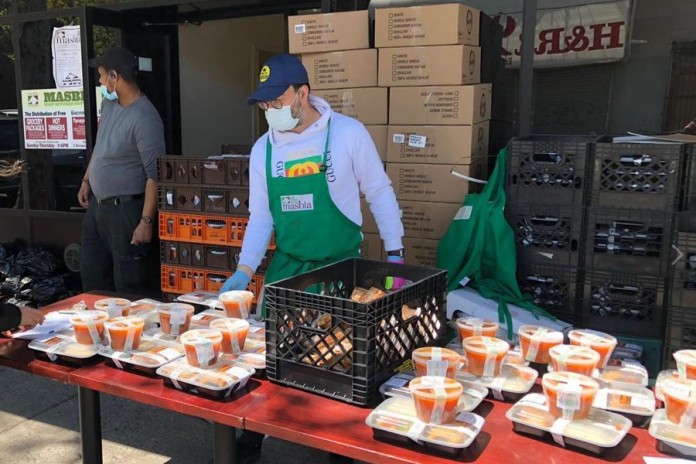 Read the article below written by Laura Allen, in the Jewish Press, on the uptick in demand about 500% at Masbia all three locations due to the Covid-19 pandemic.

Masbia Soup Kitchen Network, the only kosher soup kitchen in NY, has had a drastic increase in demand at all three of its locations since the start of the COVID-19 crisis.

Chef Ruben and his team have been preparing ready-to-eat dinners at unprecedented numbers served to-go for those who come to Masbia’s soup kitchen program. Families who want raw ingredients to cook at home use the appointment-only pantry program, instead.

The Executive Director, Alexander Rapaport, says “At Masbia, when we distribute COVID-19 food relief, we understand we are dealing with people who were used to a typical American diet until their life was disrupted by the outbreak.”  With an uptick in demand of about 500%, Masbia is now using as many as twelve trailers of food per week.  Said Rapaport, “Each week, during the months after the outbreak, we served anywhere between 3,000 to 7,500 families using our appointment system for the pantry program. In the weeks we were able to procure the full twelve trailers, we were able to post 7,500 appointment slots. Other weeks we needed to scale down to as low as 3,000 slots.”

With the high holidays fast approaching, Masbia anticipates seeing an even greater demand as even though the most families they have served in one week is currently 7,500, there are more than 20,000 families registered with their pantries.

While explaining this, Rapaport mentioned “All these numbers only take into account the raw pantry packages that are now done by appointment slots. For the free dinner, we never cap the amount served and give out thousands of ready-to-eat dinners on a daily basis. Chef Ruben and his team, with the generosity of our donors, have never had to turn anyone away and always have ready-to-eat meals on hand.”

While observing the breadline that wrapped around the block, a woman was overheard saying “This is the first time in almost two weeks my children will have chicken”. At another point, there was an older gentleman doing his best to overcome his confusion who was in need of hot meals since his wife passed away just the week before due to COVID-19. There were people in line who had been donors at some point and now found themselves in need of raw pantry packages. Rapaport says there are many different paths that lead to Masbia’s lines, saying “I have a hunch that people who are not on a salary but living deal to deal, cannot get unemployment benefits and if they own their own home, are most likely not eligible for many of the other government assistance programs” He then cited an instance where a former head of operations at a company that happens to be one of Masbia’s vendors and had been let go was having trouble restarting his career at this stage in his life. Once the outbreak hit, he wasn’t eligible for unemployment as he had already maxed out his benefit before the pandemic hit.

It was due to the unprecedented need that Rapaport came up with the idea of crowdfunding trailers, saying, “In a third world country, it’s easy to combat a famine by simply distributing rice or some other grain and putting people on a three-times-a-day regimen of the same food for months and years, but at Masbia we try to give a balanced, nutritious variety of food to people on our breadlines. That’s why we are crowdfunding  trailers, with the help of known foodies, each containing different food items including rice, pasta, chicken, flour, grape juice, oil, and more.”

For more about the trailers, go to masbia.org/trailers. To get an appointment to receive a pantry package, text “FOOD” to 726879.