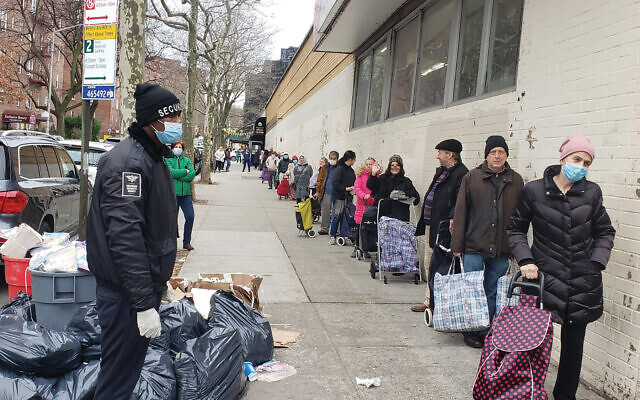 Read the article below written by Steve Lipman, in the New York Jewish Week, about Masbia being tested during the covid-19 pandemic. ED Alexander Rapaport is innovating, just a week ago, Masbia instituted the Plentiful app.

The distribution of free food from a small storefront on a side street of Rego Park didn’t begin until 2 p.m., but the line began forming two hours earlier.

By noon, down the block from Masbia, the soup-kitchen-turned-food-pantry, more than a dozen men and women, some with kids in tow, stood or sat alongside a length of metal NYPD barricades. Pieces of yellow tape on the sidewalk, spaced six feet apart, marked their territory as they spoke on their cell phones, waiting to get their meals for that day — or for the week ahead.

Masbia, which has other locations in Brooklyn’s heavily Orthodox Borough Park and Flatbush neighborhoods, is under Jewish auspices, but the people lined-up last week were a cross-section of Queens, the city’s most ethnically diverse borough.

“Jews, secular, Christians, Spanish, Russian, Indians” — all have taken their place in the line during a typical week since the start of the coronavirus crisis, says Ariel Mulladzhanov, the site’s manager.

The typical recipient is unemployed, probably for only a few months, and never had to seek a handout before, Mulladzhanov says. “A lot of elderly, a lot of immigrants,” she says, many of whom hail from Uzbekistan and other republics of the former Soviet Union. The infirm, those diagnosed with Covid-19, and those quarantined because of exposure to the disease receive newly instituted home deliveries from Masbia.

“The Torah says you serve everyone food,” irrespective of race or religion, says Alexander Rapaport, the 42-year-old co-founder of Masbia.

But that biblical ethic, combined with the surge in need in the wake of the coronavirus pandemic, is testing Rapaport more severely now than at any time during his 15-year run operating the only five-day-a-week kosher soup kitchen in the city. Known as a holy hustler for his tireless fundraising efforts and dedication to the needy, Rapaport has had to pivot overnight from his original, sit-down format to a distribution venue. The three Masbia locations now feed about 40,000 people a week, a four-fold increase since the onset of the coronavirus.

The pre-bagged take-away hot meals and groceries often feed a family for a week; there are frozen meals for people who cannot prepare their own meals, and always fruits and vegetables. Many of the people in line bring carts to lug the food home. In advance of Shavuot this week, Masbia distributed a variety of dairy staples — milk, yogurt, cottage cheese — donated by upstate farmers through the state’s “Nourish New York” initiative. 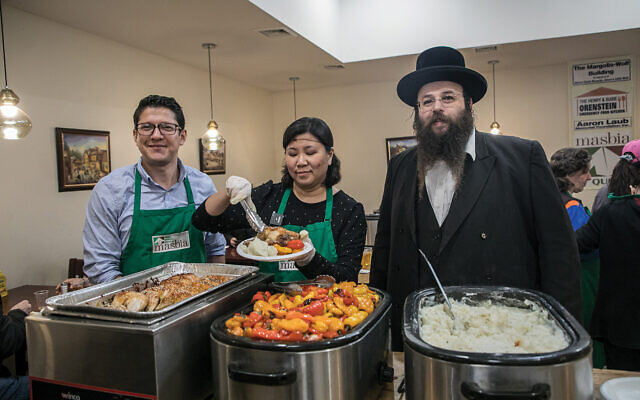 Rapaport says the budget of the Rego Park location alone has ballooned to $100,000 a week, up from $35,000 a week before the Covid-19 outbreak. (He projects his 2020 budget to be $25 million, five times what it was a year ago; 40 percent of his funding comes from the government.)

Since March, calls for help come in all the time. “I’m only sleeping on Shabbos,” Rapaport says. As food banks around the city close, he admits to being unsure about Masbia’s future. By necessity, he is stepping up his fundraising efforts through online appeals and phone calls to sympathetic supporters, many of whom, he says, have upped their contributions. He won’t divulge specifics but he indicated that fundraising has picked up considerably since Passover, when he and his supporters met, amid a mood of pessimism, to consider Masbia’s prospects going forward.

And Rapaport is innovating. Last week, Masbia instituted an app, Plentiful, patterned after one used by the Helmsley Charitable Trust. It coordinates appointment times for recipients to show up and regulates the lines snaking around the block. The appointment system, Rapaport says, “gives people their dignity.”

In Rego Park, because of social distancing rules, recipients don’t step inside the building. “We’re doing everything outside,” Rapaport says. “We have the benefit of God’s purifier [fresh air].”

At the head of the line, located between the rear wall of a Key Food supermarket and the front entrance of a Citibank branch, is Miriam, a Jewish native of Iran in her 40s who lost her job in a dentist’s office as a result of the pandemic. (She declines to share her last name.) Her health is fine, she says, but she was turned down for unemployment benefits. Her husband is disabled and she has limited funds. She came for the first time a few days earlier to receive a week’s supply of food. “It was very helpful.”

Today, Miriam wants to enter the online Masbia system, and she

starts speaking with Vicky Dela-Pena, a Masbia volunteer who enters the information on a tablet. Behind them, on the Masbia front window and piled on a small table, are printed and handwritten notices in English, Cyrillic, Spanish, Mandarin, and Korean offering information about distribution hours, about the site’s health policy (“No mask, no entry”) and about entering the computerized Masbia system. The office of Rep. Grace Meng, the House Democrat who represents the area, helped with some of the translations.

The staff of the Rego Park site reflects the multi-ethnic character of its recipients. Rapaport is driven around to pick up food by a Muslim man. Volunteer Dela-Pena is Catholic. “It doesn’t matter which religion you come from,” she says. “We should all be on our knees in prayer” to deal with the pandemic. She lost her job as a staff manager with the American Cancer Society three months ago and offered her time to Masbia. “It’s what I’m supposed to do.”

As Miriam and Dela-Pena speak, a pair of Chasidic men wheel palettes of frozen meals and barrels of fruit from a nearby van.

Inline behind them, Will, a retiree from Ukraine, says he has been coming to Masbia for five years. “I don’t cook,” he says. He shows up a few hours early every week, he says. He schmoozes with a fellow retiree next to him, from Uzbekistan, who is reluctant to speak with a reporter.

Next in line is Rajkumary Naipaul, a Hindu from British Guiana, who has received her meals from Masbia for two months. In her 40s, she has a heart condition and can’t work. She saw a notice about Masbia in a store. Does she feel out of place turning to a Jewish organization for assistance? No. “I used to work with Jewish people. I like them.”

In recent weeks Masbia has increased its hours of operation, increased security, and hired about 10 temporary workers to replace permanent workers who left the operation early in the pandemic. “They were scared,” Rapaport says.

As soup kitchens and food banks have closed down, “Groups like Masbia play an incredibly important role,” says David Greenfield, executive director of the Metropolitan Council on Jewish Poverty, which helped found Masbia. “Few have the expertise” or the expansive outlook “that Masbia has,” he said. “Their programs are open to everyone.”

Rapaport’s instinct to help those in need was formed early on. He tells about hearing stories when he was a child from his grandmother, a Holocaust survivor who interned in “every horrible camp that existed.” Yet she somehow managed to feed people in the camps. “She stole beets from the SS” and begged potato scraps from local farmers, all at the risk of her life. “I get no Schar [heavenly reward] for what I do,” he says. “For me, this is as natural as it can be. This is in my DNA.”

With the sit-down operation temporarily on hold, Rapaport concentrates on coordinating the operation of the three Masbia sites, supervising their staff of 10 paid employees and three dozen volunteers, ordering food, cajoling suppliers to donate what they can, raising money, and inspecting the supplies to ensure that they are fresh and of high quality.

“I pay a lot of money,” he says, “because I want good meals, a good hechsher,” or level of kosher supervision.

In the “3,000-plus”-square-foot basement of the building, Rapaport, wearing a white KN95 mask and clear latex gloves, shows a visitor stack of rice bags, canned tuna, canned tomatoes, Cheerios…. The stacks extend as far as the eye can see.

“This is considered a ‘depletion,’” he says. More supplies are due soon, to fill the few available spaces.

Inside a pair of “mega-mega” freezers that Rapaport had installed, he points to stacks of kosher meals that were intended for canceled airline flights. The “ready-to-eat” goods come from Borenstein Caterers, which donated some and sold others “at a very good price,” and from Lou G. Siegel Catering.

The tour of the building over, Rapaport climbs the staircase he had installed to facilitate deliveries. It’s 7:30 p.m., a half-hour past closing time. A few weeks earlier, there would have still been people in line, he says. The computerized system has reduced congestion.

“This is a good day,” Rapaport says. People are probably still in the line in Borough Park and Flatbush, he adds, a situation that, as the coronavirus pandemic drags on, will probably play out at the Rego Park location too in the coming days. “The need is there.”