Masbia Relief On Aish.com: In The Wake of Deadly Tornadoes, NY Jews Go To Kentucky To Provide Relief 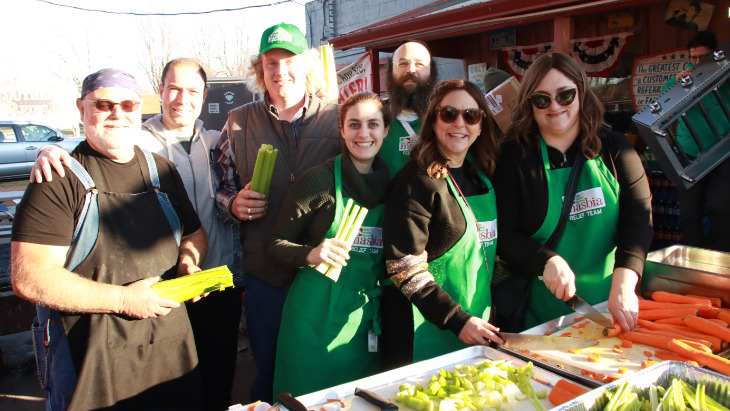 Within four hours of a deadly tornado hitting the town of Mayfield, Kentucky in December, Micah Seavers’ family-owned restaurant, Southern Red’s Barbecue, was preparing meals for the emergency workers who were streaming in to help. It was about 2:30 am.

By daylight, they were handing out meals to friends and neighbors who had lost everything. In the days that followed they made it their job to feed everyone who needed a meal, even delivering dinners in the dark as electricity was out for miles.

By some estimates, Red’s Southern Barbecue has served some 80,000 meals since the tornadoes hit. Normally, they serve about 2,500 people a week; a number that includes catering clients.

“We are a small, old family business,” says Seavers, whose home and restaurant are outside of Mayfield and wasn’t in the storm’s path. “We had stretched our equipment to the max and we lost some equipment… It was a struggle.”

But they were determined to go on as they were luckier than many. A string of tornadoes rocked six states on the evening of Dec. 10 carving a crushing path of destruction along the way. In Kentucky alone, more than 70 people died when the storms struck. Mayfield was one of the worst-hit areas.

Some 970 miles away to the east, in the heavily Chasidic neighborhood of Boro Park, N.Y., Alexander Rapaport heard about the devastation and the lack of water and electricity and had an idea of how he might be able to help the people in Mayfield. The head of the Masbia Soup Kitchen, which feeds some 1,500 people each day for free, Rapaport’s organization had started a relief arm to help when disasters struck.

“Since Hurricane Sandy hit New York and New Jersey in 2012, we have been responding to disasters big and small from local fires to sending food after a hurricane,” Rapaport explains. “In this situation, I had a friend at Future Diagnostics USA who has lots of sanitizing supplies – personal wipes, surface wipes, hand sanitizers – and if people have no water or electricity, these are important items. So I called up my friend and said can you donate some to send to Kentucky, and he said yes.”

He also reached out to Manischewitz and Kedem for food donations. With food and sanitizers arranged and donors stepping up to pay for the tractor-trailers to send the goods to Kentucky, a reporter connected Rapaport with Seavers, who was glad for the donations.

“We were thankful because we are a small business and we hadn’t reached out to anyone for funds,” says Seavers. “It doesn’t matter creed or culture, people are people in our eyes and we were just thankful to have the help.”

“It was important to me that we make a presence there, that we show up, men with payot (side curls) and yarmulkes (skullcaps) and women in sheitels (wigs),” Rapaport explains. “I wanted it to be visible who was sending this because more than the supplies and food themselves, there is a solidarity that comes from being there. It’s the spirit and the hope that people from far away care and believe we deserve support. It was important for us to go there, to work in the trenches, to deliver meals to people, and to put these friendships together.”

The first thing Rapaport and his group did upon landing was head to a culinary store to pick up cooking supplies for Seavers’ restaurant. While he was in the store, Rapaport called Seavers on his cell phone. As Seavers recounts, Rapaport “held up his phone and was turning around the store at different things and said, ‘Tell me what do you need?’ I said, ‘Sir, I don’t ask for things.’ It was the hardest thing to have this man ask me to tell him what I need.”

But Rapaport urged him on. “You tell me what you need and we are bringing it.”

Among the list of items bought by the Masbia Relief team were cooking tins, food storage containers, spices, and pots – including one that Seavers says holds 70 pounds of green beans and cooks almost instantly.

Once at Red’s, the group got to work. “We are Americans helping Americans,” says popular kosher food personality and travel blogger Naomi Nachman who went on the Masbia mission with her 23-year-old daughter Gabriella.

“These people have the nicest, biggest hearts,” she says, “these people have a successful catering business and just stopped their business to turn it into a relief center, cooking up food with the supplies coming in from all over the country, including our Masbia food.”

“They could not stop thanking us, and many of them had never seen a Jew before, yet they were so happy we were there. It was very, very moving and a real kiddush Hashem [a sanctification of God’s name] to be there.”

The group from Masbia weren’t the only Jews to help the residents of western Kentucky. Almost immediately after the tornadoes hit, Rabbis Shlomo and Chaim Litvin, brothers and Chabad emissaries in Kentucky drove a tractor-trailer loaded with brand-new winter clothes, from their social-service agency Project Friendship, along with pallets of bottled water donated by the Israel Consulate to the Southeastern United States to hand out to people. Also, the Jewish Federation of Louisville arranged a fund to help the American Red Cross. That fundraised in excess of $100,000.

“The first needs were immediate, emergency shelter, and we’re still dealing with that,” says Seavers, “but we are also getting the day-to-day needs met for the seniors, the people with special needs, people who can’t leave their homes but have no electricity. We as a community are going around to knock on every door and make sure everyone has what they need.”

“A storm doesn’t hit rich people or poor people, it hits everybody, everyone is on an even playing field. It’s just how you come together to rebuild,” says Nachman. “People there really care and I feel like I have new friends. I told them I want to come back. It doesn’t end now that we left and went back to our normal lives. We went down, but we need to follow up.”

That sentiment was echoed by Rabbi Simon Taylor, national director of community projects and partnerships for the Orthodox Union, which is perhaps best known as the world’s largest kosher food supervising agency.

“Every single one of families and volunteers said to us, ‘It’s all very well that everyone is here now to help, but in a month’s time, people will forget and not be here,’ ” he recalls. “There are still months and months and years’ worth of work to be done and they are concerned they will be left in the lurch.”

Taylor told to his colleagues in New York, “We need to do something more.”

To that end, the Orthodox Union is already making plans for groups to come and lend a hand.

“The people we interacted with were emotionally brought to tears by the fact that Jewish people from the otherwise of the country cared so much and wanted to come and help them, to the point that they wanted to give back to the Jewish community,” continues Taylor.

“The Masbia kitchen, the help that they brought us, was amazing,” said Seavers. “It really truly made such a difference now in how we are cooking. We’re not good at sticking our hands out and asking people for help and money, but Mr. Rapaport said sometimes you just have to ask and to have these needs granted. We want to make sure that how we use the money and equipment, that everything we do is 100 percent and right in people’s eyes. Integrity is very important.”

Seavers hopes to repay the kindness shown to him by the folks from Masbia by helping out in the soup kitchen at some point. “I have a strong back and I can cook, I know they keep kosher but I can scoop food into a bowl. I will show my appreciation somehow.”