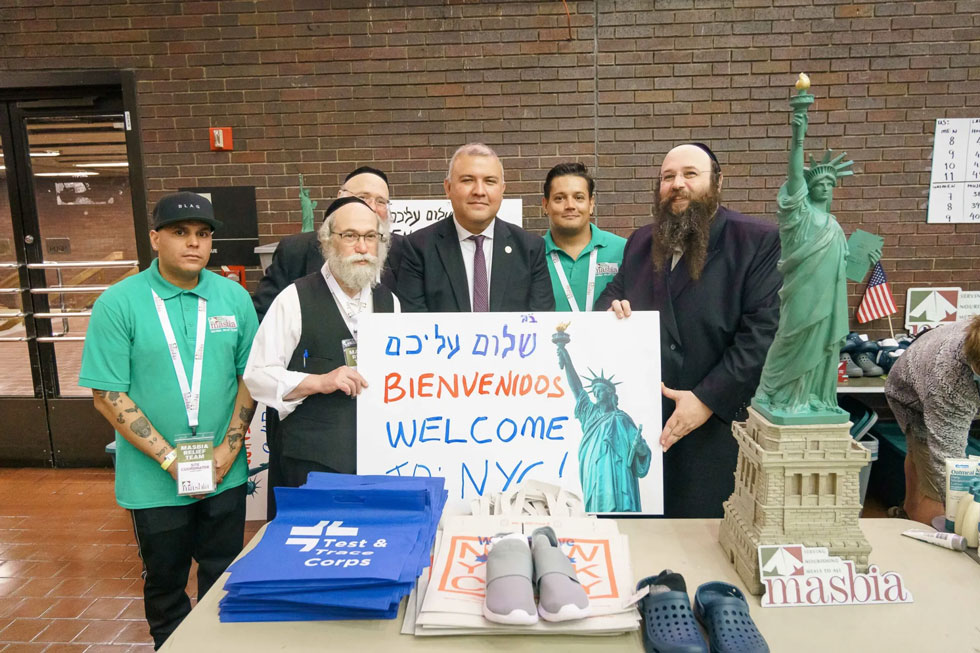 The Masbia Relief Team jumped into action to help the asylum seekers that have been arriving at the Port Authority Midtown Bus Terminal. Asylum seekers have been arriving in New York City in the last few weeks in very distressed conditions. They arrived hungry and barefoot, having lost everything during their long journey on the way to the US. Mabia Relief came to help out and give them basic human dignity such as shoes and food, and other emergency supplies, as they stepped down from the buses to start their resettling process here in New York.

Asylum seekers have been arriving in New York City in the last few weeks, and after a meeting with members of the Mayor’s team at City Hall and the Mayor’s Office of Immigration Affairs, it was established that Masbia Relief would take on the task of providing emergency shoes with some food and toiletries to hand out to the men, women and children as they come off the bus, mostly barefoot and hungry.

The Masbia Relief Team has been to Port Authority several times – mainly in the early morning around 5 AM – to distribute those desperately needed items. As buses pulled up with hundreds of asylum seekers – many of them children – there were cheers and applause and signs of welcome written in English, Hebrew and Spanish. Many of these asylum seekers arrived barefoot. Some were barely dressed. Almost all were hungry and thirsty.

The sight of the asylum seekers disembarking from the buses with almost nothing was a heartbreaking look at the gravity of their situation. They have come a long way – literally thousands of miles. “As descendants of people who arrived in New York harbor seeking asylum, it is simply the right thing to do for new migrants 70 years later”, said Masbia’s Executive Director, Alexander Rapaport, who is the grandson of Holocaust survivors who migrated to North America after WW2.

“The idea is to help people turn the page and start their new beginning here in New York in a better way. To make sure that during their first steps in New York they are no longer barefoot, we are providing them with new shoes as well as food and toiletries”, said Alexander Rapaport, Executive Director of the Masbia Soup Kitchen Network. He continued, “The journey ahead of them is still going to be challenging but we want to plant the seeds of change in their luck and give them their basic humanity back.”