Alexander Rapaport, executive director of Masbia, went to airports to tell TSA agents about the three city locations where they can be served, including at 105-47 64 Road in Forest Hills. 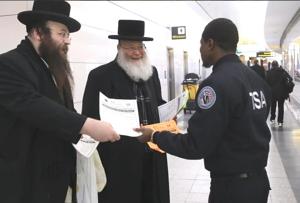 PHOTO COURTESY MASBIA SOUP KITCHEN: Alexander Rapaport and his father, Yosef, hand out fliers at LaGuardia Airport to TSA agents informing them of meals at Masbia.

“Our challenge all the time is figuring out how the people who are in need the first time, going from not needing charity to needing charity, to at least know where to turn to,” Rapaport said.

Watching the news, he thought something should be done after seeing workers were missing paychecks.

“You can tell your landlord you’ll get paid and you’ll pay off your rent but you can’t negotiate that with your stomach,” Rapaport said.

So he and some volunteers went to the airports and gave out information about where the workers could go for a meal.

“It’s almost impossible to make a TSA worker smile,” Rapaport said. “It’s kind of that tense moment, they go through your bag — and we made dozens and dozens of them smile.”

Rapaport said showing up and telling them about the meals shows workers they’re not alone and that people care about them.

“It’s those smiles I cherish most,” he said.

Rapaport believes the Forest Hills location will see the highest number of workers compared to its two Brooklyn spots because of its proximity to the airports.

He said so far there’s been “a trickle” of people coming to the Queens site.

“I don’t think people are already at a point where there’s nothing in their house yet or they’re comfortable with getting a charity handout,” Rapaport said. “We just wanted to make sure when that does happen that they know where to go to.”

Awareness is his goal, as he stated it is important the information is spread before there is a real need in case the government shutdown continues. The meals at Masbia are for anyone, not just federal workers, but Rapaport thought it helpful to let the workers know about the locations they might not otherwise have been aware of.

People in need can be shy about going into a soup kitchen, according to Rapaport, even if it is through no fault of their own. He believes the federal workers could be more receptive due to the situation.

“Because it’s a national thing and the people who are in need at this point don’t feel so much at fault, it might be easier for them to get to this point but it’s still very hard,” Rapaport said.

Councilman Chaim Deutsch (D-Brooklyn) tweeted, “Amazing! Alex Rapaport & Masbia volunteers have been at @LGAairport handing out flyers for FREE groceries and hot meals for federal employees affected by the shutdown. This is a true kiddush Hashem (sanctification of G-d’s name).”

Everyone is entitled to a free sit-in dinner nightly and a take-home grocery package once a week.

No ID is necessary. Masbia is closed on Fridays and Saturdays.