On a sprawling piece of land near the shores of Lake Erie in rural Huron, Ohio, you’ll find the Chef’s Garden, an innovative farm dedicated to growing high-quality crops through natural and environmentally-friendly practices. True to its name, the farm is focused on providing specialty and heirloom vegetables, herbs, microgreens and edible flowers to the most esteemed chefs and restaurants around the world. Their Earth-to-Table™ philosophy focuses on the health and nutrition of the soil first as the foundation to growing high-quality, ultra nutrient-dense crops, using techniques that are somehow both as old as times and incredibly innovative at the same time. 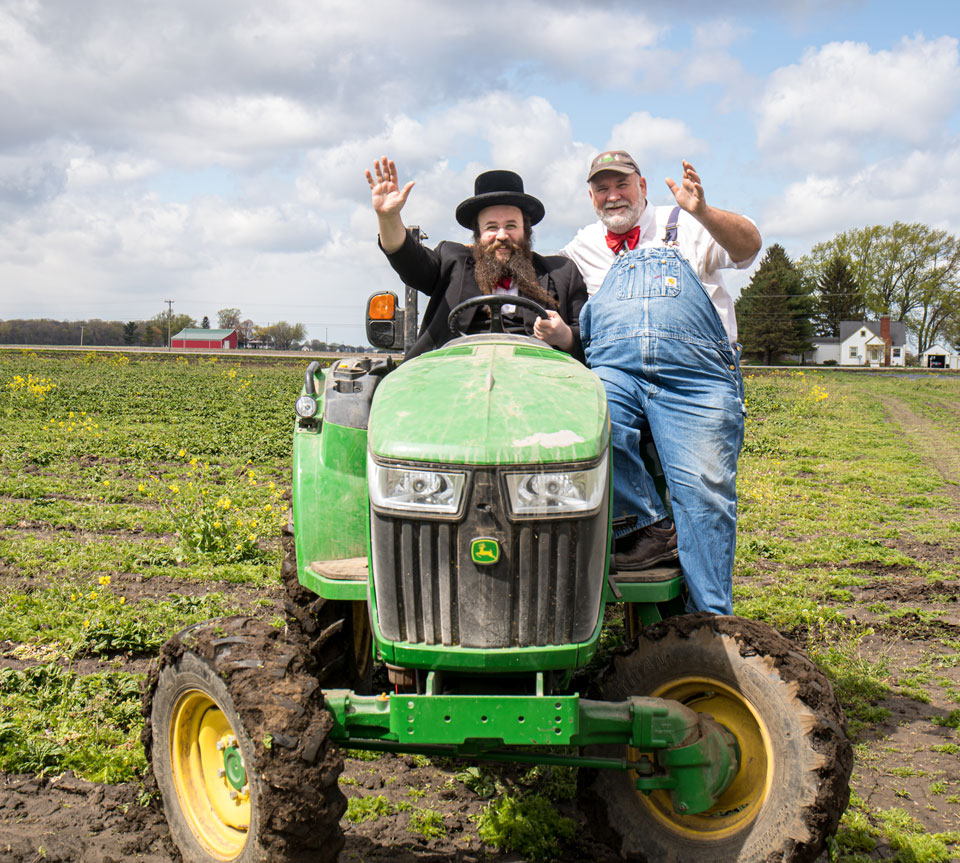 co-founder and face of the Chef’s Garden, grew up with farming in his blood. His parents learned the value of growing vegetables for flavor and quality instead of yield, even if they could not have foreseen a time when food trends would pivot towards vegetable-centric menus and sustainable farming practices. Everything about Farmer Lee represents the archetypical all-American farmer, from his jovial smile to his signature look. “Farmer Lee is an American icon, not just because of his shirt, bow tie and overalls, which are as American as rhubarb pie. It’s because he truly believes in the soil of America, the chefs of America, the culinary culture of America,” writes Chef José Andrés in the foreword of The Chef’s Garden’s new eponymous vegetable-focused cookbook.

BEYOND JUST THE differences in clothing, it is the stark contrast of culture that makes the alliance between Farmer Lee Jones and Masbia Kitchen’s Alexander Rapaport so unexpected. A Hassidic Jew from Brooklyn with long sidelocks and a traditional black velvet hat might be the last person you’d expect to find perched atop a tractor at the farm. After years of serving the needy communities in Brooklyn with a soup kitchen that functions “like a restaurant without a cash register,” as well as food pantry that serves thousands per day, Masbia caught the attention of national news outlets as well as the team behind The Chef’s Garden.

“We believe in serving every person who walks through our door with dignity and respect, no matter who they are, with no questions asked,” says Masbia founder Alexander Rapaport. “It’s not a cafeteria,” adds Masbia CCOO (Chef Chief Operating Officer) Jordana Hirschel. “Every dinner, consisting of high-quality, freshly cooked food, including bread, soup, a main, two sides and dessert, is served on real plates and brought out to the table, where diners sit on real chairs” 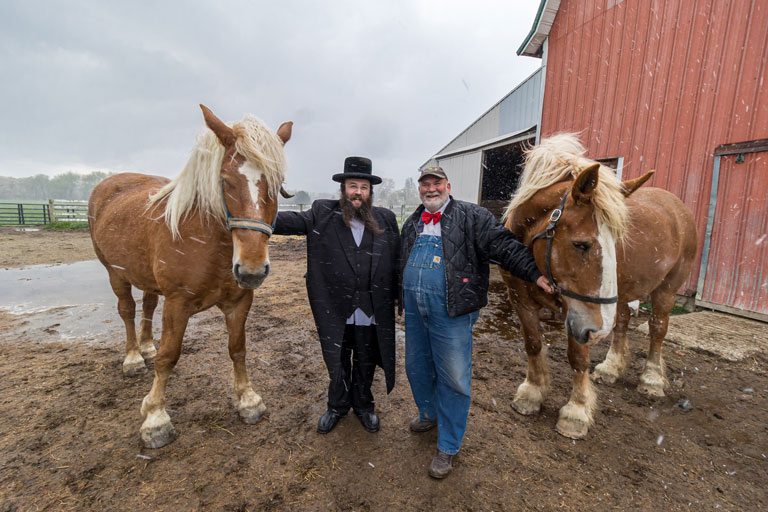 As The Chef’s Garden planned their Roots conference back in 2014, inviting chefs from all over to discuss the future of food and cutting-edge new trends in farming, they knew that charity in the food world was an integral element to include, Mr.Rapaport was invited to join the conference and participate in a panel to discuss the importance of maintaining a focus on quality of food and respect to diners in a charity setting.

This began a years-long partnership that continues to this day. While The Chef’s Garden mostly sends its meticulously-wrapped prime produce to chefs of high-end restaurants, they continue to ship cases of produce of the same quality to Masbia Kitchen as well, taking into account the needs of a kosher soup kitchen and selecting the items that will be most useful. “I don’t believe that just because someone can’t afford to pay for their meal, it should mean that they have to eat rich people’s trash”, says Mr. Rapaport. With an expansive refrigeration unit, the food pantry in each Masbia location offers much of the produce for people to take and cook at home as well.

When the pandemic and accompanying economic recession hit last year, in-person dining at the soup kitchen went on hiatus while demand at the food pantries soared by over 500%, prompting Masbia to remain open 24 hours a day to fulfill the demand. The organization, which is primarily funded through donations (and supported by many volunteer workers), turned to the community to raise the funds so desperately needed to keep the operation running.

The Chef’s Garden’s newly released cookbook provided the perfect opportunity for collaborative fundraising that could reach a nationwide audience. The book serves as a bible for the world of fresh produce, opening readers’ eyes to new techniques and the potential to transform vegetables into dishes such as Ramp Top Pasta, Seared Rack of Brussels Sprouts, and Cornbread-Stuffed Zucchini Blossoms and even sweet concoctions like Onion Caramel and Beet Marshmallows. “I wanted to offer the cookbook as a gift to our generous donors, and although it primarily celebrates vegetables, I knew that some would be uncomfortable with the non-kosher recipes found inside,” says Mr.Rapaport.

[The Chef’s Garden: A Modern Guide to Common and Unusual Vegetables by Farmer Lee Jones is available for purchase on Amazon for $46.40.

The kosher companion to the cookbook, produced by Masbia, offers chef-approved recipes with kosher alternatives. 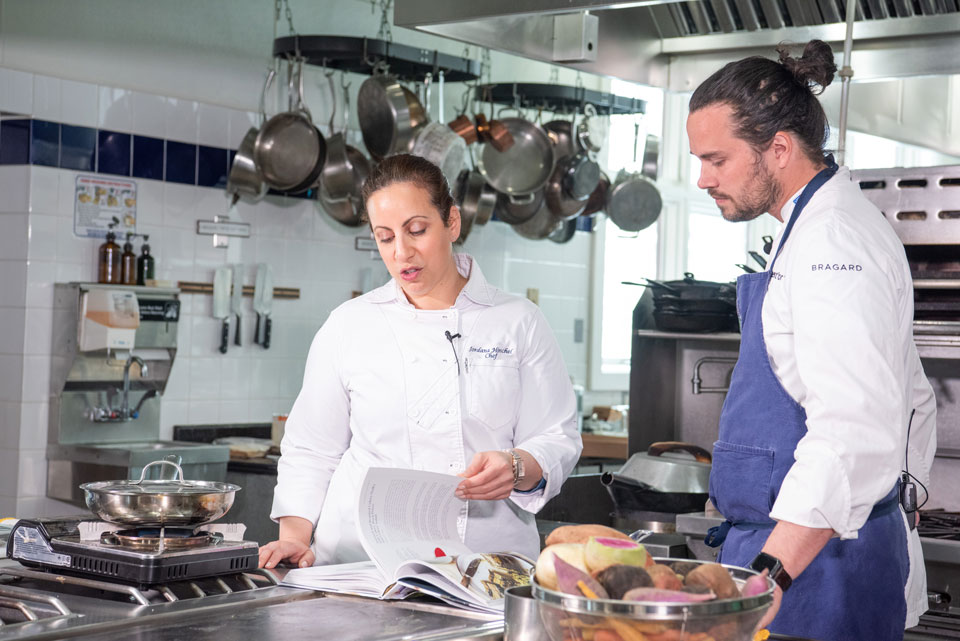 Thus began the first-of-its-kind collaboration between Chef Jordana Hirschel of Masbia, who spearheaded the project, and Chef Jamie Simpson of The Chef’s Garden, who had developed many of the recipes for the cookbook, to create a companion for the book aimed at helping the religious consumer adapt the recipes for the kosher kitchen, bridging cultures and working together to raise funds for the organization. Chef Jordana worked on the recipe development with assistance from other notable chefs in the kosher industry, including Chef Bryan Gryka and Chef Joshua Massin, while remaining in close contact with Chef Jamie to ensure the adapted recipes remained true to the essence of the original versions.

“Some were simple swaps, but there were others that were a lot more difficult,” explains Chef Jordana. “The very first recipe in the cookbook is a cornish game hen glazed with an onion caramel sauce made with butter and heavy cream. Sure, some would just use margarine and non-dairy creamer, but the whole focus of the book is on using real and natural ingredients.” After Chef Jamie explained that the exquisite onion caramel sauce was the true focus of the recipe, the chefs brainstormed together and came up with an adaptation of the recipe that keeps the glaze as is, but uses it to glaze a roasted butternut squash instead of a cornish game hen.

Mr. Rapaport and Chef Jordana traveled to the farm, along with a few other members of the Masbia team, staying in the beautiful log cabin-esque Chef’s Suite above the Culinary Vegetable Institute, a key feature of The Chef’s Garden enterprise. With a kitchen equipped with the most premium culinary tools, chef’s from prestigious restaurants regularly come to visit the CVI to experiment with all the unique produce the farm has to offer, bringing new ideas and recipes back home. Chef Jordana spent time touring the farm, speaking to Chef Jamie and Farmer Bob Jones (Farmer Lee’s brother) about the science of farming and experimenting with kosher versions of some of the recipes from the cookbook - an immersive and informative experience that will be available to Masbia supporters at the highest donation level. “We know we are on the right side of history producing a book highlighting vegetables and putting them on the pedestal they deserve. Even though some of the recipes call for meat, it is the vegetables that are the North Star guiding us conceptually in this project,” says Chef Jamie. “Our goal with this collaboration is to help Masbia raise money and awareness for the unbelievable work they do for the people in need. We are eternally grateful for the opportunity,” he adds. 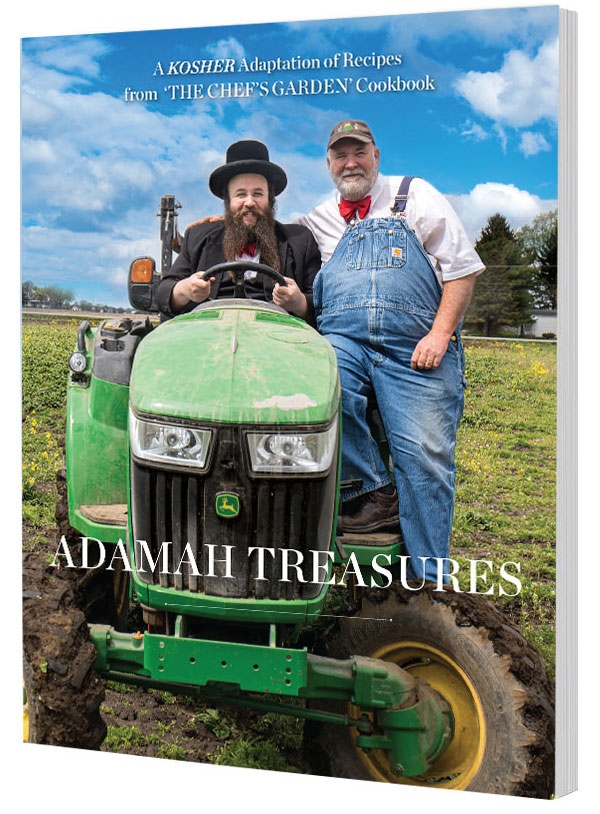 [Chana Zelda Weiss is a mom of three, full-time support manager and freelance food editor in Pomona, New York who loves to cook and entertain. You can find her and her sister DL on Instagram @thosesisterswhocook.