Masbia Relief In The Jewish News: Greeting Migrants, “We’re All children Of Immigrants” 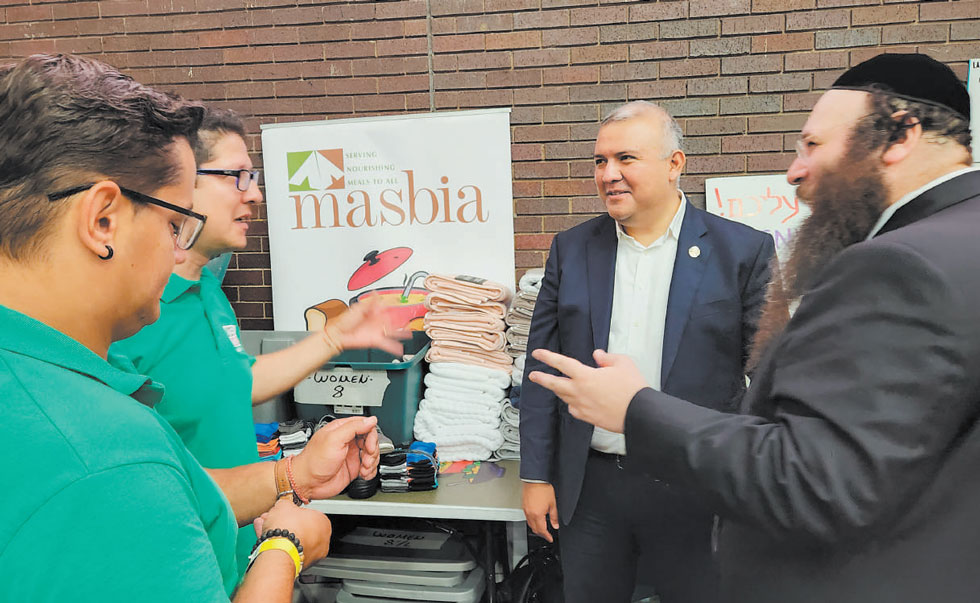 Sometimes 100 or more migrants arrive in New York City in a single day. Several times in the last few weeks, volunteers of Masbia (masbia.org) were at Port Authority to greet the migrants as they disembarked, usually in the early morning.

The migrants “say they’ve never been welcomed like this, including in Texas,” says Shaina Coronel, spokesperson for the mayor’s Office of Immigrant Affairs.“They see New Yorkers of all backgrounds coming together.”

The identifiably Orthodox Jews, recruited on short notice by the co-founder of Masbia to make the trek in the dark from their homes in Brooklyn to mid-Manhattan, have literally put a human face on the human costs of a national controversy that has pitted conservatives, who favor tighter immigrant admittance policies, against liberals, who support the Biden administration’s looser ones.

Abbott, who is thought to have presidential ambitions and has raised his national profile this year, has drawn outspoken criticism from New York Mayor Eric Adams.

He says the large number of migrants who have come in the last month stretch the capacity of the city’s homeless shelters and put a strain on the city’s budget; he has said he will request funds for this from the federal government.

Abbott is a Republican; Adams, a Democrat.

Critics of Abbott, who is engaged in an election race with Beto O’Rourke, a former member of the House of Representatives, said he is using the migrants as human pawns.

He counters that the migrants go willingly to the Big Apple, signing waivers before they start the arduous, 2,000-mile, 30-40-hour trip.

Masbia’s work at Port Authority “is not politics,” not part of the debate, Alexander Rapaport, Masbia’s executive director says; the organization does not take a stand on the migrant issue.

“These are human beings,” he says. “They need help. This should not be an issue.”

Rapaport himself often is among the Masbia representatives at the bus terminal passing out the items he has bought.

Fortyish, Rapaport was raised in a Vizhnitz Chasidic home in Brooklyn and has become a visible symbol of New York City’s Haredi community, usually before Jewish holidays, when Mas-bia increases its food distribution activities, and after international tragedies, which increase the need for humanitarian aid.

In New York, where Jewish poverty, especially in Haredi circles, is a major problem that is frequently overshadowed by food insecurity among other religious and ethnic groups, Masbia was formed by Rapa-port and fellow Chasidic Jew Mordechai Mandelbaum in an effort to fill people’s stomachs and preserve their dignity.

From modest beginnings, the organization has grown to three sites (two in Brooklyn, one in Queens) that, pre-COVID, fed 40,000 people a week, as a “restaurant” with waiters that — prompted in part by the quarantine requirements of the pandemic — is now a take-out food pantry.

Masbia bills itself as the city’s only five-days-a-week kosher soup kitchen.

Masbia is Hebrew for “satiate.” Rapaport, under whose direction Masbia has reached out in recent years to refugees from Afghanistan, tornado victims in Kentucky, and people displaced by an earthquake in Haiti, says his efforts for the migrants who crossed the border into Texas grow out of Jewish ethics and his family’s history.

“We’re all children of immigrants,” he says.

Masbia turned up at Port Authority a few days after the migrants started to arrive from Texas. “We scrambled.”

First, Rapaport says, he had to arrange his activities with City Hall. Was Masbia needed? (“Yes.”) What items did the migrants need? (“Shoes.”) When would their buses arrive? (City officials gave Rapaport their schedule.)

When he got his answers, he had to persuade an Orthodox friend who owns a truck rental company to provide some trucks on a Sun-day to shlep free items.

He had to call other friends in the Chasidic community and ask them to go with him on shopping trips and to Port Authority.

“It’s a pop-up situation” — neither the city nor humanitarian agencies like Masbia anticipated the massive need created by hundreds of migrants, Rapaport says.

“The immediate need, it turned out, were shoes,” he says. Many of the migrants, leaving their hometowns, had to leave their belongings behind; or they lost their property on their way to the US border; or their shoes were damaged beyond use during the trip.

“They went through hell on earth,” Rapaport says.

He and two Masbia staff members went on a shopping spree. They filled up at least six shopping carts full of shoes and warm socks. “We cleaned out six New Jersey Wal-marts.”

Not knowing the shoe sizes of the people he would meet, Rapaport bought a variety of sizes. Their “first steps in New York should not be made barefoot,” he says.

Rapaport established a separate fund-raising account for the help-at-Port-Authority campaign.“It cost a lot,” he says, not offering an exact figure.

This is on top of Masbia’s annual $2 million operating budget. Ten percent comes from government aid, the rest from private donations.

One more thing Rapaport bought was a few-feet-high Statue of Liberty, which graced one of the Masbia tables in Port Authority, to remind the migrants who came by bus of those who had arrived by boat more than a century ago and saw the famed statue in New York Harbor.

Rapaport’s relatives were among earlier immigrants to the US. He is the grandson of four Holocaust survivors who settled in Brooklyn and Montreal after WW II.

He tells about hearing stories when he was a child from his grandmother, who interned in “every horrible camp that existed.”

She told her grandson that she managed to feed people in the camps, stealing “beets from the SS” and begging for potato scraps from local farmers.

That motivates his Masbia work, he says. “This is in my DNA. It feels very good to give back.

“As descendants of people who arrived in New York Harbor seeking asylum,” Rapaport says, “it is simply the right thing to do for new migrants 75 years later.

“The Torah says you serve everyone food, irrespective of race or religion.”

“Some people think we [haredi OrthodoxJews] care only for our people. That’s not the case,” says Shmiel Yaacov Mehring, another member of the Vizhnitz community who greet-ed the migrants at Port Authority.

Mehring, Rapaport’s father-in-law, who worked in the shoe business, assisted in the shoe distribution; he’s an expert in judging a person’s shoe size at a glance. He was doing “something for humanity,” he says.

Masbia joined volunteers from a few other refugee-protection and human rights organizations, both Jewish and Christian and religiously unaffiliated, in greeting the migrants.

The migrants’ reaction at Port Authority to the help provided by Masbia? “Very emotional,” Rapa-port says. “Some of them start crying. Some of them cross themselves.”

The need for Masbia to greet migrants at Port Authority does not seem likely to end soon.

New York City will keep on finding housing for them here or arranging to send them to relatives in other parts of the country, according to Adams.

“NYC will continue to welcome asylum seekers with open arms, as we have always done,” the mayor’s spokesperson Fabien Levy said on Twitter.

And Masbia will continue to greet the migrants arriving from Texas as long as the buses carrying them roll in, Rapaport says. “Sure.”

Some members of the community in Rapaport’s Brooklyn neighborhood are not accustomed to his very public ecumenical approach to helping non-Jews.

“It’s a teachable moment,” he says. “They’re going to get used to it.” 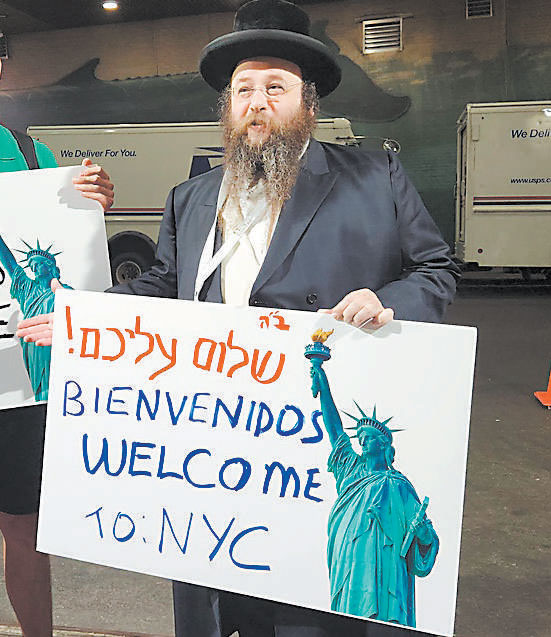