Forward: Mezuzah from a Million Meals

Alexander Rapaport, Executive Director of the Masbia Soup Kitchen, has had a busy year. His soup kitchen, with sites in Flatbush, Coney Island, and Rego Park (Queens), recently overcame months of delays to open a new site in Boro Park. According to their website, they have also “had an almost 350% increase in meal distribution over the past 3 years,” and one more blessing for Rapaport and Masbia has underscored their year of growth.

Masbia depends largely on private donations, and after receiving new tables from Susie Fishbein, the famous Orthodox chef and author of ‘Kosher by Design’ cookbook, Rapaport had some decisions to make about the old tables. He didn’t want to get rid of them because of their sentimental and religious value, but he wasn’t sure what to do with them. That’s when Alex Aronov came to mind.

Aronov makes a living by handcrafting Judaic objects from wood, and had developed a relationship with Rapaport in the past by donating proceeds from Purim groggers and other items to the Masbia Soup Kitchen. “He called me up and asked if I was willing to work with a bunch of tables that he had,” Aronov recalled. “That very day I grabbed one and brought it to my shop and cut it down.”

According to Aronov’s website, he sends 10% of his proceeds to various charities, but he is excited to be working with Rapaport and his tables. “I work with exotic woods all the time,” said Aronov. “But this was something that was used to serve so many people, and now I’m able to breathe in new life.”

“We thought the tables held sentimental value, after serving so many people all these years,” said Rapaport. “The tables actually even have a holy aspect to them, as the Talmud goes so far as to suggest that the table that feeds the poor is as divine as the altar of temple.” 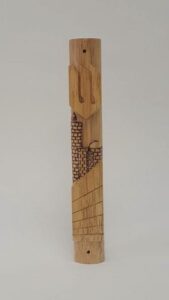 Mezuzahs made from Masbia’s old tables

These mezuzahs will be placed onto Masbia’s website for donors who wish to donate and get a ‘Masbia memorabilia’ as a thank you from the soup kitchen. Rapaport makes a strong distinction between a store and Masbia’s donation section. “If you give a donation, we give a little gift. It’s not really a store.” These mezuzahs hold the honor of being the first time Masbia has remade their own tables and given them away to donors, and will be offered at the hefty price of $3,600. Still, Rapaport sees the price worth the merit of giving to Masbia, noting that “this has Torah-flavored sentimental value. This is repurposed with a real purpose.”

According to their website, these tables have fed 2 million meals a year: “Over the past six years since its opening, Masbia has served over a million meals, which means thousands of people (many of them children and elderly).” At their tables, they wait on their guests and attempt to create a (free) restaurant atmosphere for anyone who wants a meal.

“What we are offering is like a mezuzah on steroids,” says Rapaport. “Casing your mezuzah in wood used to serve millions of meals will provide people with extra protective powers, because as we like to think of it, the more good deeds you do, the more merits you shall have.”

A raffle for this Mezuzah will be drawn on July 18th 2022, to enter click here.