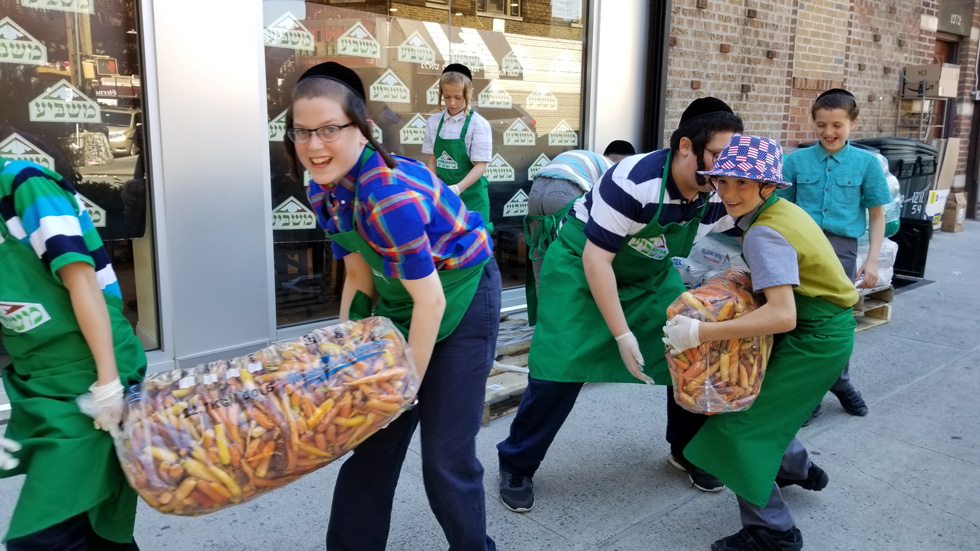 Sender Rapaport is a man whose every waking moment is steeped in chessed. Through his efforts, Masbia has served millions of meals to those who are hungry while filling his own inborn need to do chessed.

Masbia started out as a soup kitchen, with hot meals served to those who are hungry, not only for food but also for a kind word and a warm heart. Although today Masbia offers much more than just a hot meal, its essence is still the varmkeit that burns brightly at the core of every Masbia endeavor.

What inspired you to start Masbia?

I started Masbia together with Mordechai Mandelbaum to create a reliable place for people to get food. We realized that when you rely on every person doing their own chessed, many of those in need fall through the cracks. During the week, when it’s harder to invite guests with the hustle and bustle of everyday life and other obligations, having a guest for a meal is sometimes just too hard. We had the idea in 2004, and Masbia opened its door in Nisan of 2005.

Did you have any trouble getting started?

People were skeptical of the idea at first. Today we serve 2,000 hot meals from three different locations, one in Flatbush, one in Williamsburg and one in Boro Park. Each meal is served by volunteer waiters with dignity and respect in a restaurant-like setting. We serve the old and frail, the homeless, and people who are in a crisis situation with no means to cook for themselves.

Was chessed a focus to you when you were young?

The environment I grew up in was always about caring and making the world a better place, not in a big flashy way, but in smaller ways. We learned that we didn’t have to be the general, but rather the soldier who does the real work. From my parents and grandparents, I learned that chessed is about caring, more than about leadership.

My grandparents were not big machers. They were people who cared. They always had guests for Shabbos, as did my parents. Guests who
weren’t even distantly related to us but who would have stayed in shul and crashed on the bench there to sleep if they hadn’t been invited to the meal.

I remember, as a boy, wanting to bring my small chair to sit next to my Zeidy so I could pick up the Kiddush cup for him, and having to decide if I wanted it enough to sit next to a guest who hadn’t had the chance to shower for Shabbos and who might smell.

Did you involve your own children in Masbia?

When Masbia started doing Shabbos meals before COVID, I brought my kids, and we cooked and prepared, and then we made long meals with something for everyone. When it came to preparing a Shabbos meal, we prepared for every style and taste — every dip, every kind of lokshen kugel — whatever our guests considered Shabbos food we wanted to have, including nosh in case any children came. And my kids were always involved. They made sure the guests had everything.

We wanted to make our guests felt at home and made sure our Shabbos meals did not have a commercial feel. We sang zemiros, and I delivered a dvar Torah (more of a shmooze). I made sure to bentch the kids just like I would have done at home. We danced.

So every Shabbos your entire family spent at Masbia?

We would rotate with a few different families to host the guests.

How many guests did you have?

We had anywhere from 25 to 50 people. On some weeks when more local families were away, like Shabbos Nachamu, or were too overwhelmed to invite guests such as Shabbos HaGadol, or on Sukkos when there isn’t as much room for guests, then we
would have even more.

Did your children ever get tired of it?

They didn’t love every part of it, but it was a good experience. Sometimes, though, especially during the cold winter, having to shlep home a mile away wasn’t their favorite thing, but they loved coming on weekdays, straight from cheder. This one would start the cholent, the other would run for flowers or dips and challah. One would set the table. Everyone wanted to make it work.

And the stories shared after bentching from people in all different situations were inspirational. One Shabbos they heard a story from a chazzan who flew in every year from Eretz Yisrael to daven at the amud of a large shul for the Yamim Nora’im. He told about the bitter bidding war the shul had experienced the year before for pesicha. The man who lost out was terribly upset at the person who had outbid him. He bought pesicha every year and couldn’t believe this year he had lost it. What made it even worse for him was that he had two older sons who desperately needed a shidduch and he wanted the zechus of pesicha for them. It took hours after davening for the chazzan to convince the man to forgive. After all, if he had had pesicha for so many years, and it hadn’t worked for the two older sons until now, why not try something different and forgive? Finally, the embittered man agreed to be mevater. It was a year later, and the chazzan reported that both of the man’s sons were married.

These were the kinds of stories we heard around the Masbia Shabbos table that my children never got tired of hearing.

Are other children involved as well?

Yeshivos arrange visits where the kids can come and help us prepare. It’s a great educational experience. We distribute raw food boxes to last families for a week, so often a cheder will come and help. For instance, they can pack bags of apples or
potatoes from a huge bin to send out.

What do you feel Masbia’s place in the world is going forward? 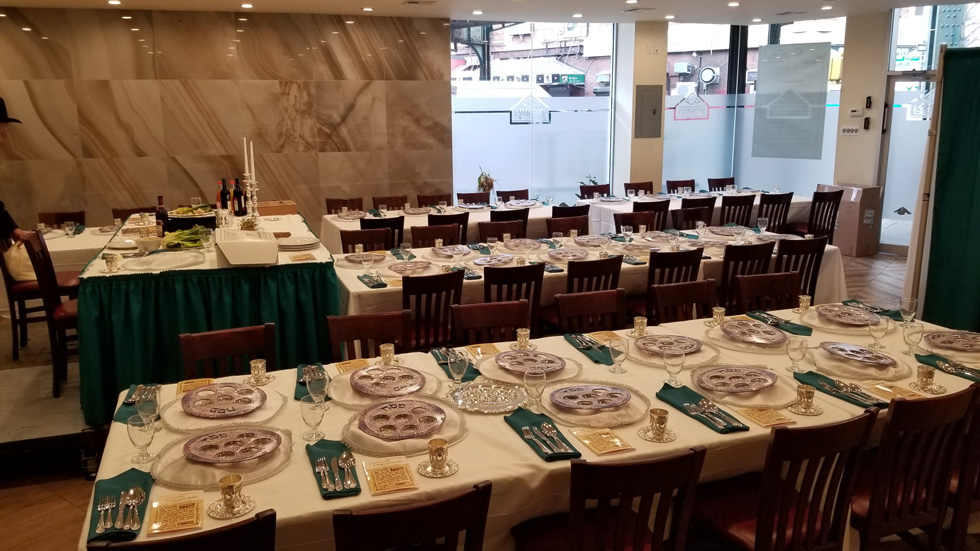 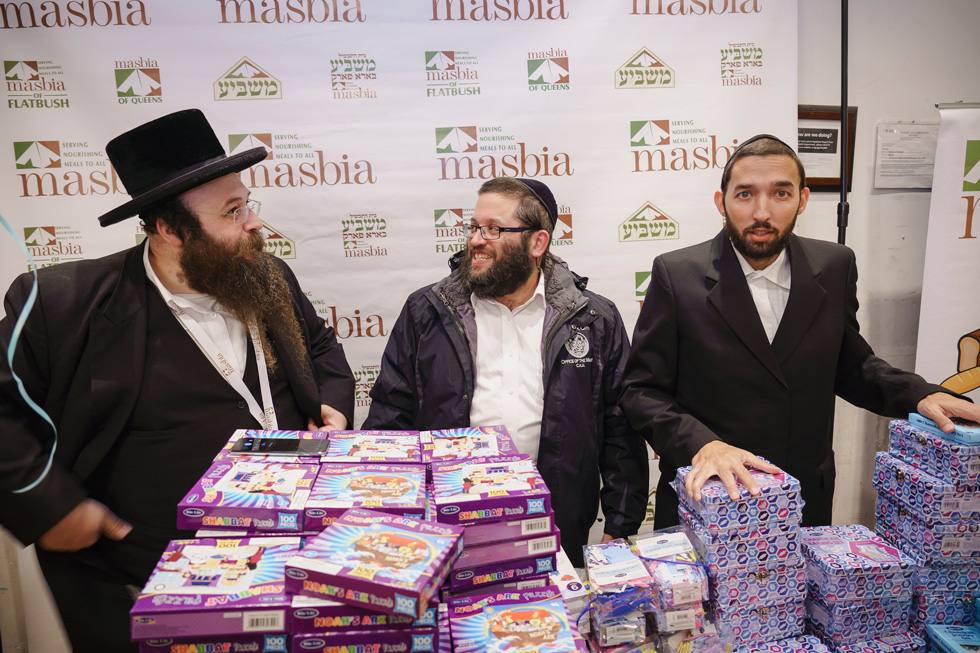 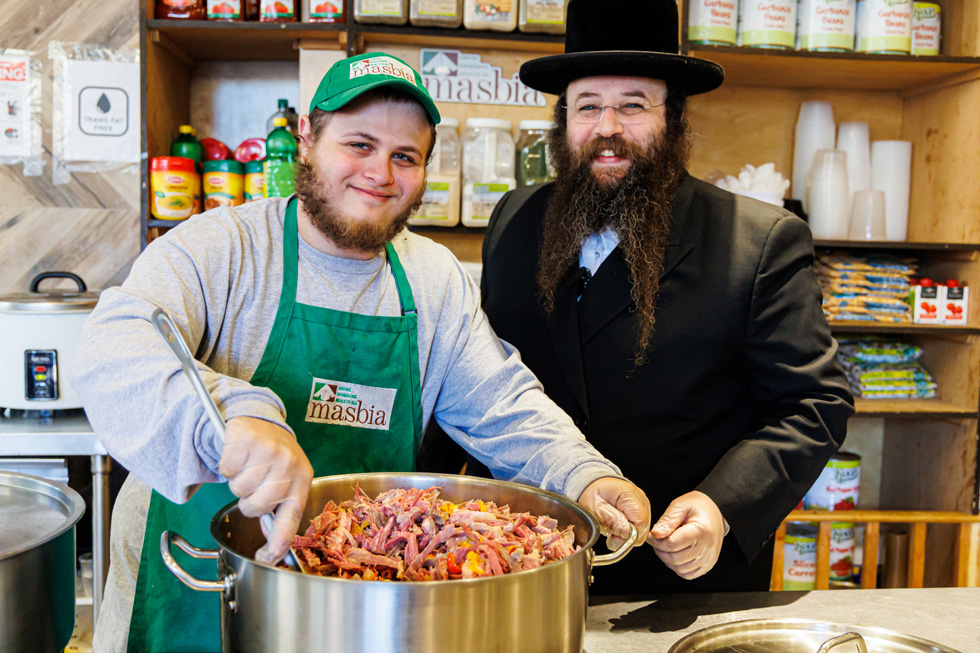 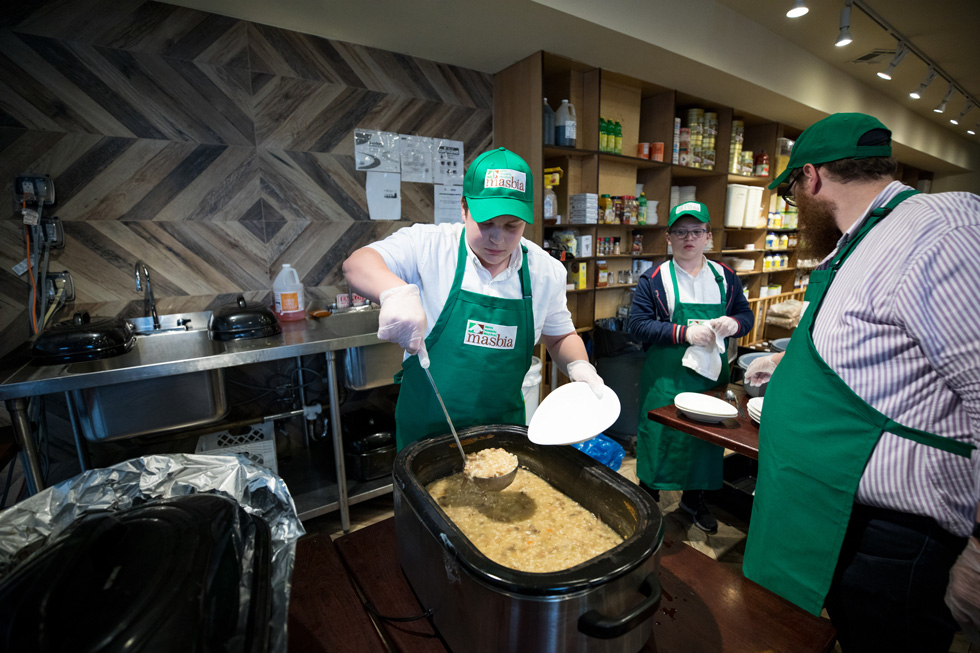 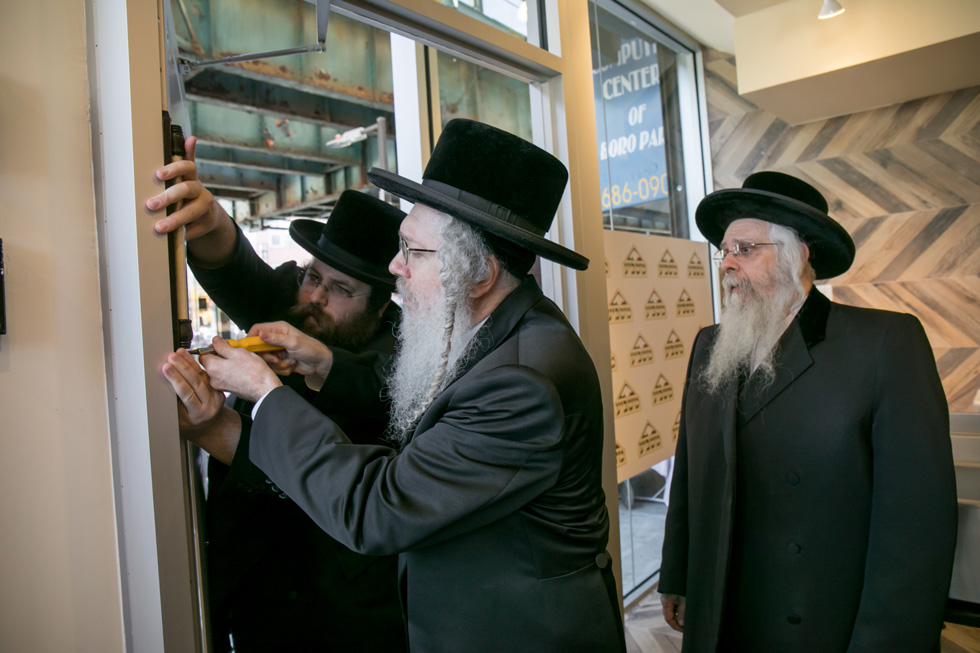 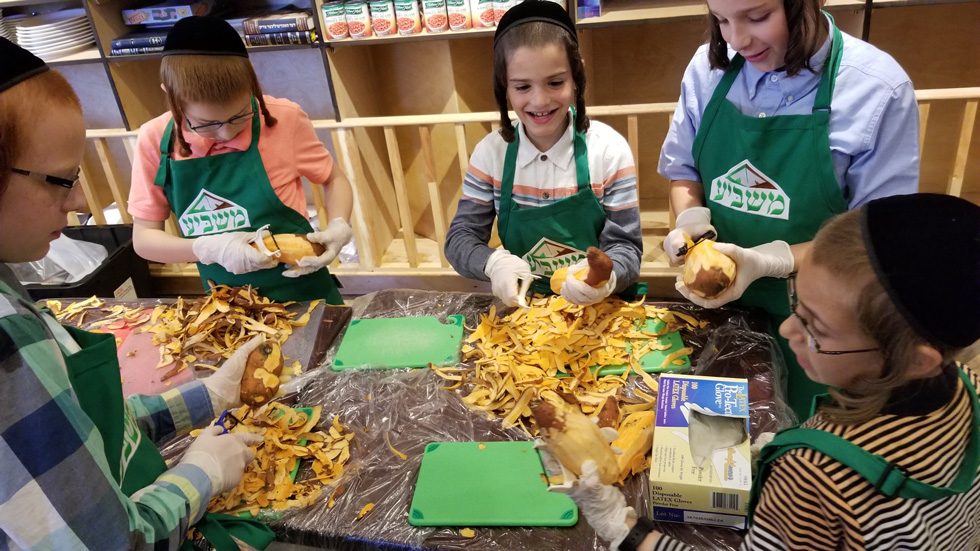