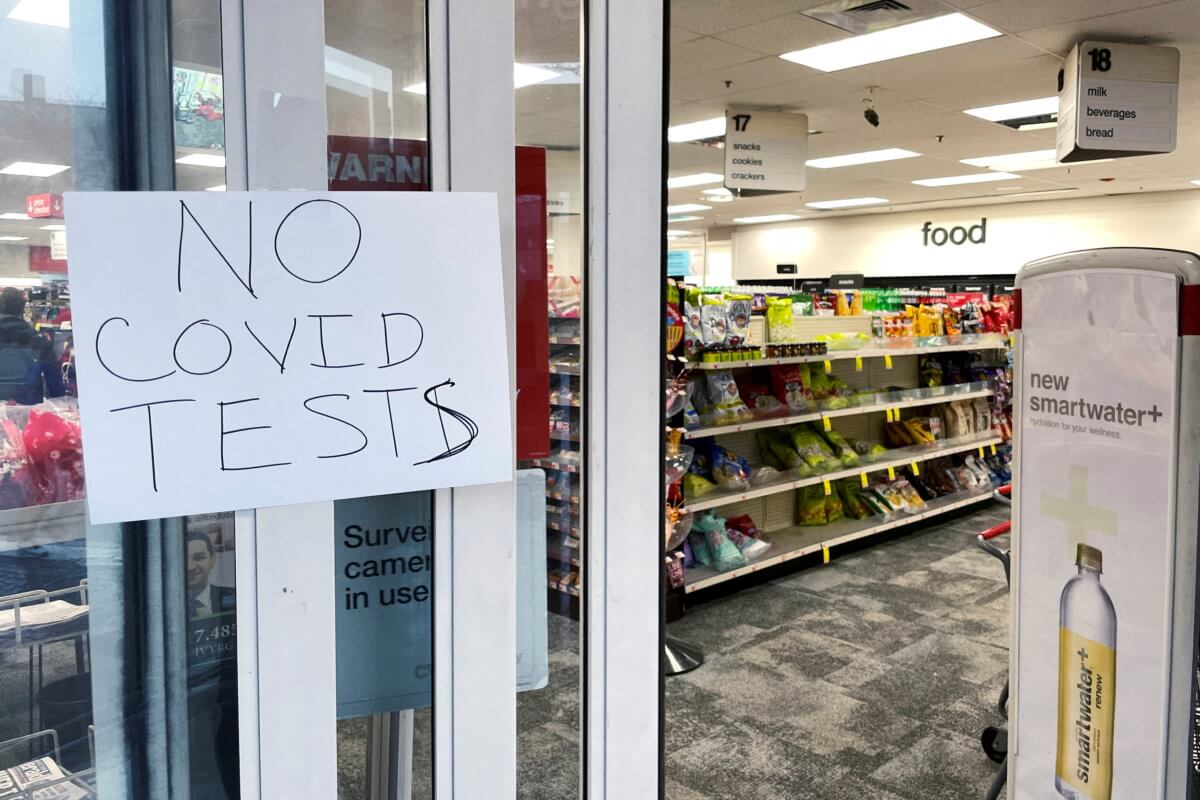 The city began distributing at-home COVID tests en masse on Thursday, and as expected, everyone in Brooklyn wants to get their hands on one.

Nearly a week after announcing the city would distribute half a million at-home tests, after which the state and federal governments made similar announcements, Mayor Bill de Blasio tweeted Wednesday night that 2,000 BinaxNOW two-pack rapid tests would be distributed for free starting at 9 am Thursday at the corner of 18th Avenue and 65th Street in Bensonhurst.

That morning, the Test and Trace Corps — the arm of the city’s public hospital network whose mission is spelled out in its name — set up a distribution station at that south Brooklyn corner, right by a CityMD which the ubiquitous minute clinic company, one of the city’s highest capacity COVID-testers, has temporarily closed due to staffing shortages. Test & Trace Corps workers donned in full protective garb carried a sack of tests and quickly handed them out to those on line. 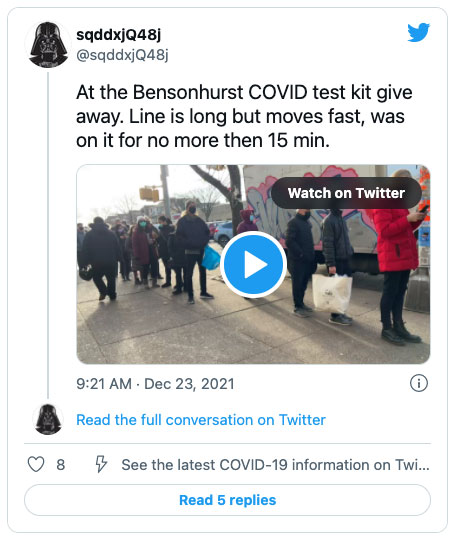 Lines were similarly gargantuan at distribution sites in the other four boroughs. 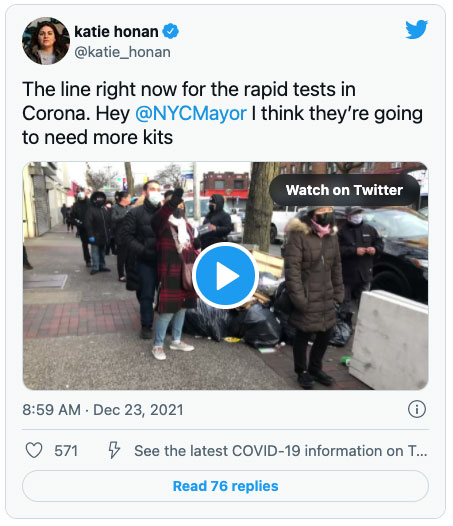 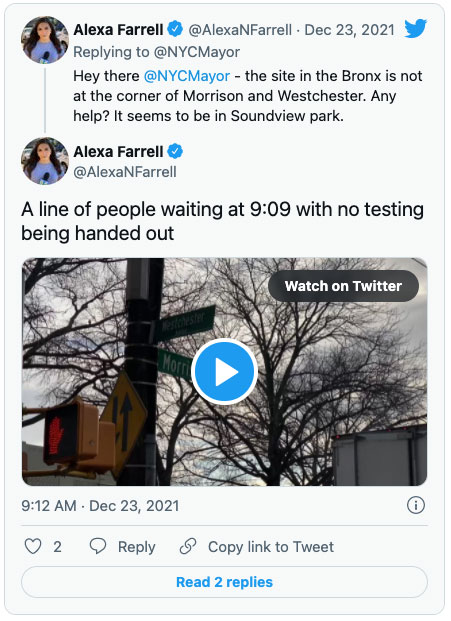 Distribution will continue on Friday, the mayor said, at a new location: the intersection of Flatbush and Church avenues in Flatbush, where the Test & Trace Corps will again mete out 2,000 Binax kits. 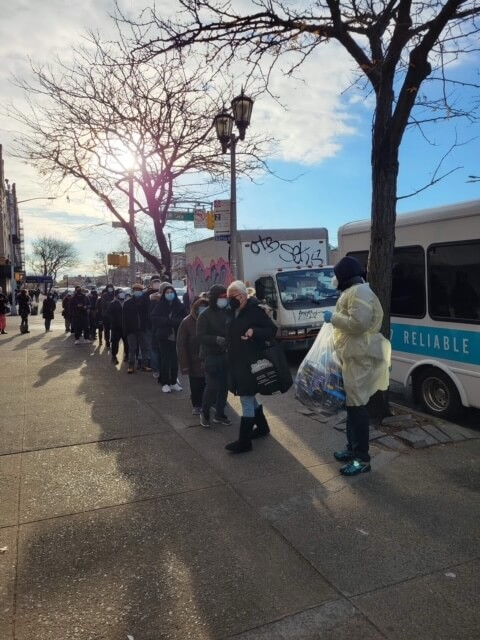 Partner nonprofits have also gotten their promised infusion of at-home tests, which are to be distributed at regularly-scheduled functions. Masbia, a kosher soup kitchen with locations in Flatbush, Borough Park, and Forest Hills, Queens, received a shipment of over 9,000 iHealth tests Wednesday night, 3,000 at each location, according to CEO Alex Rapaport, who noted that the haul should be enough to last about a week.

The group started distributing the tests Thursday morning, adding them on top of the allotment of food it distributed to low-income locals as part of the non-profit’s regular programming.

Rapaport said that the group was not expecting to get the shipment last night, but that the de Blasio administration contacted Masbia and told them they would make the delivery about a week earlier than expected to combat the ongoing surge related to the Omicron variant.

“It is fair to say that people who arrived today didn’t know that they’re getting this valuable prize together with their food,” Rapaport told Brooklyn Paper by phone.

Rapaport, however, cautioned against viewing Masbia’s distribution in the same lens as that of Test & Trace Corps; the test, he said, was a bonus of sorts for the low-income people suffering food insecurity that are already utilizing their services, rather than a general free-for-all. Allotments are available by appointment only, which can be made through the group’s app, though Rapaport acknowledges that the rapidly escalating nature of Omicron means they wouldn’t necessarily turn away walk-ins.

“Those who come for food will get the test as well,” Rapaport said. “Maybe people will now try to come for food because they just want a test, and that’s fine, but usually you would need to reserve a spot a good few hours or even a day before.”

The city again saw a record number of new cases on Wednesday, Dec. 22, with 22,808 new cases in New York City. That included 6,877 Brooklynites. The city has seen pandemic-era record numbers of new cases each day since Dec. 15, with the exception of Monday, Dec. 20, but new cases that day were the second-highest of all time after the previous day.

The citywide test positivity rate continues to climb as Omicron continues its rampage (Tuesday’s rate stands at 11.38 percent, per city data). The number of hospitalizations has increased, with 198 people admitted to city hospitals on Tuesday, 52 percent of whom tested positive, but those numbers still have not increased at anywhere near the rate of positive cases, which officials see as a good sign.

More good news is also coming out of South Africa, the country where the highly-transmissible Omicron was first identified: the outbreak there is subsiding just as rapidly as it came onto the scene, and data from that country suggests Omicron patients were substantially less likely to be hospitalized than patients with other variants, but researchers warn the data is inconclusive because of the South African population’s high level of prior infection.

Nonetheless, the outgoing mayor, whose term ends next Friday, has continued to project calm as the variant sweeps across the city, touting the stable number of hospitalizations and confidently positing that the outbreak will only last a few weeks.

“I want to be really clear with everyone: it’s going to be a tough few weeks,” Hizzoner said at an unrelated event in Park Slope Thursday. “But it will only be a few weeks. Omicron has come on real fast, but it will be over soon.”