Masbia In Hamodia: More Than A Big Apple Read the article below written by Reuvain Borchardt in the Straight Talk section in Hamodia. Hamodia speaks with Masbia chef RUBEN DIAZ shortly after he led a delegation of Masbia workers and volunteers marching in New York City’s Hometown Heroes Parade. The parade honored 14 categories of frontline COVID workers, including those who worked in emergency food operations. Masbia has food pantries and soup kitchens in Boro Park, Flatbush, and Forest Hills.

More Than A Big Apple

The first question I have to ask you is what was it like walking in a parade today for two hours in 90-degree temperatures?

It was worth it to see the faces of all the other people who were working for the last 16 months during the pandemic. It was nice to see all the brave people from all the different organiza-tions, programs and companies. And it felt good to see people appreciating what we have done.

Take us back to the beginning of the pandemic, when Masbia had to ramp up its food distribution.

I remember sitting in the Masbia office with Executive Director Alexander Rapaport when the coronavirus first hit and the economy started shutting down, and he said, “Ruben, the people are going to need a lot, a lot, of help.” People were losing jobs. The government was trying to help, but immigrants did not qualify for the federal stimulus payments.

We knew that the lines were going to belong.

And we also knew we would have to stop serving eat-in hot meals because it was unsafe to have people congregating. So we removed the tables and turned our locations into food pantries only. We continued providing ready-to-eat meals, but takeout only.

In the last 16 months, between our three locations, we’ve moved 20 million pounds of food.

Were you still cooking the takeout meals yourself?

It was impossible for us to cook all these meals. There was such a large demand, and we didn’t have enough volunteers to help take care of it. So we got the meals from other sources.

The airlines had mostly shut down, so we bought up all the kosher airline meals we could, both kosher for Passover and not kosher for Passover. Normally we only give one hot meal at a time, but we started letting families make meals for up to seven days, to minimize how many times they’d have to leave their homes during the pandemic.

We got lots of donations during this period; our donors really stepped up because it was a desperate time for so many people. We rent-ed container-sized freezers and refrigerators and rented forklifts to load them.

We were able to do a full Passover distribution, with all the expensive items for Passover, like matzah and chicken, etc.

At one point during the summer, instead of meals, we started giving vouchers for families to use at local takeout stores. In addition to helping the people, this helped these small businesses, which had been hurt badly by the shutdown.

Also, during the summer, the city had a “Grab & Go” meals program that included kosher meals. We collected all the leftover ones and distributed them at our locations.

That sounds like a lot of meals. Whatever you took in was ultimately used?

Our food pantries previously were open a few days a week. During the pandemic we were doing 24 hours a day, because of the need, and because we had to stag-ger appointments to avoid large crowds.

Yes, only about three or four weeks ago. We are still in the process of switching back. Since we had used the restaurant as a warehouse, there was lots of damage to the walls, and the facility took a beating. Using a restaurant as a warehouse causes a lot of damage. So we had to start repainting, fixing things up, and changing the tables. But now we’re back to serving hot meals in addition to our food pantry.

Now that you started doing hot meals again, are you back to being the chef? Or are you still dealing with the food pantry?

We now have three people who cook for Masbia. I supervise them. But I am still managing the pantry program.

Tell us about what this parade meant to you, and the other Masbia workers who marched in it.

It was a great feeling for me and the other workers. We marched for two hours, as you mentioned. But we actually had to check-in at the location more than two hours before that. So we were out in the heat for over four hours, but it was well worth it.

When I got the invitation from the city to march in the parade and bring some other Masbia workers and volunteers, I chose those who were with me from the beginning of the pandemic. It was a good way to say thanks. This is probably the only chance we’d get to ever be in a parade in New York. And seeing all the people saying thanks to us was really nice. It was good for the morale of the workers and volunteers, to realize that all their hard work during this difficult time was appreciated by the people of this city. 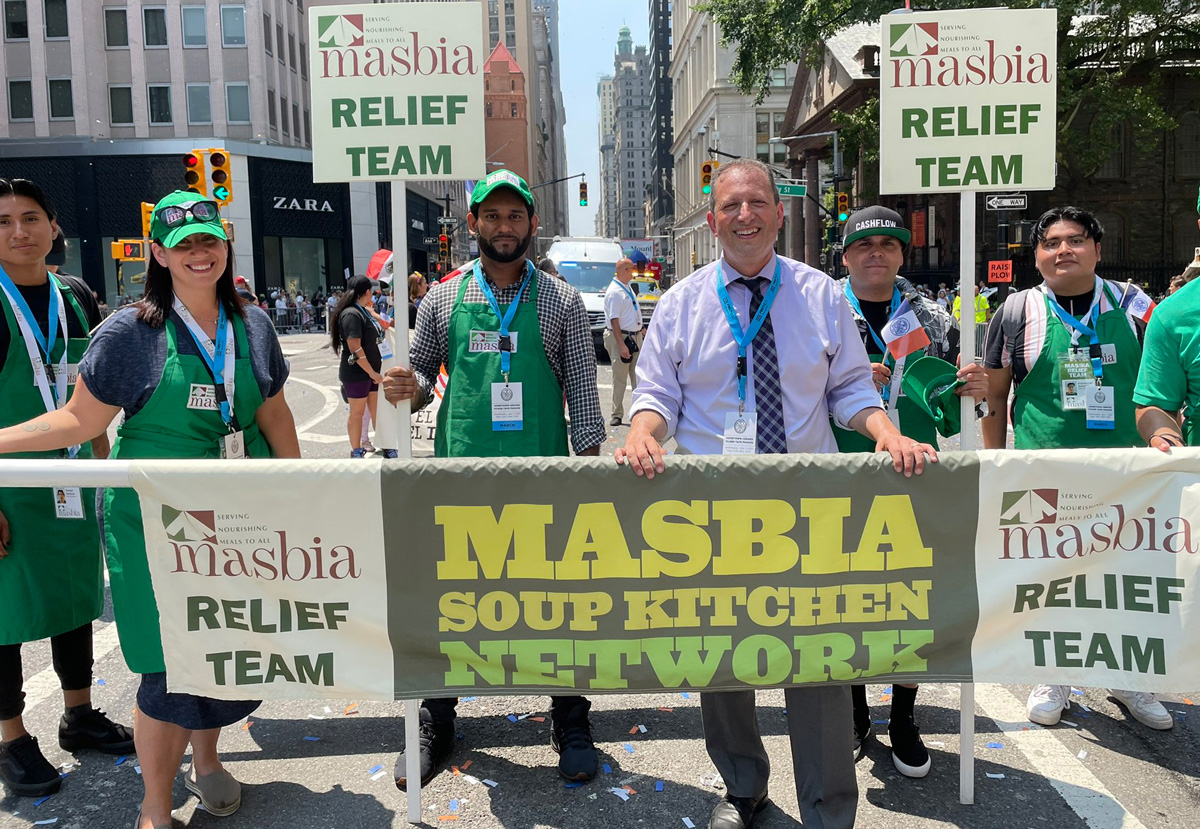 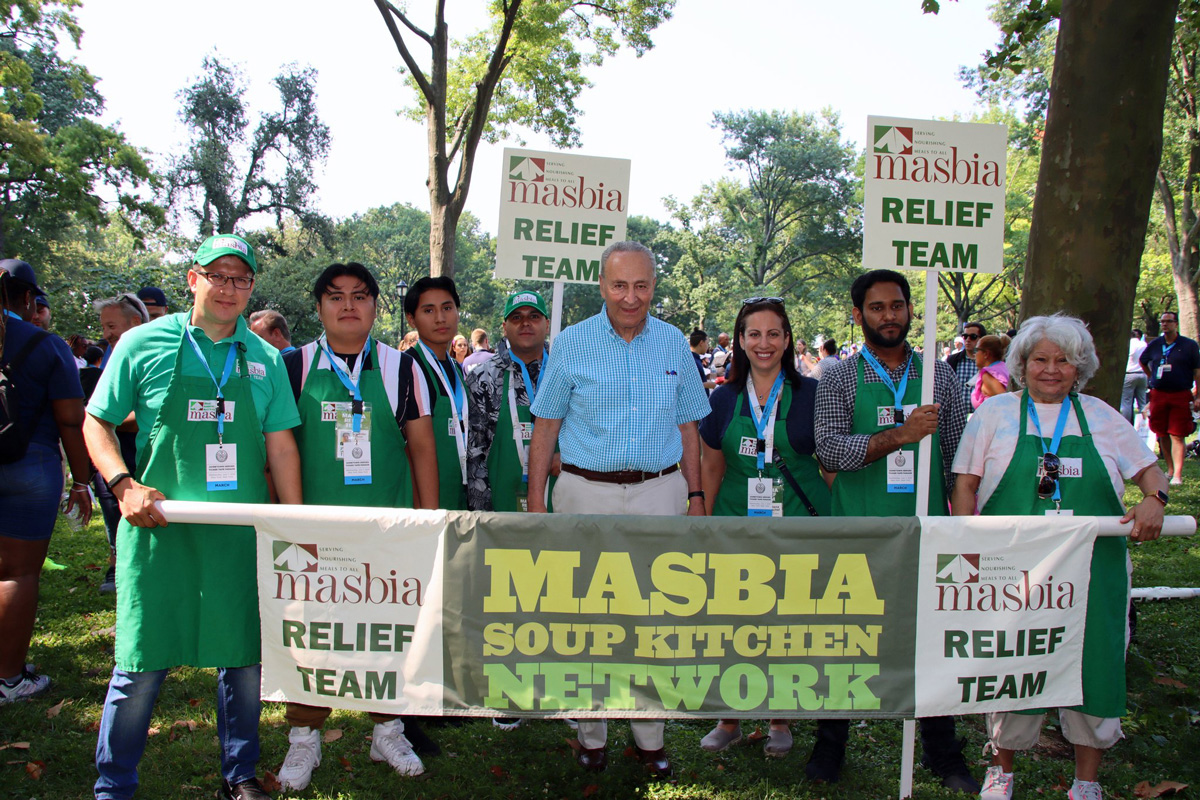 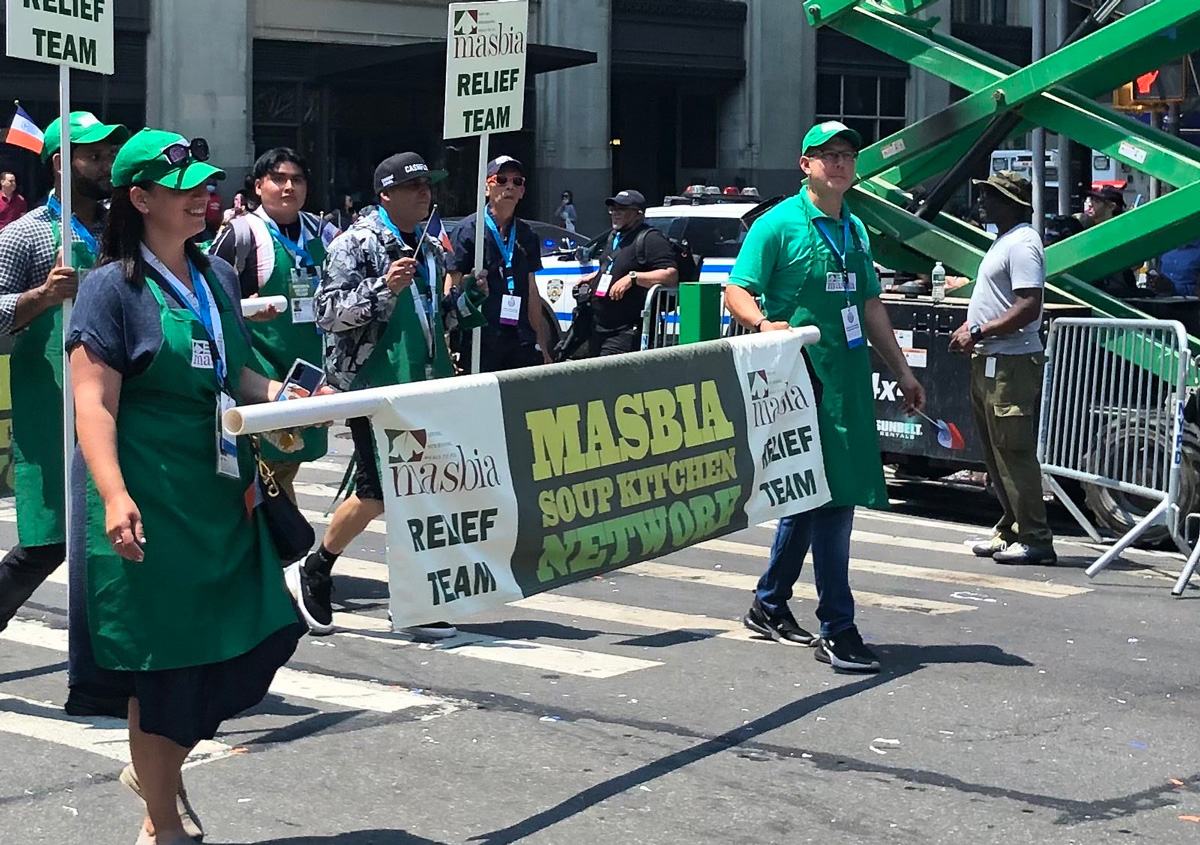