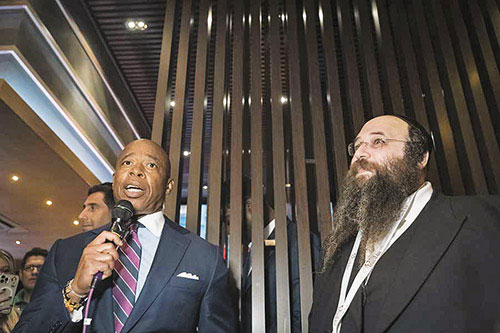 Every year, on the day before Kosherfest, the kosher food industry’s annual trade show, a small group of journalists, influencers and foodies from all over the kosher spectrum gather for the Jewish Food Media Conference. This year, the event was held at Sen Sakana, a kosher nikkei (Japanese-Peruvian fusion) restaurant in New York City.

A few different groups came together to host the event as Melinda Strauss, the event’s founder, was overseas at the time. Fleishigs magazine and Masbia, the network of kosher soup kitchens, stepped up to run the event in Strauss’s absence.

While the conference included some scheduled speakers, it took an interesting turn when a speaker who wasn’t scheduled came to the microphone. Eric Adams, the mayor of New York City, had decided to stop by and give the crowd a few minutes of his time.

“Food is powerful, and all of us define ourselves by our food,” Adams said, as he spoke to the crowd of kosher enthusiasts.

Adams went on to announce that he will once again be supporting an initiative called “Breaking Bread, Building Bonds,” which he started when he was serving as borough president of Brooklyn. That program featured 100 meals of 10 people each where the participants were from different cultures, religions and ethnic backgrounds.

The mayor wants to reinitiate the program citywide in the coming year and expand it to 1,000 dinners. “That is how we change the dynamic,” Adams said. “When we stop being afraid of each other and talk to each other. And food has the power to do so.”

Adams communicated that he hoped that this program would help fight antisemitism and other racial tensions in communities across New York City.

“If we share a meal together, we are more likely to share a city together,” he said.

Making the announcement may have been one reason for the mayor to stop by, but it was clear that the other was to support the initiatives of his long-time friend, Alexander Rapaport of Masbia.

Masbia has been working with Adams for years, most recently to help the city receive asylum seekers who are sent by bus from Texas to Port Authority in Manhattan. Masbia meets the migrants and tries to provide everything they need when they step off the buses.

Adams called Masbia a great organization that has responded whenever there were people in need.