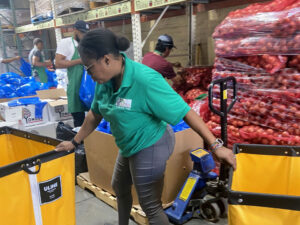 Six packages a minute was the pace at which groceries were leaving Masbia’s food depot on a Wednesday afternoon in September, bound for neighbors in need.

Rosh Hashanah was starting on Sunday and volunteers at Masbia, a network of kosher soup kitchens and food pantries, were racing against the clock, assembling large food packages for the festivities. The packages were strapped to the bikes of DoorDashers, who ferried them to residents in Borough Park and Flatbush. Masbia partnered with DoorDash’s Project Dash initiative in March to deliver groceries to families in the area, for which DoorDash covers all costs.

Rosh Hashanah, the Jewish New Year, marks the beginning of the High Holiday season. Yom Kippur and Sukkot quickly follow in the first weeks of October. But all these holidays can put additional stress on those who are self-employed — observant Jews are not allowed to work during this time, and schools close down for both Rosh Hashanah and Yom Kippur.

“If you’re a car service driver, a graphic artist, a plumber, an electrician, you get paid for the gig,” Alexander Rapaport, Masbia’s executive director, said. “If you have so many days off for four weeks in a row, you’re going to miss a lot of work.”

Laura Allen, who coordinates Masbia’s volunteers, agreed that demand for help from the organization has always been high during the High Holiday season. Allen attributed the increased need to the large family sizes in the neighborhood and religious school closures – parents who depend on schools to provide daily meals for their kids must suddenly scramble to make up the difference. 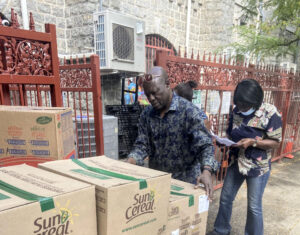 At Goke Food Pantry, which operates out of Kensington’s Christ Apostolic Church on Cortelyou Road, preparations were similarly underway for its upcoming Thanksgiving giveaway.

Thomas Adebiyi, who has been coordinating Goke Food Pantry since it opened in 2013, said that while demand for food assistance is high year-round, Thanksgiving presents a particularly costly challenge: the turkey.

Every year, Goke Food Pantry provides 1,000 turkeys to those in need. While he would like to give more to visitors for the food-centric holiday, Adebiyi focuses on putting funds where they’ll do the most good.

“Turkey is always the most expensive thing on the Thanksgiving table,” he said.

This year, Adebiyi says, the price for a thousand turkeys has shot up from $12,000 to $22,000, almost doubling what it will take to fund the giveaway.

Masbia and Goke Food Pantry were established in response to community hunger, and both Covid and inflation have intensified food insecurity. Food prices were up over 10% in New York and New Jersey in August compared to last year, the U.S. Bureau of Labor Statistics reports.

In Community District 12, which includes Hasidic Borough Park, Kensington, and Ocean Parkway, hunger and economic hardship are common. Nearly one in four residents live below the poverty line, according to the 2020 Census, much higher than the 14% city average. A third of residents in the area are under 18, and many of those who go hungry are children. 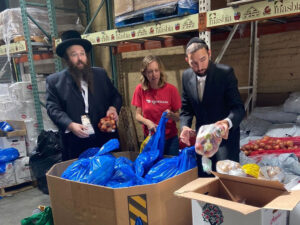 Rapaport co-founded Masbia in 2005 and credits his family with instilling a desire to share with those in need, a central tenet of Judaism. That desire to help those in need eclipses all other concerns – even how the organization will manage to make rent from month to month.

“My staff hates me for it,” Rapaport said. “It’s challenging because we need to make payroll constantly, but it’s also got that thrill. We put money into action. Every dollar donated to Masbia is in someone’s stomach before two weeks.”

Simi Ganzfried, Masbia’s office manager of 16 years, echoed this unwavering commitment to feeding people in need by any means necessary.

“We will serve the people no matter what. I will not get paid, but we will buy food to feed the people,” she said. “We make sure people are always fed, even if the bank account is zero.” 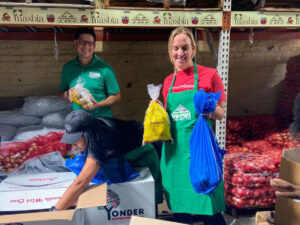 Ganzfried credits DoorDash with providing the logistical infrastructure for delivery, allowing Masbia to serve heightened demand – in the six months that Masbia has offered delivery, 1,700 people have signed up in Borough Park alone.

Goke Food Pantry started small, Adebiyi says, but also grew quickly in response to the need for food in their community – the pantry now serves 12,000-15,000 people each month. While Adebiyi admits providing for so many is overwhelming, he ultimately finds being able to help very rewarding.

“People will tell you how they’ve not eaten anything or had anything all day. But when they come here, they have food to eat, and they feel satisfied.”