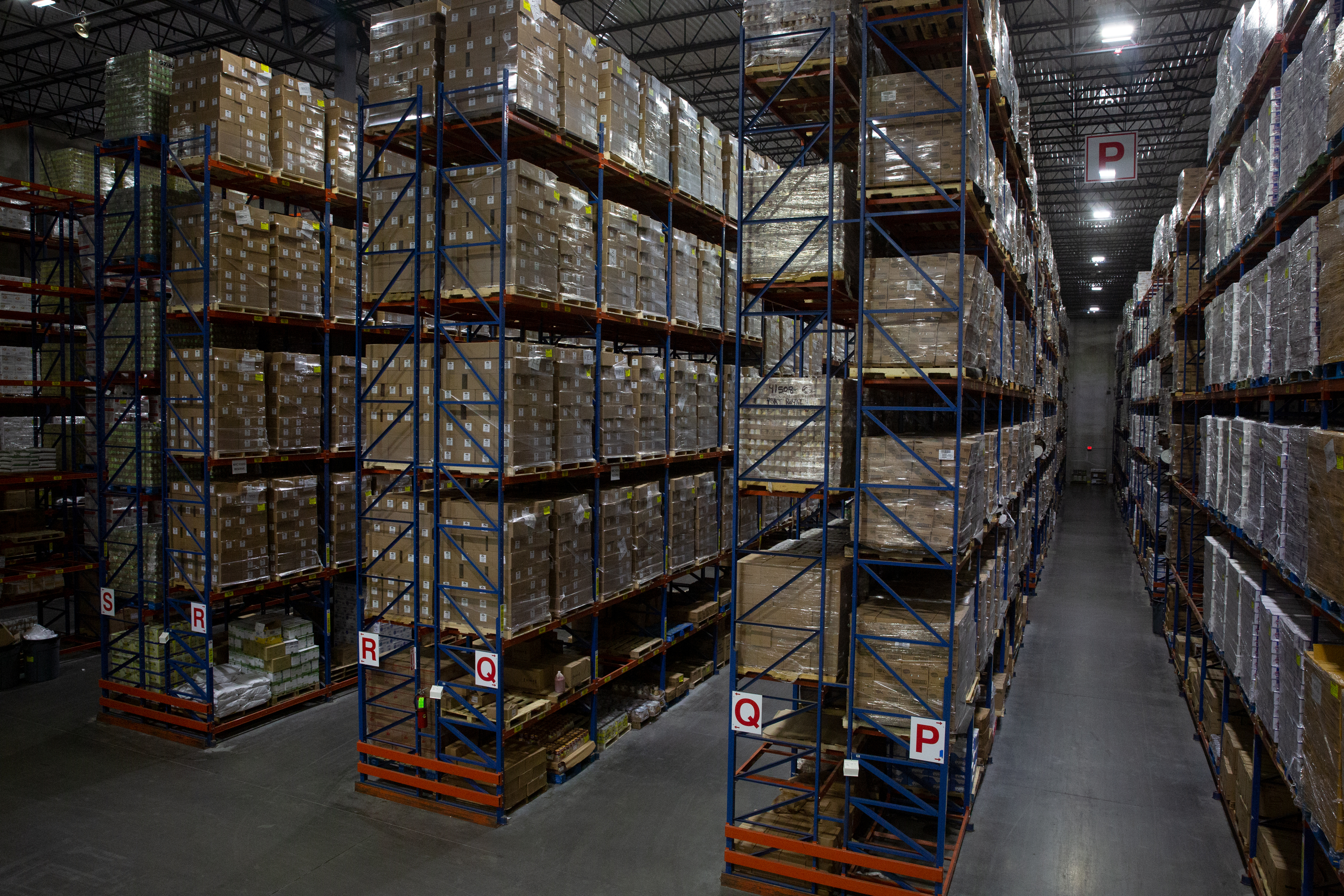 Read the article below written by Yoav Gonen, in The City, on plans of emergency food stockpile for the city. On Monday, 3600 cases containing fresh vegetables are scheduled to be delivered to Masbia Soup Kitchen Network in Queens and Brooklyn to help New Yorkers due to the Covid-19 pandemic.

A New Jersey warehouse, set up as a supply reserve during the height of the coronavirus crisis, is distributing items to food pantries in the city. The first deliveries go out Monday.

Mayor Bill de Blasio made the announcement in April during the height of the pandemic: plans for an emergency food stockpile for the city, to be amassed in a football field-sized section of a colossal warehouse in Wayne, N.J., about 20 miles from Midtown.

Now the warehouse, containing the makings of six million meals for hungry New Yorkers, is about to begin a new life as a food-aid distribution hub, with the first deliveries set to go out Monday to pantries in Brooklyn and Queens.

THE CITY got a look at the inner workings of the operation, which has turned from a food supply-disruption backup plan to a way to serve the ongoing needs of hundreds of thousands in a growing pandemic-driven humanitarian crisis. 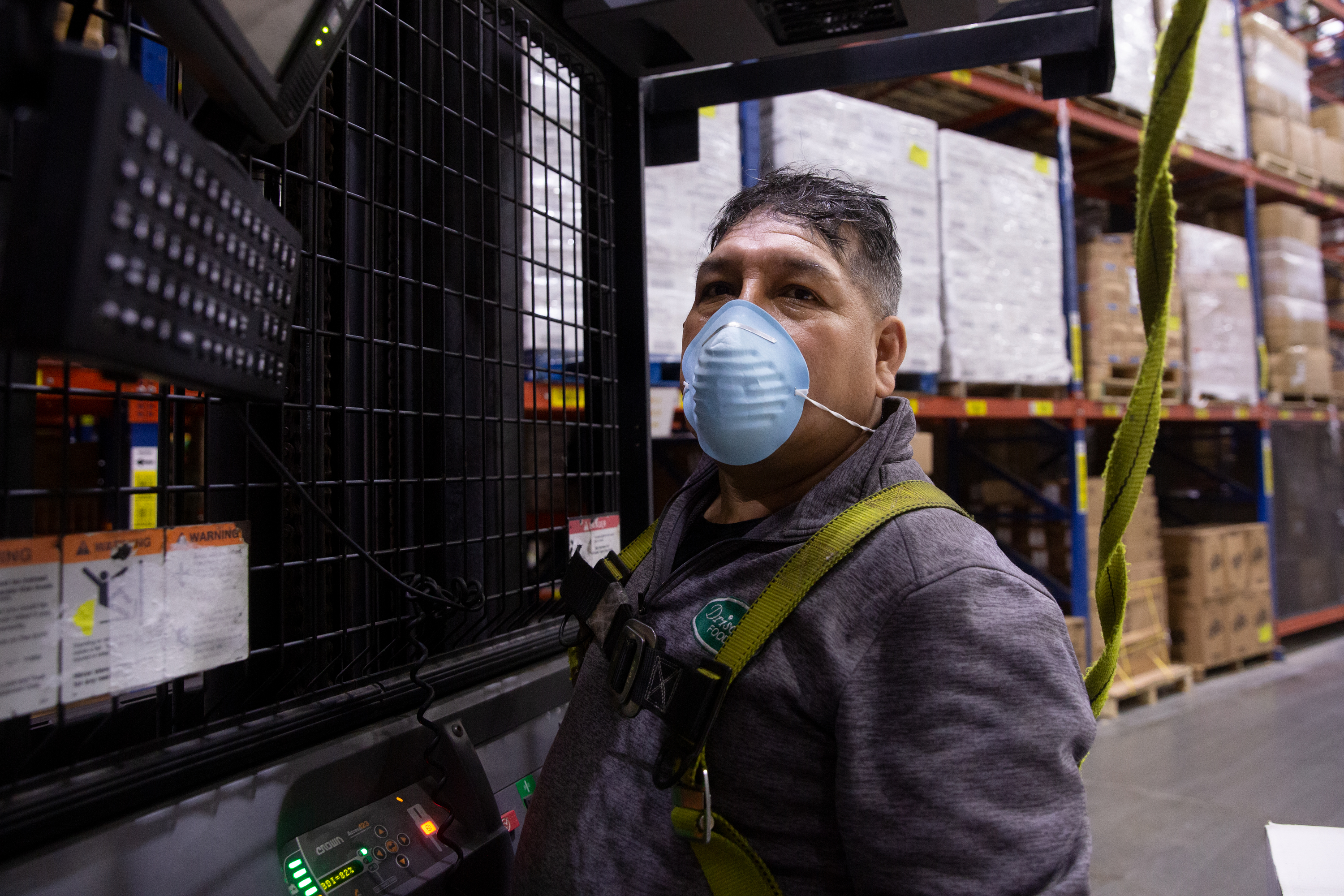 On the refrigerated side of the warehouse operated by Driscoll Food distributors, an additional 3,600 cases containing carrots, green peppers, celery, and other fresh produce are earmarked for New York City. Overall, the city’s food reserves take up about one-sixth of the sprawling warehouse.

On Monday, as part of a revised mission away from an emergency stockpile, those 3,600 cases are scheduled to be delivered to three sites of the Masbia soup kitchen network in Brooklyn and Queens — the first time items are being distributed to New Yorkers under the emergency food initiative announced in April. 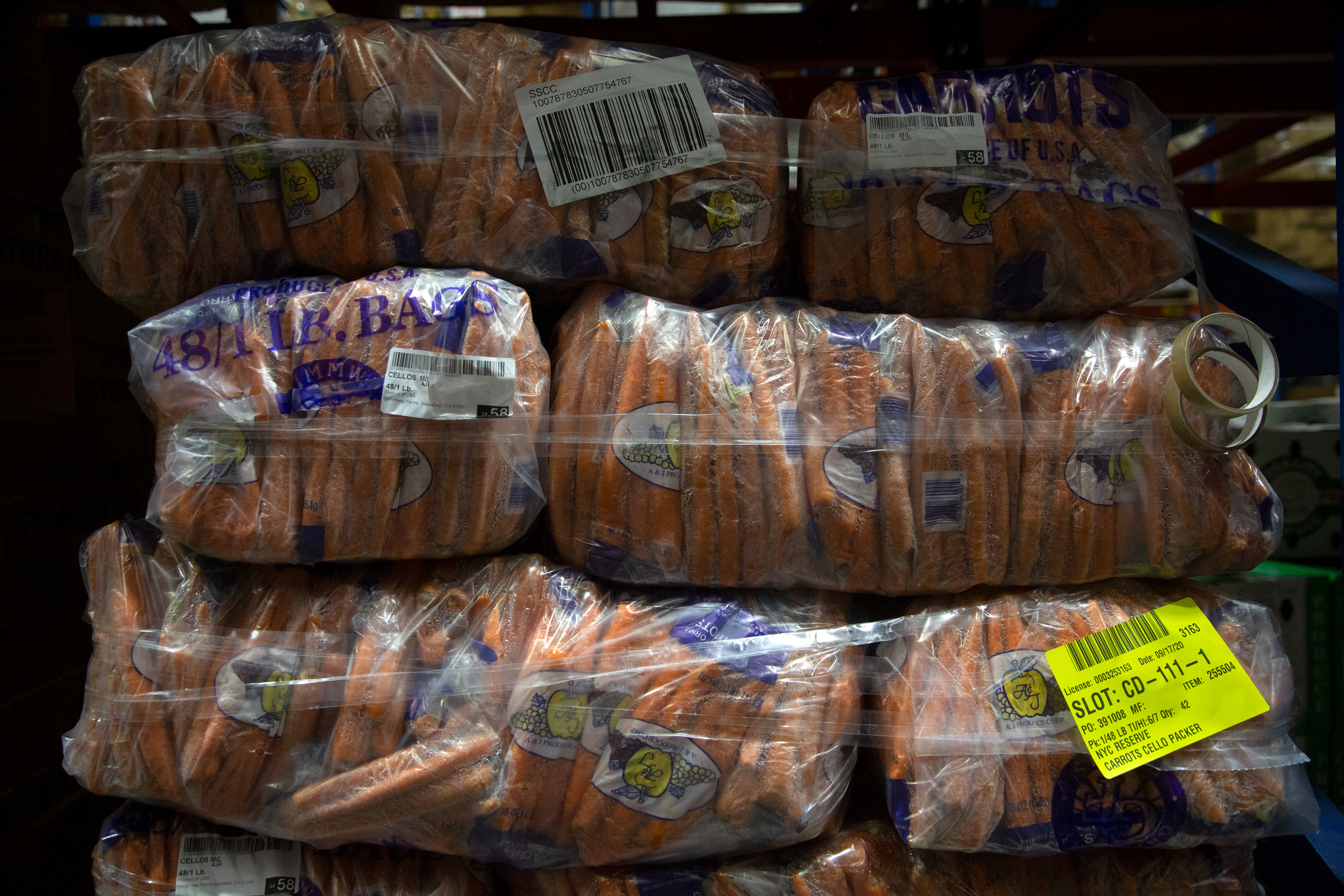 Rapaport said his group’s three sites — in Borough Park and Midwood in Brooklyn, and in Rego Park, Queens — have seen a fivefold increase in distribution, collectively serving 12 to 15 truckloads of food per week, rather than two to three pre-pandemic.

While the food distributed by Masbia is kosher, the recipients come from a wide variety of neighborhoods and immigrant communities, according to Rapaport.

“There’s always new faces,” he said. “There are people who came to us who said now that their benefits stopped, they’re feeling it for the first time.”

This included organizing food deliveries to the elderly and the homebound, distributing millions of “grab and go” meals at schools across the city, and creating a $50 million food reserve to protect the city from potential disruptions to the region’s food distribution system.

“This means we’ll have a failsafe, we’ll have a reserve that’s just for New York City to protect us no matter what else happens,” de Blasio announced at the time. “Even a small disruption in the food supply would have a huge negative effect on New Yorkers. We won’t let that happen.” 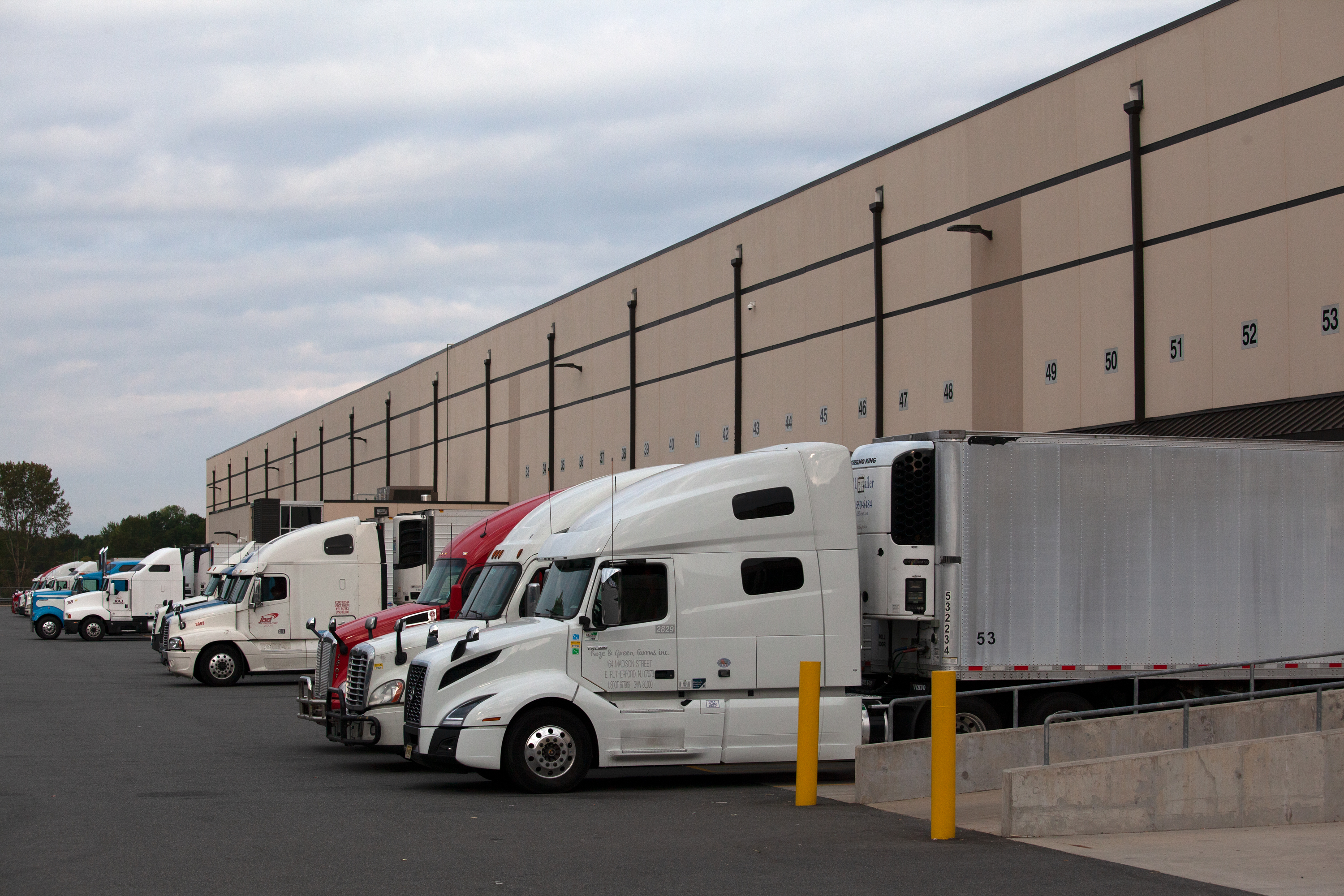 The original plan called for the components of 18 million shelf-stable meals to be stockpiled for emergency use — a target that the Driscoll Foods warehouse expects to meet in late October.

But instead of a stockpile, the warehouse is being retooled as a Costco-like distribution hub from which 800 of the city’s food pantries and soup kitchens can submit orders for items at no charge. And fresh produce is now part of the picture.

City officials said the mission has shifted because of an immediate need at the pantries, and because fears of widespread food disruption have eased since the height of the coronavirus crisis.

“In April, we were really preparing for the worst — for major disruptions to the supply chain of food into the city that thankfully have not occurred,” said Joshua Goodman, a Department of Sanitation spokesperson.

“Instead, we are hearing from pantries that there is a continued need for fresh produce and other products,” he added. “This program, the Pandemic Food Reserve Emergency Distribution (P-FRED), is going to help meet that need, and give pantries the freedom to choose the products their communities need.”

Garcia recently stepped down as food czar and sanitation commissioner, ahead of a potential run for mayor.

Joel Berg, CEO of Hunger Free America, said it makes sense to distribute rather than store the elements of millions of meals because of the scale of the immediate need.

By late April, more than one-third of the city’s food pantries and soup kitchens had shuttered because of the coronavirus, Gothamist reported, as volunteers became scarce. 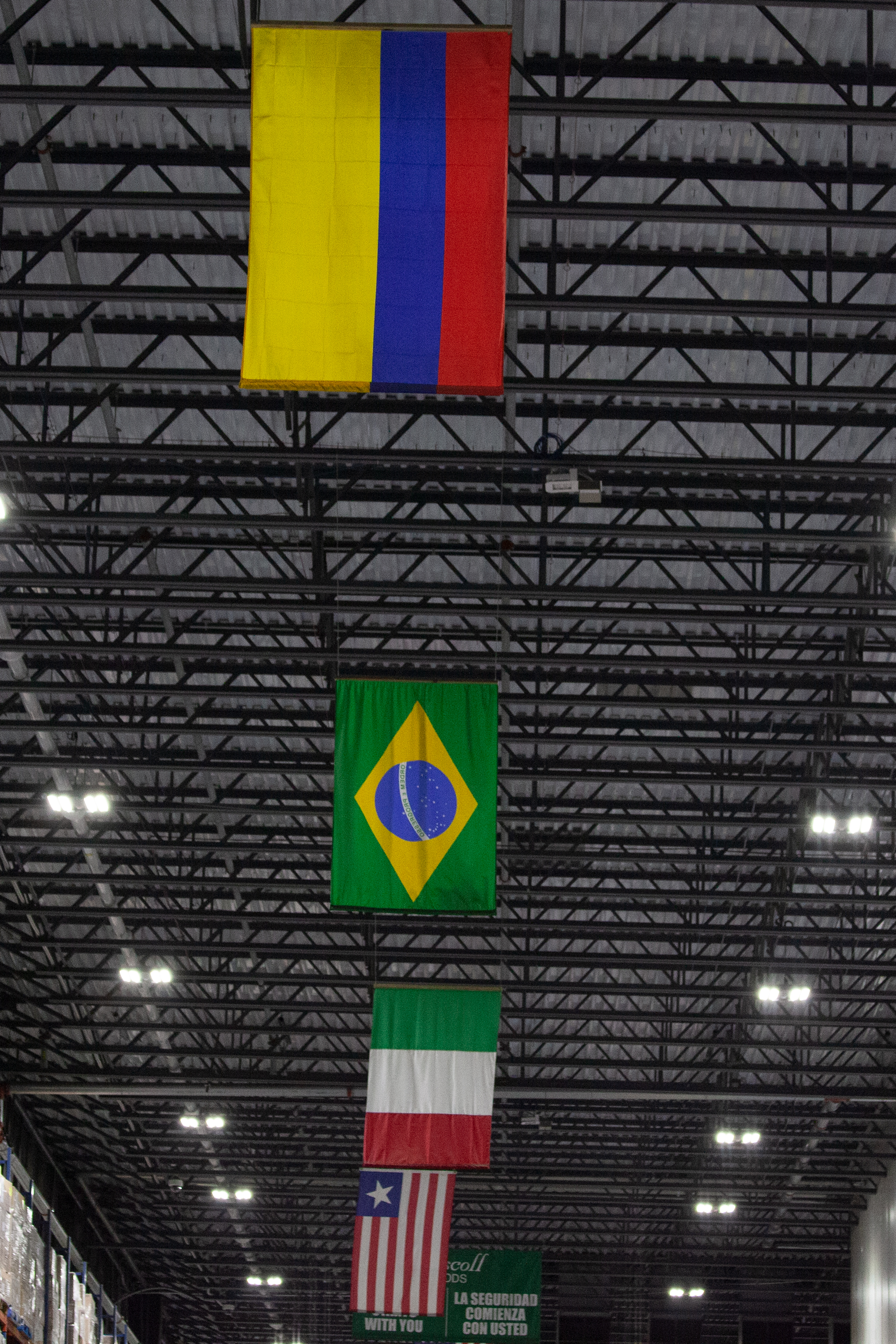 In April and May, the state and the city, with the urging of City Council, each dedicated $25 million to bolster area food programs — particularly the overwhelmed pantries.

Berg noted that the $50 million food reserve is a “drop in the bucket” compared to the need and relative to other emergency food programs.

City officials have said that the number of food-insecure New Yorkers has climbed to more than two million people — up from about 1.2 million before the crisis began in March.

“It very much is needed now,” Berg said of the distribution of food from the reserve.

Long-Term Needs
According to the city’s deal with Driscoll Foods, the food reserve is slated to be depleted by June 30, 2021, unless the one-year contract is extended.

The terms require 20% of the 18 million meals to be comprised of fresh produce. Some 1.5% of the meals required to be kosher, and another 1.5% must be halal.

The maximum cost for the one-year deal is $48.5 million, the contract says. 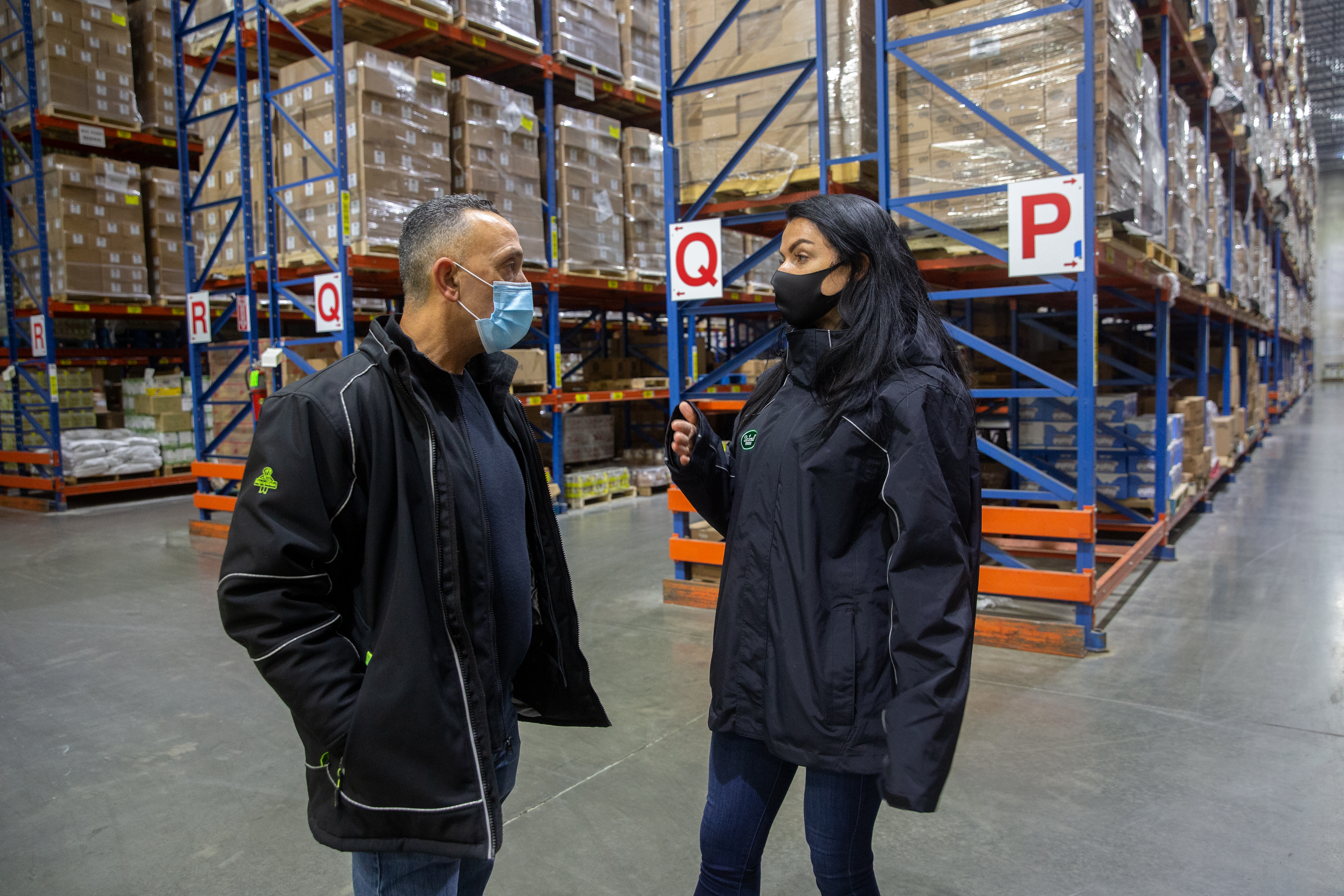 Staff at the warehouse said they’ve seen a dramatic change in their customer base due to the coronavirus crisis.

“Our business shifted so much from bars, restaurants and country clubs… [to] the pantries and the funded agencies,” said Sara Kenyon, vice president of operations for Driscoll Foods.

On Monday, the City Council’s General Welfare Committee is slated to hold a hearing on the city’s five-month-old response to the growing hunger crisis.

Committee Chair Stephen Levin (D-Brooklyn) said members want to ensure that the city is doing all it can, given long-term needs.

“The emergency food system has been turned totally upside down with COVID, and there’s going to be an emergency food need for a long time coming out of this because of the economic impact,” he said.