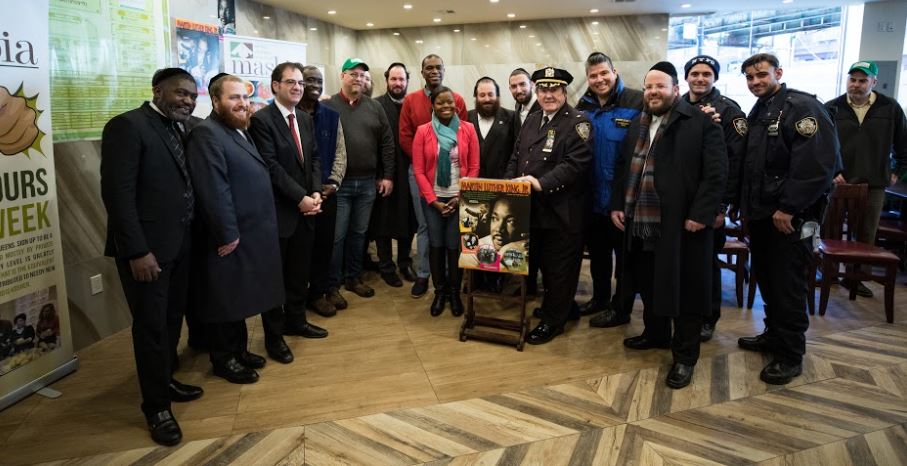 Read the article below written by Daniel Marans, published in the HuffPost, on the meeting to bring unity to our communities after several attacks against Hasidic and other minorities. Our ED Alexander Rapaport convoked the Martin Luther King Day gathering at Masbia of Boro Park; among the attendance were: New York Assemblyman Simcha Eichenstein; Jersey City Councilwoman Denise Ridley;  Pastor Gil Monrose;  and Jonah Boyarin from the NYCCHR.

NEW YORK ― Hasidic Jewish, Black, and Latino elected officials, clergy, and community activists gathered on Monday for a day of service to express their shared vigilance against anti-Semitism and other forms of hatred, invoking the humanistic message of Martin Luther King Jr.

Alex Rapaport, the founder of Masbia, a kosher soup kitchen and food pantry in the Brooklyn neighborhood of Borough Park, convened the Martin Luther King Day gathering. Participants helped restock Masbia’s shelves and promoted a charity drive for survivors of the earthquake in Puerto Rico. 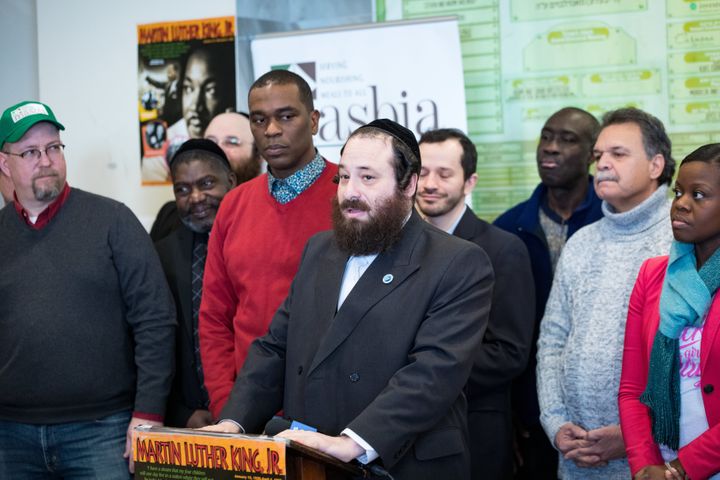 The event was designed to demonstrate inter-communal dialogue and solidarity following a wave of attacks against Hasidic Jews in the metropolitan New York City area. The violence, which for months was limited to verbal and physical assaults, culminated in December with a deadly shooting targeting the small Hasidic community in Jersey City and a gruesome stabbing in the Rockland County suburb of Monsey.

The vast majority of the attacks, including the shooting and stabbing in December, have allegedly been perpetrated by residents of low-income, predominantly Black neighborhoods adjacent to Hasidic enclaves.

As a result, participants in Monday’s MLK Day event were keen to emphasize positive bonds between the Black and Jewish communities and downplay divisions.

“We are bound to the Jewish people by our past. We are bound by our present. And we are also bound by our future,” said Monrose, a Black immigrant from the Virgin Islands who ministers to a Christian congregation in Brooklyn’s East Flatbush neighborhood. “We are standing together in solidarity with our Jewish brothers and sisters. We are standing together because we are one.”

Several speakers cited King’s broad legacy of love for fellow human beings regardless of their backgrounds and commitment to combating intolerance and persecution of minorities of all kinds.

Assemblyman Ortiz, who recently returned from an aid trip to his home island of Puerto Rico, thanked Rapaport for his work organizing a charity drive for the U.S. territory. That kind of assistance is in the spirit of King, Ortiz said.

“It doesn’t matter ... where we come from, what we look like, how we speak, what have you ― we are humankind,” Ortiz said. “And that is what Martin Luther King was trying to say.”

Chesky Deutsch, a leader of the Hasidic community in Jersey City, criticized news coverage for trying to create a narrative that pits African Americans against Jews. He noted that in his Hasidic enclave in Jersey City, his wife relies on their Black neighbors to keep an eye on their kids.

Rapaport interjected to affirm: “We look out for each other!”

As much as the event signaled a moment of healing and reconciliation after a violent December, some challenges lie ahead.

Assemblyman Eichenstein, who has called for more state and city resources to beef up security in Hasidic neighborhoods like Borough Park, is eager to see what New York Gov. Andrew Cuomo (D) allots in additional funds to protect institutions vulnerable to hate crimes when he announces his budget proposal on Tuesday. Eichenstein thanked the governor for $45 million in state funds to protect such institutions, which was allotted in the budget passed last year, prior to the wave of attacks. But he wants additional resources for vulnerable institutions, including schools and houses of worship, in light of the recent anti-Semitic hate crimes.

And though Deutsch, the Jersey City Hasidic leader, sounded a harmonious note, a dispute transpired in the weeks after the attack over an anti-Semitic Facebook message posted by Jersey City Board of Education member Joan Terrell-Paige. Terrell-Paige, who is Black, called Jews “brutes” in a since-deleted Facebook message, and suggested that observers should analyze the “message” of the assault on the kosher supermarket.

Although Jersey City Mayor Steve Fulop (D), who is Jewish, and New Jersey Gov. Phil Murphy (D), immediately demanded Terrell-Paige’s resignation, she has defied the calls with help from supportive members of her Jersey City community. Those community members argue that Terrell-Paige’s comments were a response to complaints about unscrupulous real estate speculators, some of whom are allegedly Jewish, and to concerns that the city is more responsive to Hasidic Jews than to African Americans.

Deutsch has decided that doubling down on calls for Terrell-Paige’s resignation would be counterproductive.

“I really don’t feel that it’s my place to come into something like that. I don’t know anything about that woman,” the Hasidic leader said. “I do see that she’s well respected in the community. And I’ve talked to numerous people who told me that she’s a really good person that may be expressed herself wrong. But my focus is on talking to people that would like to communicate.”

City Councilwoman Ridley, who is Black, also said it was better to move forward with efforts to educate people like Terrell-Paige, rather than seek to force her resignation.

“[Former President Barack] Obama said it best: We have this culture now called cancel culture, and people making a mistake and we kind of discredit anything they’ve said in the past,” Ridley said.

Referring to Terrell-Paige’s anti-Semitic comments and other prejudiced speech, Ridley added, “I definitely think there needs to be sensitivity training to understand that these things can’t happen that way.”

Ridley represents some of the estimated 75-100 Hasidic families who have moved into the Greenville section of Jersey City, which is predominantly African American. She has already made plans to convene an interfaith clergy meeting with the goal of increasing understanding between Black residents and Hasidic Jews.

Ridley has met at least one Jersey City woman who recounted her confusion when Hasidic children did not respond to her kids in recreational settings. The woman did not realize that Yiddish is the native tongue of many members of the Hasidic community, which may be the reason for the children’s reticence, according to Ridley.

Ultimately, Ridley believes that the two communities’ shared quest for economic security is the best basis for mutual understanding.

“We have the same needs: We want affordable housing, we want safe streets, and we have to join together on those things,” she said.

See below more photos of MLK Day at Masbia of Boro Park in Brooklyn: 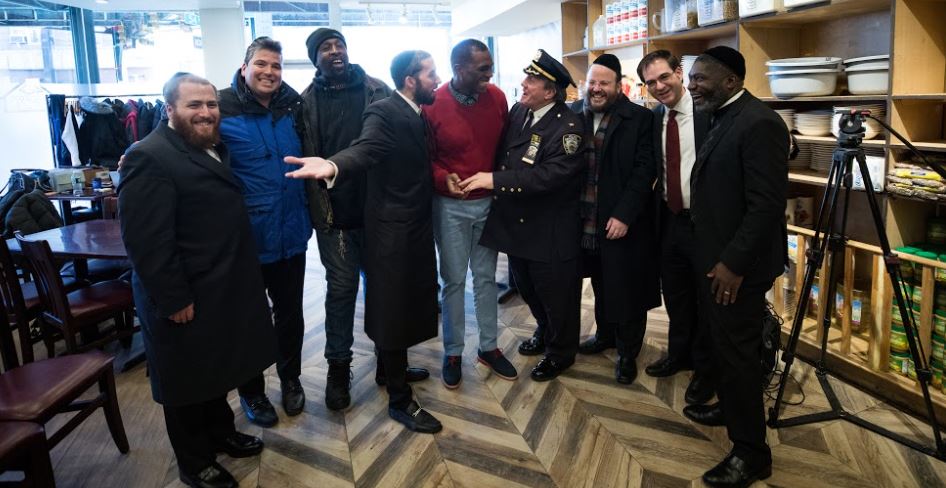