Masbia In The Jewish Link: A Show Of Appreciation For The National Guard 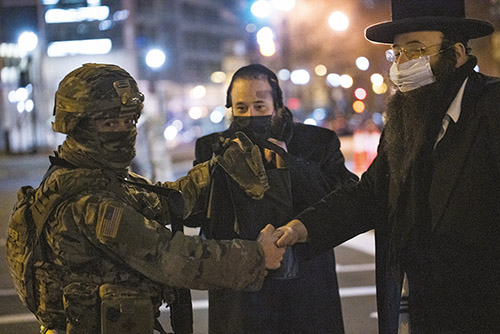 Read the article below written by Sandy Eller, in the Jewish Link, about how Masbia Soup Kitchen leading by our ED Alexander Rapaport headed out to Washington D.C. to express his gratitude to the National Guard and distribute snacks and essential items among soldiers designated to secure the area.

A Show Of Appreciation For The National Guard

With their long, curly payos and distinctive black coats, it was clear that Masbia Soup Kitchens founder and CEO Alexander Rapaport and Rockland County Legislator Aron Wieder were miles from home as they visited dozens of National Guard checkpoints in Washington, D.C. But neither of the two men could resist the opportunity to express their gratitude to the servicemen and women who were deployed to the nation’s capital in order to keep the peace during last week’s presidential transition.

The idea of making the eight-hour round trip from his home in Boro Park to Washington, D.C., came to Rapaport as he remembered how his mother would pack every item imaginable every time she traveled anywhere. Figuring that the thousands of National Guard members safeguarding the Capitol on Inauguration Day and the recent unrest likely didn’t have time to ponder every possible circumstance, Rapaport decided to head down to Washington, bringing items that the troops may have forgotten to stash into their duffle bags.

Rapaport realized that he needed a staging area and he reached out to Colorado Security Agency, which helps him run Masbia’s round-the-clock food distribution in Brooklyn, and also has a branch in Washington, D.C. But the conversation took a slightly different turn, with the head of Colorado Security volunteering to donate all of the food and toiletries, in addition to making one of his employees and a pickup truck available for the distribution. 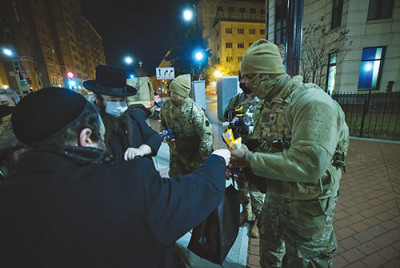 Rapaport went together with Masbia chef Ruben Diaz to Jetro Cash & Carry/Restaurant Depot on the morning of January 19 to stock up on snacks and toiletries, picking up packages of baby wipes, masks, Kind bars, Oreos, M&Ms, Nature Valley Granola Bars, Hershey’s chocolate, Trident gum and Ice Breaker mints, as well as Red Bull and Monster energy drinks, choosing brands that would be easily recognized and appreciated. Heading south on I-95, Rapaport took his tallis and tefillin, not quite sure when he might be heading back to New York.

When Rapaport and Diaz reached their destination, they worked together with a former marine who worked at Colorado Security, taking everything out of its wholesale packaging and filling up the bed of their pickup truck with their purchases. Driving to the dozens of National Guard checkpoints dotting Washington, D.C.’s designated outer perimeter was a surreal experience for Rapaport.

“The streets were very empty and there was literally no one walking there, only the troops at the checkpoints,” said Rapaport. “Everything was fortified and the closer we got to the perimeter, the more stores were boarded up with plywood.”

As they got within a half block of each checkpoint, Rapaport’s Colorado Security companion went ahead to speak with the National Guard to make sure that their pickup truck wouldn’t be construed as a threat and to let them know that they were coming in to distribute snacks and other essential items. At every stop, Rapaport took great pride in jumping out of the car and cheerfully announcing, “We brought you some love all the way from New York!”

The group received a warm reception, with some of the servicemen and women taking an item or two while others walked away with full bags. The distribution went on well into the night until the pickup truck was completely empty, with Rapaport estimating that they had stopped at 35 different checkpoints in the city’s outer perimeter and had given out thousands of dollars’ worth of supplies before they headed back to Brooklyn the next day. By the time Rapaport got home on Inauguration Day, word of his visit was making the rounds on social media, with Wieder reaching out to say he would have welcomed the opportunity to express his gratitude to the troops. Despite just having driven back from Washington, D.C., Rapaport decided to turn around and head south again for an encore distribution that same night, with Wieder on board as part of the team. Colorado Security stepped up again to provide the manpower and the vehicle, as well as sponsoring a second massive round of snacks, drinks and other essentials.

Hoping to visit new checkpoints, the team made their way to the barbed-wire fencing surrounding the inner perimeter, leaving bags of food by gates in places where no one was allowed in or out, and delivering treats in person in other areas until 2:30 in the morning. Wieder, the grandson of four Holocaust survivors who were all liberated by American troops, was grateful for an opportunity to express his heartfelt thanks to the men and women in uniform.

“The soldiers were very appreciative, especially when they heard that we had driven all the way down from New York,” said Wieder.

“There was a unit from Pennsylvania who gave us a patch that they put on their uniforms as a thank you,” added Rapaport. “We got a lot of ‘shalom aleichem’s and one guy told us he had a minyan for Shabbos, so obviously there were Jewish service people.”

Both Wieder and Rapaport felt that it was well worth making the approximately 500-mile round trip to show their support, especially at this particular moment in time. Rapaport, whose work with Masbia often has him rushing into problem areas to lend a hand, is contemplating another trip to Washington, D.C., this time to distribute pillows and blankets.

“We are a nation that needs healing and I’m pretty sure that almost every shul that made a mishebeirach (special prayer) last week for Donald Trump made one this week for Joe Biden,” said Rapaport. “It is important to have frum people coming out and showing their support for the stability of our nation, our democracy, our troops and our government.”