Masbia In The Jewish Press and Hamodia: Record-Setting Passover at Masbia Brings Relief to Thousands of New York Families 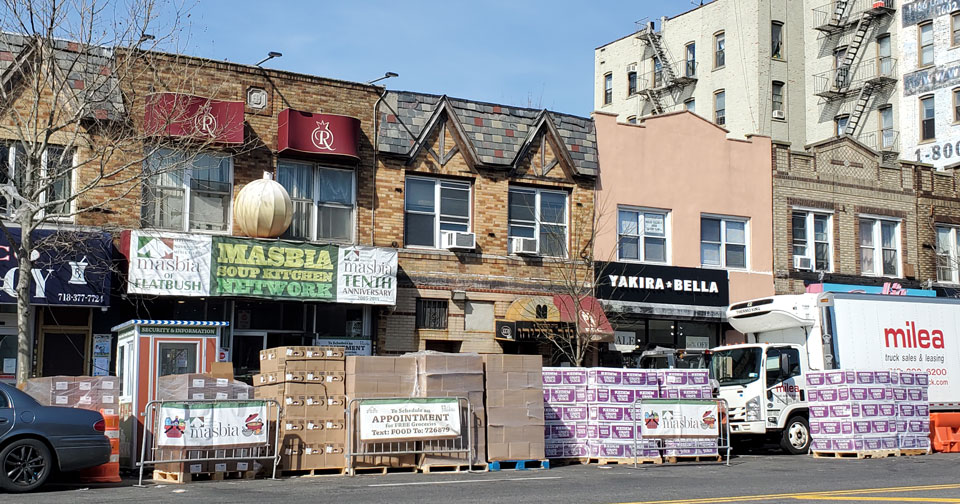 Read the article below written by Laura Allen, published in The Jewish Press and Hamodia, on Masbia feeding nearly 20,000 families during the Passover season via two systems, on-site Passover meals, and massive food distribution. A little pamphlet of Kosher for Passover ground chicken recipes, written by Masbia’s COO, Chef Jordana Hirschel, was included in the distribution to help with some ideas to prepare delicious dishes for Passover.

New York - Last week, the renowned Masbia organization wrapped up an unprecedented Passover season that saw the charity network further expand on its mission of feeding families in the community. This year’s wide-ranging activities supported close to a staggering 20,000 families, a lot of them large families blessed with children.

The relief efforts were made available in many forms, but all were carried out with generosity and utmost dignity. From the early stages of planning, ambitious goals were set and exceeded, culminating in a successful mission that was received with gratitude by those who were assisted.

Early in the cold winter months, Masbia’s leadership set out to secure storage and distribution space to hold the massive volume of food needed for what was poised to be an unprecedented, historic Passover Season. In Borough Park and Flatbush, adjacent spaces to the original Masbia branches were rented, effectively doubling each location in size. The additional spaces soon proved to be critical and might become a permanent part of Masbia going forward.

The shortages and supply interruptions brought about by the COVID-19 pandemic and resultant lockdowns spurred Masbia Director Alexander Rapaport to get started early on procuring access to Israeli matzah and other items that soon became hard to come by. “We locked in rates early on some items that would end up costing us double the amount if we waited until later in the winter,” he said. An eye-catching 5,000 pounds of New York hand matzah were ordered early, a move that continued to become more prescient as the months passed by.

The distributions for large families took place around the clock in the weeks leading up to Passover. Each family received pre-packed sets of food items, with larger households receiving additional sets. Among the many items, Masbia partnered with KJ Poultry and purchased nearly 100 tons of its innovative new ground chicken. The poultry processor had recently launched this new item produced with a special centrifugal force that separates all chicken from the bones and cartilage, resulting in a superior, more meaty blend.

As this item is new to the market, Masbia’s COO, Chef Jordana Hirschel put together a little pamphlet of Kosher for Passover ground chicken recipes with a number of dishes that can be prepared with the ground chicken. Twenty thousand copies were published and distributed, and feedback around the community regarding the ground chicken was overwhelmingly positive. The new ground chicken created such a sensation, that Mr. Rappaport was interviewed by the popular Kol Mevaser hotline to discuss how the product is produced and the process that leads to such results. 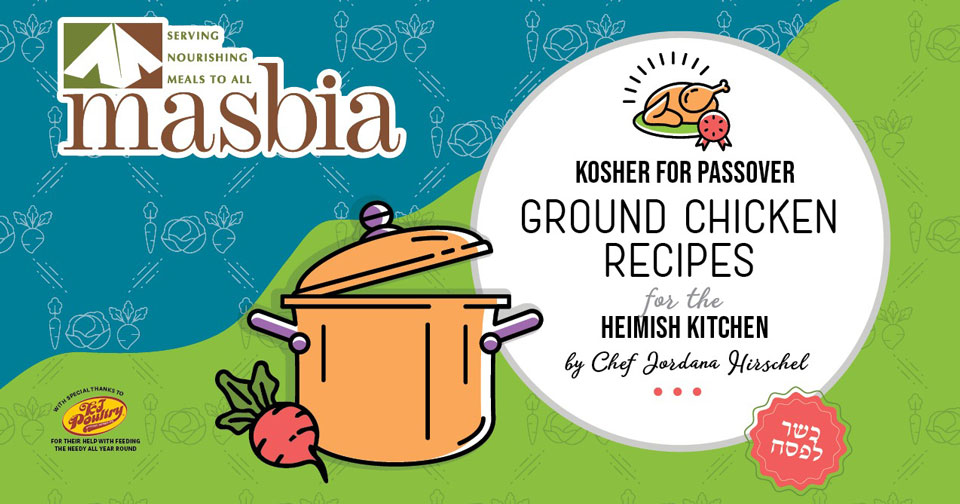 This year also saw the addition of dairy products to the Passover distribution with each family receiving sets that included over 50 dairy items. With the effects that the pandemic has had on the service industries, milk and dairy producers were left with excess inventory. As a result, NYS Governor Cuomo offered grants that encouraged soup kitchens and relief organizations to help offload some of this remaining stock to people in need. As some Chasidish families avoid milk products on Passover, Masbia began distributing these items many days before Passover so that children had food to eat during their school break.

During the weeks leading up to Passover, refrigerated trailers and trucks were lined up outside to accommodate the tremendous amount of food that was to be handed out.

The demand for Passover food was so great that three more 24-hour days were added. Usually, raw food distributions stop where Passover begins. This year during the middle days, known as Chol Hamoed, Masbia continued to distribute raw food for the first time in sixteen years. Whether a family ran out of eggs or needed matzah for second days, Masbia would not let anyone down.

In all, nearly 20,000 families totaling close to 100,000 individuals received food support during this record-setting season. With Masbia’s help, grateful families of all income levels and backgrounds were able to provide a wonderful and wholesome Passover for their children.

After Passover last year when Masbia was unable to host any guests on-site, it was heartwarming to once again invite individuals and families to eat Passover meals at Masbia. While the Seder night was an uplifting Passover highlight, Mr. Rapaport, uniquely attuned to the needs of the destitute, noted that the other Passover and Chol Hamoed meals are actually of even greater importance for Masbia to be open as lonely individuals are less likely to receive a friendly invitation.

In that same way, Shabbos Hagadol - the sabbath before Passover - is also a time when it is hard for such individuals to get an invitation to a meal. This year, Passover began right as the Sabbath ended, so Masbia served the Sabbath meal at the neighboring Schnitzy restaurant so the diners could enjoy the Sabbath meal without compromising Masbia’s Passover kitchen. As Passover preparations began in earnest, the apartment above Masbia was leased for the family of Menachem Mendel Teitelbaum who would serve as mashgichim throughout the entire food preparation. To be sure that all Passover rules were properly followed, an adult was always in the kitchen with the staff - without interruption.

Throughout Passover, the Teitelbaum family made sure the meals were uplifting and inspiring, with Divrei Torah shared and zemiros sang in unison. During Chol Hamoed, two meals were served every day so that those who are old and frail and could not kosher their home for Passover would not go hungry. Dozens of individuals streamed in by the hour to eat a warm and nourishing seudah. At more than one point, the mashgiach went back into the kitchen and had the crew begin cooking anew to accommodate the overflowing crowd.

“It is incredibly satisfying to know that we were able to improve this festive time for so many families,” says Mr. Rapaport. “I have to thank our staff and volunteers, and of course, the vendors and generous donors of Klal Yisroel who made all this possible. Their zechus is tremendous!”

Download the PDF version of the article in the Jewish Press HERE. 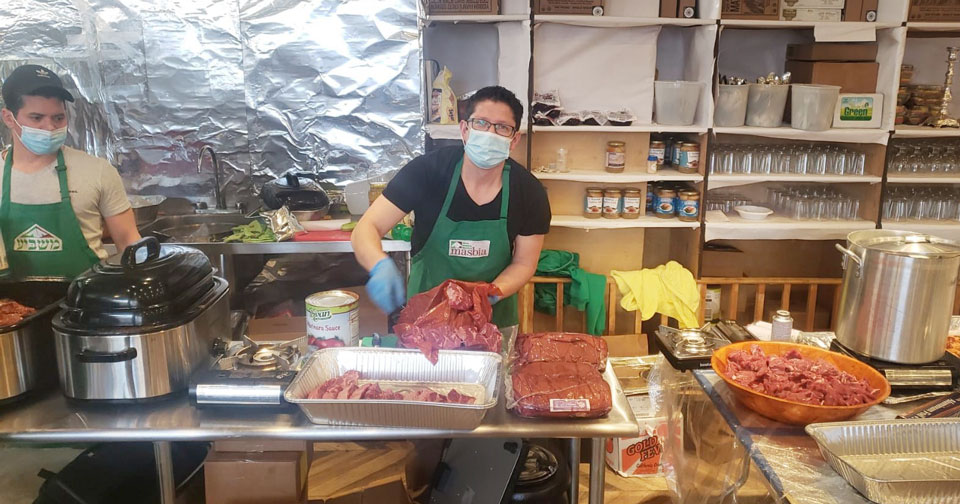 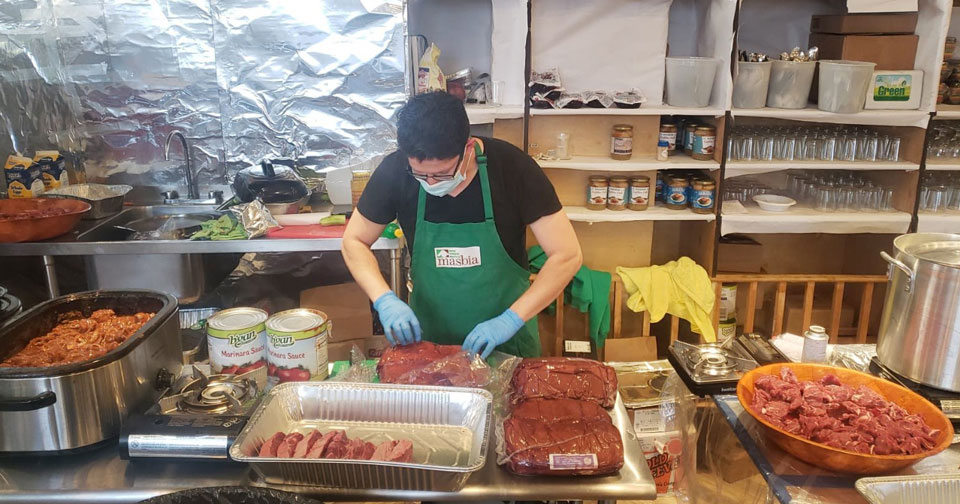 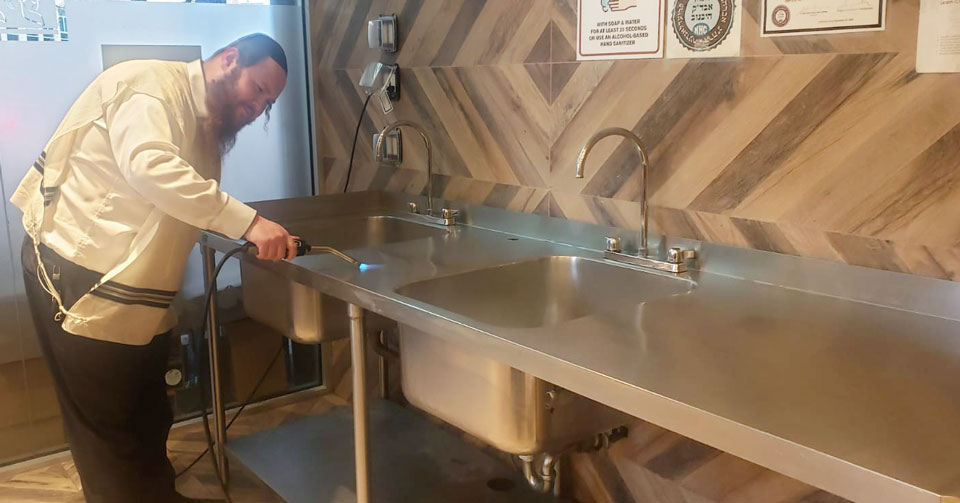 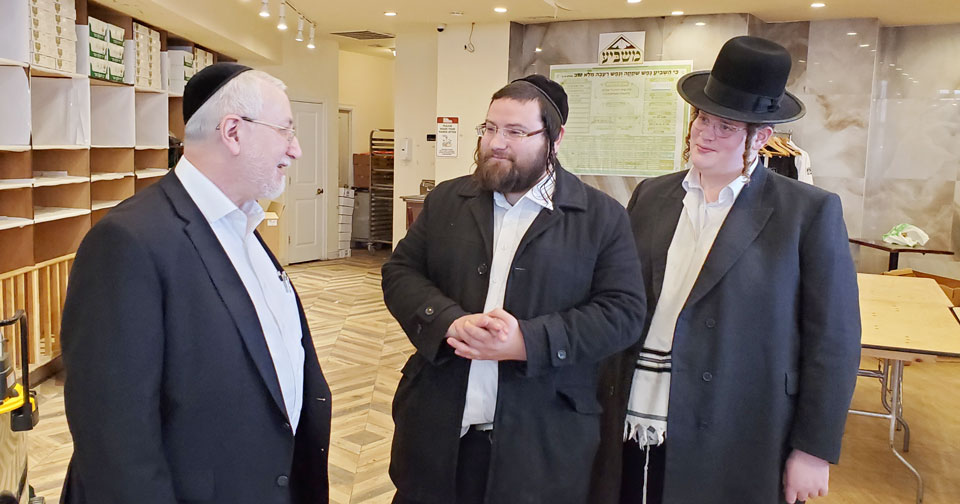 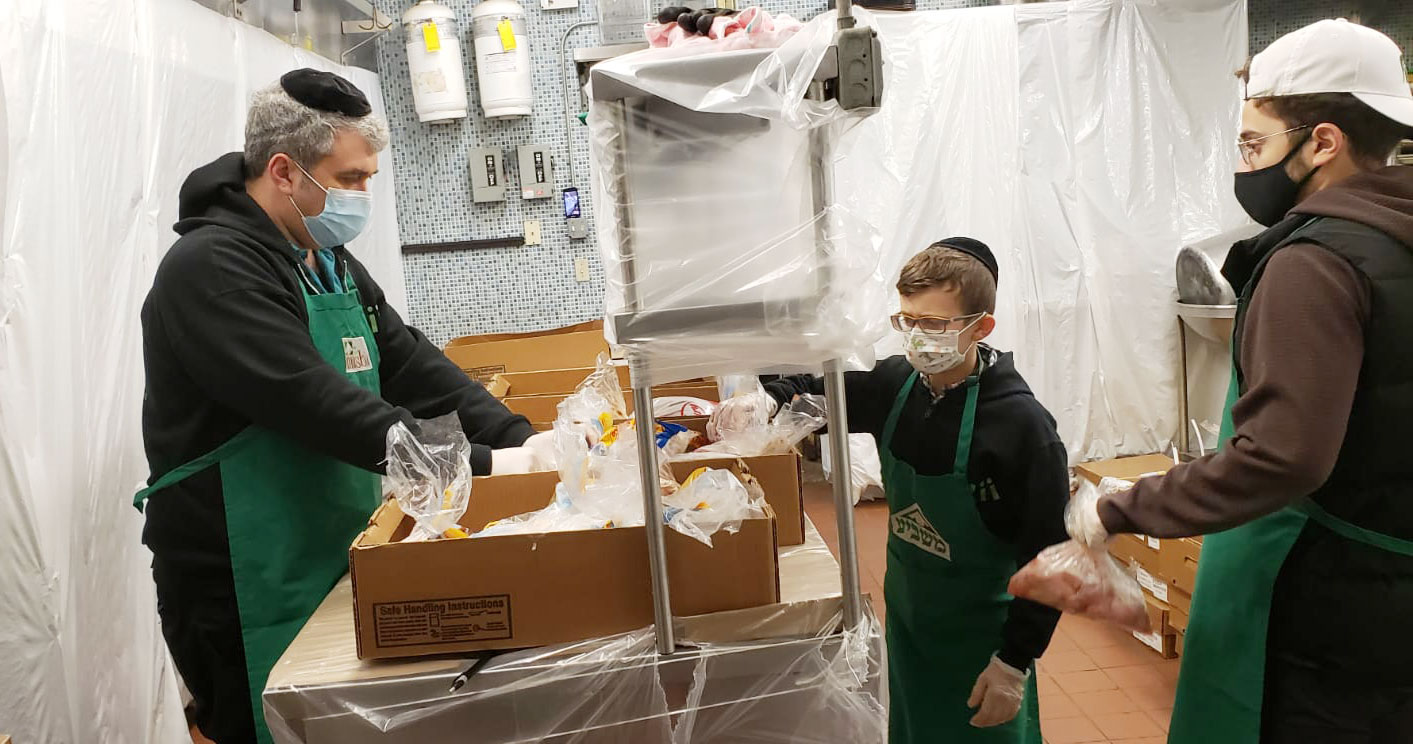 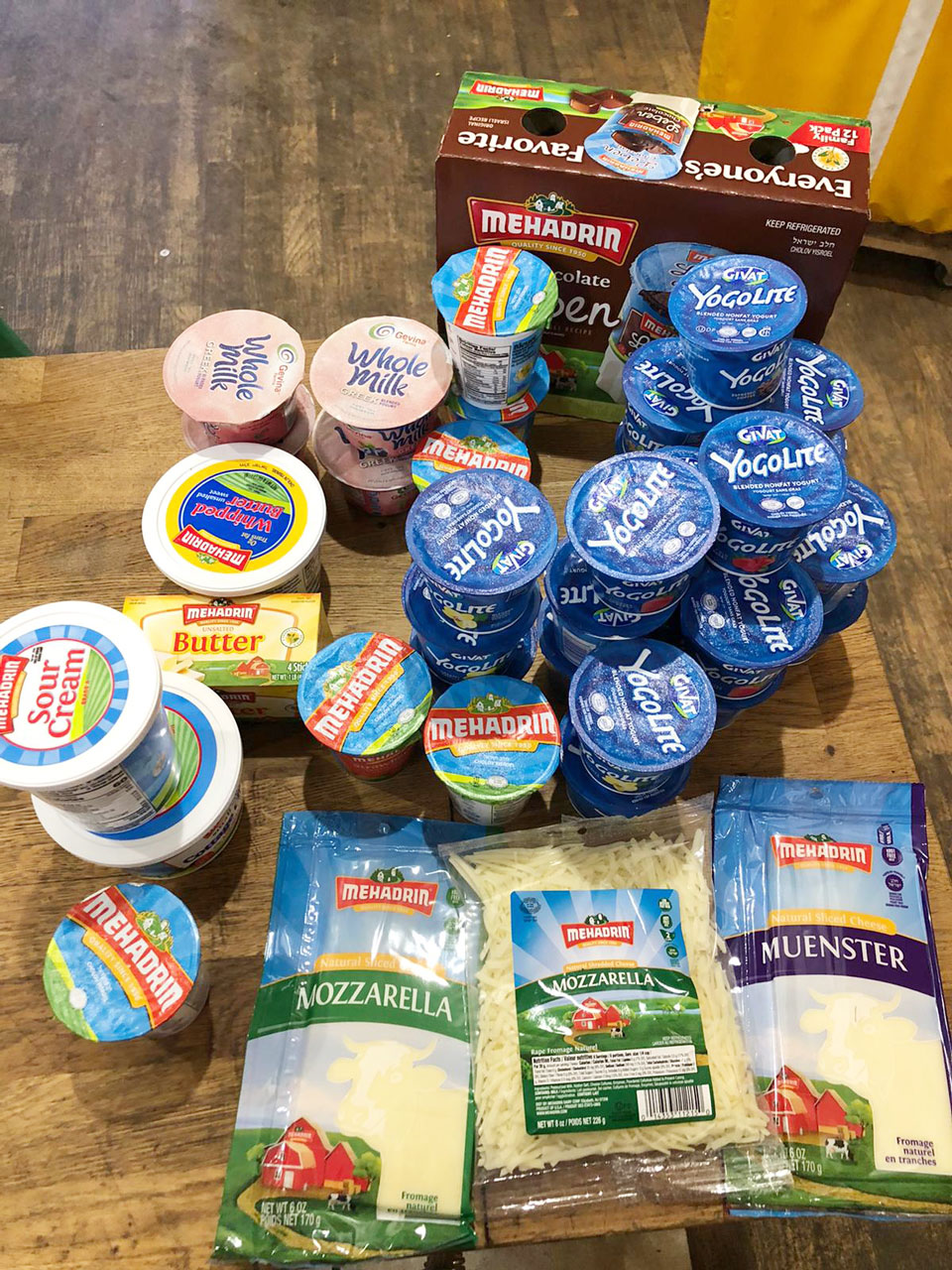