Masbia in the Tablet Magazine: Survival requires people to take care of other people 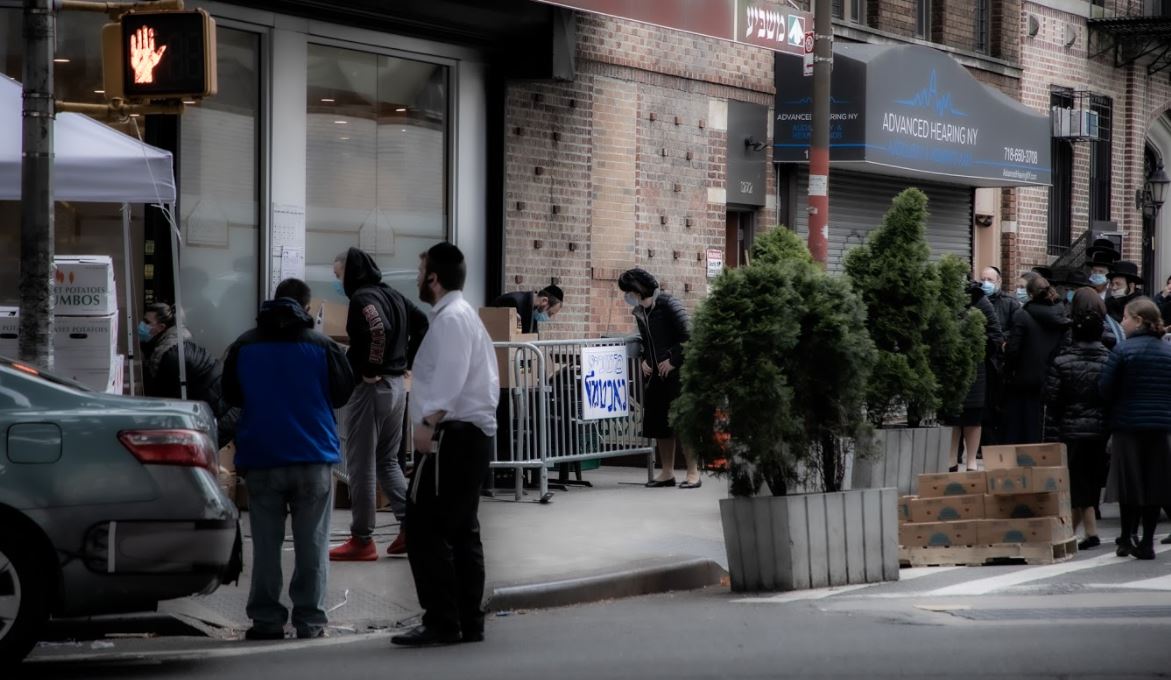 Read the story below, written by Armin Rosen, in the Tablet Magazine, on a heart-to-heart with two outstanding members of Borough Park community, facing the coronavirus outbreak the best way they know: "lending a hand to others", Alexander Rapaport of Masbia Soup Kitchen Network and Mordy Getz of Eichlers of Boro Park.

The porch minyan rules are strict on Mordy Getz’s block. There’s never a Torah service—reading from the Torah requires too much crowding around a single point in space for it to be safe or practicable, even into the eighth week of New York’s coronavirus plague. No one leaves their porches or balconies; if someone tries praying from the street the daveners begin clapping in order to shoo away the scofflaw.

On a rainy Friday morning Shacharit had already wrapped up by the time I got to Getz’s block, but the shouts of a chazzan echoed from a street over, followed by the responses of his atomized congregants. The scene farther up 18th Avenue divested the morning service of any possible whimsy. A line of people snaked around the block outside of PS192, many of them in black coats or long skirts or kippot. Entire Jewish families waited on line. Days earlier, the city government announced it would begin providing free kosher meals to anyone who needed them. But in Borough Park the needs are still daunting—according to Masbia soup kitchen Executive Director Alex Rapaport, some 80% of people showing up at the neighborhood food pantry are first-time recipients, even now, nearly two months into the crisis.

The youthful and energetic Getz, who speaks quickly yet calmly and who can handle a visiting journalist and five homebound young children and Shabbat preparation and avalanches of WhatsApp messages and phone calls without seeming to surrender an inch to chaos, is not easily daunted. Sitting at safely distant opposite ends of a long dining room table, myself near a cabinet of glittering silver Shabbos supplies and under a tasteful chandelier that resembles an inverted ziggurat, he gave me a brief life story: “First, let me tell you about myself. I got married, I was in Kollel for a few years, I went to work—baruch HaShem, I was successful.”

Getz’s empire now includes a chain of urgent care centers, various real estate ventures, and Eichler’s—one of New York’s major Judaica hubs. It is also a vehicle for Getz’s strong communal and charitable feelings, which are rooted in personal experience. “About three years ago I was diagnosed with cancer. I struggled,” he tells me. “Four months of treatment and then two months of recovery, and then another year of issues, complications.” As Getz recovered, he learned about research into how lengthy illnesses could sap their victims’ ability to reintegrate into their previous lives. He began wondering how he could use his own experiences and resources to help people who had been through similar ordeals.

Then the coronavirus hit. In mid-April, Getz announced that until Rosh Hashana, he would pay for groceries for any Borough Park family that had lost a primary breadwinner during the epidemic, as part of a program run through Masbia. A couple of dozen families now qualify. They will be able to buy directly from local grocery stores with Getz footing the bill, at an anticipated cost of around $7,000-$8,000 per family, in the hopes of covering the period between the parent’s death and whatever the next step might be, whether it comes from government assistance, remarriage, or new employment.

A few weeks earlier, Getz had started giving books from Eichler’s away to children who had lost a parent during the plague. He showed me a picture of a boy who looked like he was in his early teens, smiling and hugging a volume of the Shulchan Aruch. Nothing about the image indicated that the boy’s life had just been shattered by something unthinkably capricious and unfair—the gift had soothed the tragedy’s sting, at least for a moment.

Across the community, people understood the comfort that the vast inventory at Eichler’s could provide. “At Eichler’s, 1,000 people called in,” said Getz. Early in the crisis, photos circulated of young children crying at a parent’s grave; 200 people called Eichler’s to purchase toys or books for them. “Everybody wants to jump in and help,” said Getz.

“People don't have resources, but they want to be helpful,” added Rapaport, who had just arrived and was now sitting midtable. “It’s in our instinct to help each other,” said Getz. “But,” chimed in Rapaport, “they create this huge amount of chatter.” Getz added, “It’s impossible to cope with, impossible.”

Getz’s number is unlisted, though recently someone called his mother in the hopes of getting in touch with her son for tzedakah-related purposes. “She called my mother’s house and my mother says, you have to help her. And I don’t even know the story—she doesn’t even want to tell the story to my mother.”

There’s a Yiddish word that describes how some members of the Borough Park community have reacted to the coronavirus crisis. “Hospitals aren’t capable of getting supplies the way Hasidim knows to call a contact and get it done. It’s a different talent we have. It’s called erledigen.”

Erledigen is untranslatable, Getz says—think of it as the ability to find large quantities of some unfindable, life-or-death item at 2 in the morning. “It’s a word for ‘to get it done,’ but it’s more than that. It insinuates getting it done in a crisis. That’s something people in the community are very good at.” In Getz’s case, the skill of erledigen has been applied to acquiring extra dialysis machines for local hospitals as the plague escalated. But the crisis of the coronavirus era isn’t merely physical. Minds and spirits are also suffering.

Getz has helped bring magic erledigen cures for those victims, too. There’s a must-have book of the pandemic in Borough Park, one that Eichler’s can’t keep stocked—Kichel, a comic strip about the life in an Orthodox family which ran in Mishpacha magazine, was recently anthologized into an invitingly hefty single volume. Kichel has a vaguely Where’s Waldo aesthetic, in that the imagery is dense enough to fascinate the hungriest young mind. But the comics also have large bubbles of English-language text, which are perfect for blossoming readers and their parents.

The books, printed on a durable, broadsheet-size paper stock that anticipates countless trips around a large family over a period of many years, fell victim to a mindboggling shock to the Jewish publishing supply chain: Kitchel, likely to go down as a cherished positive memory from the worst period in Borough Park’s history, was partially printed and bound in Wuhan, China—origin of the virus that has killed scores of the neighborhood's residents. Before Purim, the book had already sold out; for the next two months, thousands of copies sat in boxes in the Chinese plague zone. The printing plant has now reopened, and Getz recently fronted the publisher money to print additional copies and ship them to the United States by air. They sold out almost immediately.

Hirsch Traub, CEO of Menucha Publishing, had known about the virus before nearly anyone, thanks to his Kichel anthology. “They warned us,” he said of his company’s contacts in the Wuhan plant, which had shut down in January. “They said they have family members who were dying. ... They said don’t take it easy, don’t take it lightly.”

When the delayed shipment of Kichel books finally arrived at the publisher’s warehouse outside New York City, “everyone was scared to touch it.” Before the books shipped, Traub called a company that “disinfected the whole office, the whole warehouse. They came by night, they sprayed all over the place, I don't even know what they did.” Traub, whose company has been printing in China for eight years, estimates that “99.9%” of Jewish books printed in color are made in the country that’s now notorious as the birthplace of COVID-19. Chinese plants are willing to print in small quantities, unlike their American counterparts, although snafus do sometimes happen—one publisher’s Talmuds were printed on paper so thin that the text bled over to the opposite side of the page.

One of Getz’s young kids—a Kichel reader, no doubt—is either a budding artist or a budding writer or both. He brought over a stack of paper with the cover written in colorful Hebrew lettering: “Seder Korona,” meaning, the order of a typical day under the virus. Each page had an exact time of day written in the upper right-hand corner.

The elder Getz translated the Yiddish text bubbles: “He started at 9:46 in the morning. Kids are on the Game Boy. Mommy says you gotta shut it, you have to call the hotline”—the distance learning hotline. Later: “They’re playing chess against the computer. He’s saying we have to go back, but that’s called cheating, but we can only go back one move.” On another page, the kids are pretending they’re the Miami Boys Choir singing “Hinei Ma Tov.”

The children were at least keeping themselves active and entertained, I said. Getz laughed: “But if you see the pictures it reflects more of the reality. Every page is like, I want this and he wants that. It’s amazing.”

Few places on Earth have been as hard-hit by the coronavirus as Borough Park, and yet few are as likely to emerge from the crisis in as similar a shape to which they entered it. In parts of New York, the restaurants, nightspots, and places of commerce that give each neighborhood its distinct character are liable to be wiped out or to return in some lessened or adulterated form. But while a concert venue can close, a mikvah or a shtible or a kosher butcher can’t—and they won’t. Breadberry, a high-end kosher grocery store up the street from Getz’s house, has a security guard posted at the entrance ensuring everyone puts a mask on (as well as someone selling masks and gloves just inside the entryway). Eichler’s is still doing a brisk business online—people need books for Shabbat, and toys to keep their children distracted.

“God in Borough Park is like steel in Bethlehem,” mused Rapaport when I asked about the neighborhood's post-virus future. God is perhaps the more durable driver of communal and economic life. Steel is a material thing: Significant labor and infrastructure are required to extract, sell, and refine the stuff. But God is infinite, and in a religious neighborhood, HaShem is both intangible and quite literally everywhere.

“Everything is Judaica here. ... Even a cookbook is Judaica,” Rapaport noted. Things will continue in something like their prior form because Jewish life is vast enough and durable enough to withstand nearly anything and has also withstood much, much worse than this. Plus, “Hasidim are wired to resist any remake,” said Rapaport. Then, immediately switching to speaking about Jews in general, he added, “That’s how we survived 2,000 years.”

Yet survival doesn’t happen automatically. It requires people to take care of other people, in addition to taking care of themselves. With the crisis still raging, Getz urged those lucky enough to be able to take care of others not to shy away from their responsibilities. “This is a time when people that God blessed with more success should really be doing what’s right,” he told me. “These aren’t normal times and it’s times like this that show who people really are. People really have to prepare to take the resources God gave them and share it.” Mordy Getz, may he live until 120, has done that, at the moment of his community’s greatest need and sorrow.