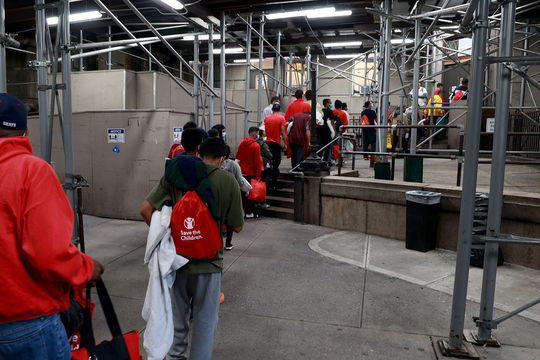 These days when you hear “border” the next word is usually “crisis.” The same is true for “labor”: The U.S. Chamber of Commerce calls the labor shortage a “national crisis by the numbers.” Now the two crises are combining to make matters worse.

When I visited the border town of Del Rio, Texas, in April, help-wanted signs were everywhere. That month alone, U.S. Customs and Border Protection officers patrolling the U.S.-Mexico border reported 235,785 migrant encounters, 71% of which were with single adults. Everyone I talked to wanted to work.

A similar phenomenon is developing here. Masbia, a nonprofit that has been distributing shoes to migrants who arrive in New York City by bus, has heard from farms and factories looking for workers, executive director Alexander Rapaport says. But released migrants struggle to secure work permits and have to rely on family, increasingly strained public services or illegal employment.

This is what failed immigration policy looks like. Since President Biden took office, the U.S. has admitted more than a million migrants into a system that was designed neither to handle an influx on this scale nor allow arriving migrants to thrive. No surprise—it’s buckling.

In fiscal 2022, which ended Sept. 30, CBP reported more than 2.3 million encounters at the southern border. Roughly one million migrants were expelled under Title 42, a pandemic-era regulation. On Nov. 15 Judge Emmet Sullivan struck down the use of Title 42, meaning that the administration could effectively lose its only form of border control.

The other 1.3 million were processed for removal under Title 8 of the Immigration and Nationality Act. Those who have claims of “credible fear” that qualify them to apply for asylum go into formal removal proceedings and are scheduled to appear months later before an immigration judge. Since detention space at the border is nearly full, many await their court date in the U.S. interior.

Almost 700,000 migrants were released in this manner during fiscal 2022. More than370,000 of them were granted humanitarian parole, which temporarily authorizes their presence in the U.S. The Immigration and Nationality Act gives authorities discretion to grant parole “on a case-by-case basis for urgent humanitarian reasons or significant public benefit.” But a 2008 memorandum of agreement among three enforcement agencies calls humanitarian parole an “extraordinary measure” to be used “sparingly.”

The system can neither detain nor process migrants at the rate they are arriving. The Biden administration has tried to ease the bottleneck by making it easier for migrants with qualifying claims of credible fear to apply for asylum immediately at the border instead of waiting for a court date or finding an attorney. But less than 1% of migrants end up in this category, according to Aaron Reichlin-Melnick of the American Immigration Council.

As for the migrants in the interior, they can’t work legally. “Most people will not get a work permit until around one year after arriving at the border,” Mr. Reichlin-Melnick says.

Even after court dates and asylum applications, most migrants have to wait another 150 days, or roughly five months, to apply for an employment authorization document, or EAD, with the U.S. Citizenship and Immigration Services (USCIS). (There are exceptions for Cubans, Haitians and Ukrainians, who get faster access to EAD applications.)

In early October I visited HRA Men’s Shelter in the Manhattan neighborhood of Kips Bay. The scene was chaotic after the arrival of another bus load of mostly Venezuelan men. Three told me they were ready to work in construction; another said he wants to be an elevator operator. I asked if they’d received any guidance on work permits. “We lack information,” one said.

Charitable organizations trying to help migrants find the system perplexing too. The Skyline Foundation offers migrants training for construction jobs, including Occupational Safety and Health Administration certification and site-safety training. Executive director Shana McCormick says the goal is to “create a career pathway . . . and a way for them to become self-sufficient.”

But after training 120 migrants since August, the program had to “pause” because it was running out of money. “The training is not cheap,” Ms. McCormick says. Skyline plans to offer training only to those who are close to legal employment. In the meantime, migrants like those at HRA work off the books. One man said he’s doing odd jobs. Another unloads trucks. One works in construction.

The system fails migrants and strains social services while depriving American businesses of the labor they need. Sharon Western contacted Masbia with an offer to house and employ migrants on her 140-acre New Hampshire horse farm. “They know how to do the job,” she says. “Compare that to the quiet quitters.” Masbia wasn’t able to connect Ms. Western with migrants who had the proper legal authorization.

An example of the administration’s weak response to the crisis: The Department of Homeland Security announced on Oct. 12 a new enforcement process designed to stanch the flow of migrants from Venezuela by removing them under Title 42, though up to 24,000 will be eligible for parole and work authorization if a sponsor will provide financial support. DHS touts the plan as “part of the Biden-Harris Administration’s ongoing work to build a fair, orderly, and secure immigration system.”

But Venezuelans accounted for only 8% of migrant encounters in fiscal 2022, and the employment-authorization backlogs aren’t going anywhere. Unless Judge Sullivan’s decision is overturned on appeal, the policy is dead in the water in any case. If the order stands and Title 42 ends in December, the Biden administration will face two options. It can flood the broken system further and make the crisis worse. Or it can clear backlogs, issue more work permits, and seek reform through legislation. But so far, not even crisis has been an impetus for action.

Appeared in the November 25, 2022, print edition as ‘The Labor Shortage and Border Crisis Collide’.