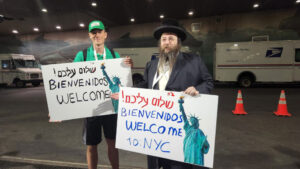 Migrants arriving in the Port Authority bus terminal in New York City coming from Texas are greeted by many charitable organizations; one of which has a name that’s neither Spanish nor English. Masbia, known for its kosher food distribution programs and soup kitchens, has undertaken to provide migrant asylum seekers with a necessity most people take for granted – shoes.

Though mostly involved in food distribution, Rapaport has branched out his organization into the sphere of relief work.

“We run a soup kitchen all year round. We started getting involved in relief work…we went to Kentucky during the tornado, when there was a flood..we went to the Bronx when there was a large fire. We have an army of donors, which makes these initiatives possible.”

Immigration affairs representatives told Rappaport that the most sought-after resource that the migrants are missing is shoes; some come barefoot, or with very thin flip-flops. Rappaport created a fundraising page specifically for the cause; he says that Masbia has separate pages for all of their projects, giving donors a choice to decide where their money goes.

“We’re trying to restore their humanity, their dignity.”

Masbia has given out over 3,000 pairs of shoes since the operation began last month, Rapaport says. The organization also gives out hygiene products and snacks.

The migrants, Rapaport says, are not illegal immigrants, but asylum seekers from Venezuela, a once-thriving democracy which is currently under a dictatorial socialist regime.

“It’s a collapsed government,” he says. “These people aren’t coming in illegally; they’re going through the channels to seek asylum, and are awaiting approval.”

The danger the migrants face on their way to America is harrowing, Rapaport says

“A lot of them are robbed and assaulted in the Panamanian jungle…I don’t speak Spanish, but I see from the way my staff’s faces change colors upon hearing the accounts that they are experiencing tremendous suffering.”

Texas Governor Greg Abbott has said that his state is overrun with migrants, and is sending them to New York where they can “receive the abundance of city services and housing that Mayor Eric Adams has boasted about within the sanctuary city.” Florida and Arizona are sending migrants to Democrat-run cities as well, including a group of 50 who were flown from Florida to Martha’s Vineyard in Massachusetts earlier this week.

Critics of the policy say that the move is a political stunt, and that migrants have suffered a lot on their journey, are confused, and don’t understand what’s being done to them.

Rapaport says that politics is motivating governors to take chances with peoples’ lives.

“Politics is now playing with their lives…it’s important to look beyond the politics and see their humanity.” 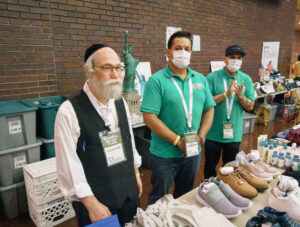