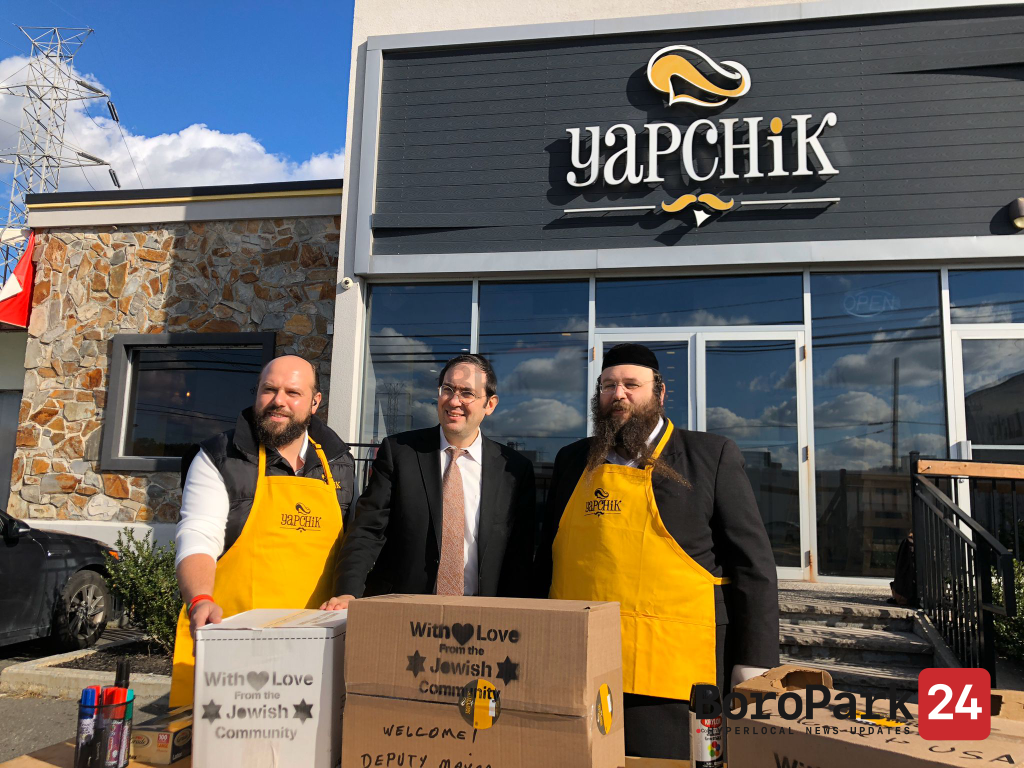 Read the article below by journalist Yehudit Garmaise, published in Boro Park 24, on grandchildren of Holocaust survivors joining to send food and supplies to Afghan refugees. Alexander Rapaport, Berish Rapaport, and Deputy Mayor Menashe Miller met at the Yachik restaurant to fill two trucks with food and messages of love to refugees.

Alexander Rapaport, the CEO of Masbia, led the efforts of a handful of volunteers this morning, who quickly responded to a WhatsApp group he created just a few weeks ago to recruit helpers to pack up food, hand sanitizers, and hand wipes for the more than 10,000 Afghani refugees at the Fort Dix military base in Burlington County, NJ, where they have been since they had to leave their home country after the Taliban took over after the United States pulled out its troops at the end of August.

Masbia's volunteers, many of whom are the children and grandchildren of Holocaust survivors and kedoshim, are also sending food for the many Afghani refugees who have settled in Jersey City, NJ.

With a lot of energy, compassion, and mesirus nefesh, Rapaport, his father, Yosef Rapaport, Rockland County Legislator Aron Benzion Wieder, and the volunteers met up at 5402 New Utrecht Ave. to pack up enough boxes of rice, tomato sauce, chips, snacks, which were donated by Dependable Food and cleaning supplies, which were donated by Future Diagnostics USA, to fill two trucks that are on route now to New Jersey, and only the first of many to come.

On their way to Fort Dix, the trucks drivers were just greeted by Lakewood Deputy Mayor Menashe Miller at Yapchik, the Lakewood restaurant that is owned by Rapaport’s brother, Berish, who donated waffle mix and cereal for a Fort Dix’s regular Sunday waffle breakfast.

“We made sure to provide vegetarian foods, so the refugees, who are mostly Muslim and have their own dietary laws, feel comfortable eating what we send,” said Rapaport.

How long will Masbia continue to send food to Fort Dix and Jersey City?

“As long as we have supplied, we will be doing this,” said Rapaport, who added that many ba’alei tzedakah, such as Elush Spitzer, have continued to offer donations of other needed items, such as clothing. “There are many different things that they need. We don’t have a plan to finish. We know refugees will be there for a long time.”

Not only did the volunteers pack up the food with a lot of zrizus and efficiency, but volunteers, many of whom have relatives who were refugees themselves after the Holocaust, but the volunteers decorated the boxes they packed with messages of love and support.

“We wrote with stencils: ‘With love from the Jewish community,’ and ‘Welcome to USA.’

“After Yidden were freed from the camps, our grandparents were running everywhere, and it was such a challenge to again find places to call home,” Rapaport said. “Our ancestors, who were all refugees, had to go to many places, like Canada.

"We understand that feeling of being so dependent on the help of others. We remember those who did care and allowed people to come in."

Every Shabbos meal and seder that Rapaport can remember from his childhood involved his Bobbi Rivka Brauer, who was from Lemberg, Germany, telling her children and grandchildren stories about her struggles to find beets and potato peels with which to feed the elderly, the frail, and the dying Yidden in the Bergen-Belsen, where she was imprisoned as a teen.

“My Bobbie used to talk a lot about what she did during the Holocaust, in the concentration camps: how she stole beets from the SS, and she did it again and again: just to save people’s lives,” Rapaport remembered. “She told me when I was a kid that she went with beets to piles of dead bodies and shouted out, and said ‘Is anyone alive? Is anyone alive?’

“And she would push beets in people’s mouths, she always cared for people who didn’t have food, hosting guests on Shabbos and Yom Tov with an open door, and all of that stuck with me.

“At seders and other meals, when we had beets and borsht, she would say, “'This is lechem oni.

“How many times was I beaten for stealing beets from the SS to give to people to eat?'”

Rapaport explains that he wants to continue the legacy of his grandmother's mesirus nefesh to provide food and comfort to others.

“We want to grow that and give that back to people who are running from war zones now," he said. "We want tell them that we share their pain.

"We understand where they are coming from because we are also a community of refugees.” 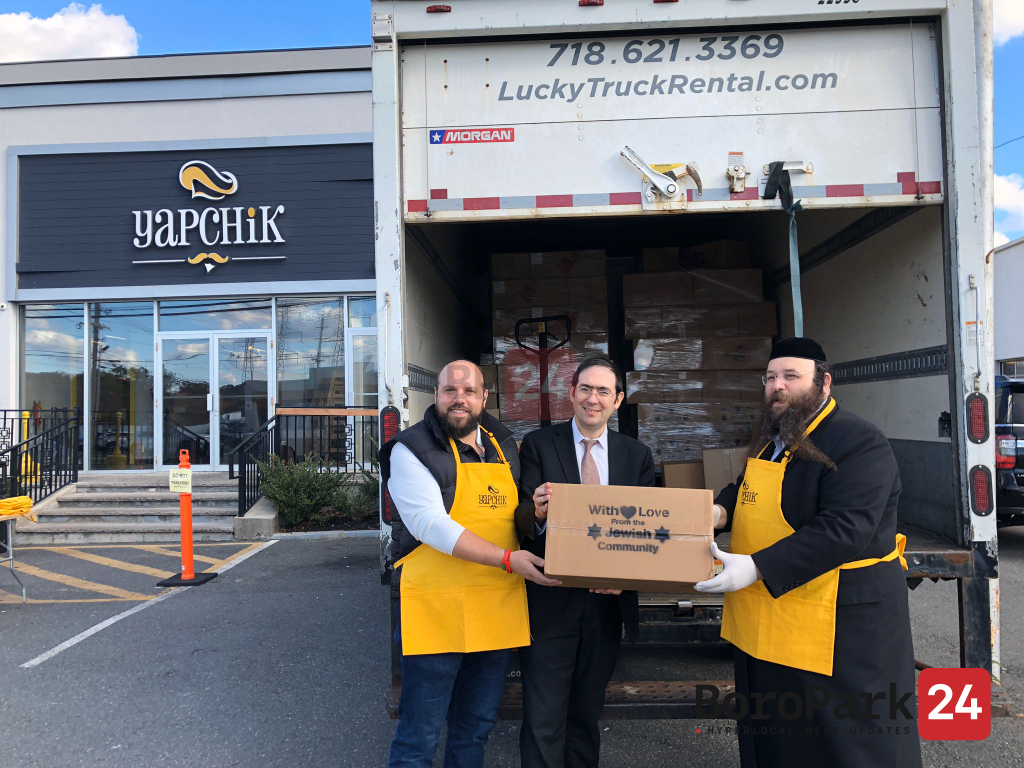 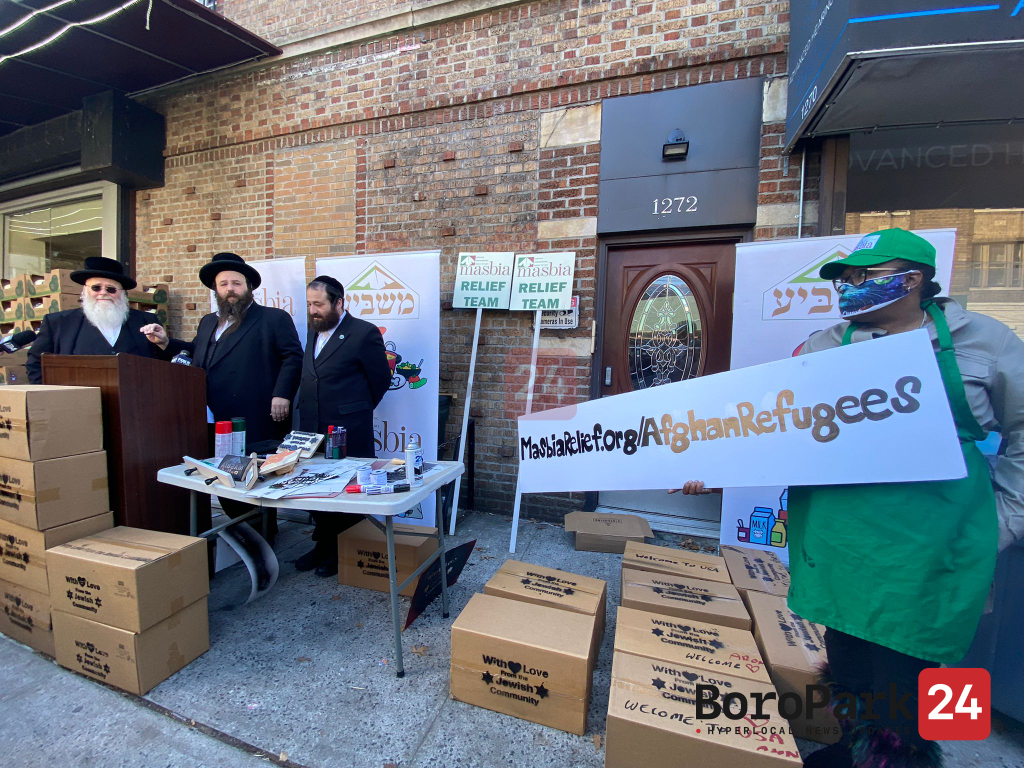