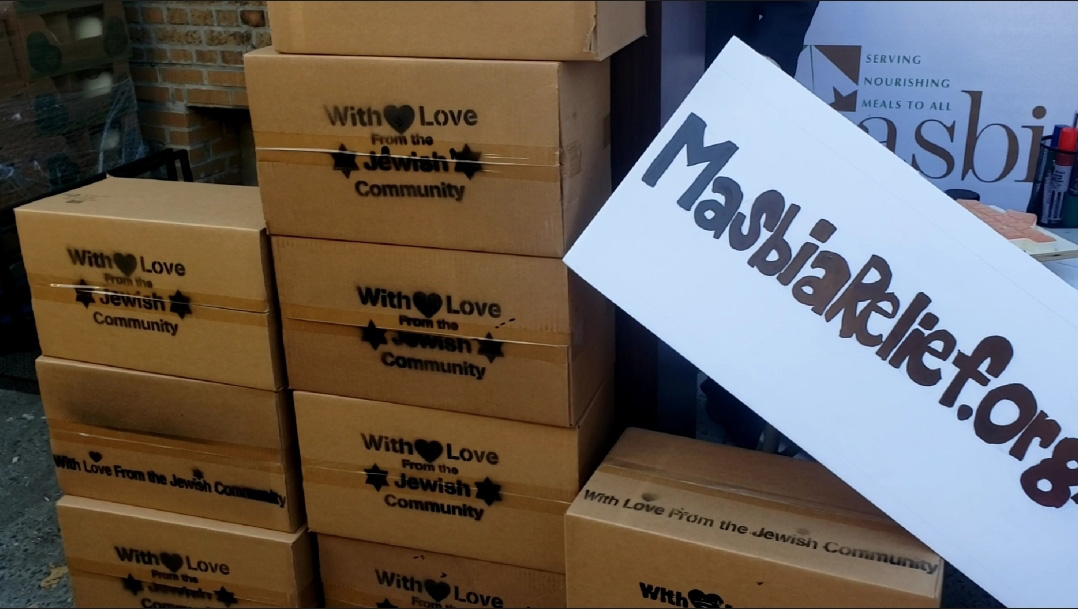 Read the article written by Mike Wagenhei, published in The Media Line, on the effort was organized by the grandchildren of Holocaust survivors; in solidarity with refugees who recently fled the Islamist Taliban in Afghanistan. Alexander Rapaport, Masbia Soup Kitchen ED, led the Masbia Relief Team to load up a large truck with groceries.

“With love from the Jewish community.”

Every box of food leaving the Borough Park neighborhood of Brooklyn, New York on Wednesday was stamped with those words. A large delivery truck loaded up with falafel chips, rice, tomato sauce, fruits, and vegetables headed out early in the afternoon, destined for Joint Base McGuire-Dix-Lakehurst, in Fort Dix, New Jersey.

The food wasn’t for the US Army, but for those who fled a military’s might. The effort was organized by the grandchildren of Holocaust survivors, in solidarity with refugees who recently fled the Islamist Taliban in Afghanistan.

The effort had been weeks in the making, according to Masbia Soup Kitchen Network Executive Director Alexander Rapaport. But, the army chaplains on the base at Fort Dix only secured a warehouse to store the food on Tuesday.

“It’s not only about the food. It’s the message. We believe, as grandchildren of Holocaust survivors, that we should welcome refugees, that we should be welcoming and understanding of the plight of people who were running from atrocities,” Rapaport told The Media Line.

“There are over 250 little synagogues here. Every one of them is named after a different town in Eastern Europe that our people had to flee,” said Rapaport, who runs the food donation network that has seen requests for its assistance – both inside and outside of Jewish communities in New York City – rise significantly during the COVID-19 pandemic.

Rapaport is a prominent member of the large Haredi, or ultra-Orthodox Borough Park community, where a sizable portion of the Jewish population is children or grandchildren of Holocaust survivors. Besides housing, the largest Jewish community in the world outside of Israel, Borough Park and its surrounding neighborhoods feature around 15 spoken languages, due to sizable Arab, Asian, Pakistani, and Haitian communities. Rapaport previously had teamed up with Rockland County legislator Aron Weider and others this summer to send two 40-foot containers containing shelf-stable food and hygiene items to Haiti in the wake of the devastating earthquake there. They were ready to do it again for the refugees from Afghanistan.

Rapaport, together with Weider, personally stamped and spray-painted the food boxes with messages of Jewish solidarity. While Masbia’s products are kosher, the boxes headed to Fort Dix were loaded with halal food, in recognition of the dietary requirements of many of the Afghan refugees.

“I grew up with four grandparents who are Holocaust survivors. Three of them survived Auschwitz. And, growing up, I heard a lot about the experience of my grandparents in these camps and how appreciative they were to the United States of America that they were able to resettle,” Weider, who lives about 40 miles north of New York City, told The Media Line.

Weider said the images that played out on television in August during the fall of Afghanistan’s capital, Kabul, in which desperate Afghans tried to leave the country via the airport, spurred him into action.

“We’re all certain that these refugees in New Jersey are well-fed, but there’s something that they need and we can add to it. And that’s just a little heart, of telling these people that they are welcome here. And that we’re a nation that will embrace them. The videos of the people running after these airplanes just broke my heart – literally broke my heart. I saw these people hanging on the airplane, just trying to get here. And I can only imagine that could have been people down in Jersey that were on that flight. And for them to get like a little box like this – I only hope that when they’ll see a box that says, ‘with love from the Jewish community,’ it will brighten up their day, and they will remember it for a long period of time and perhaps their grandchildren, one day, will be standing here in Brooklyn, welcoming other refugees,” said Weider.

A Jewish serviceman in the US Army stationed at Fort Dix and assisting with the donation effort told The Media Line that over 12,000 Afghan refugees have been housed on the base thus far during the vetting process, and they’re currently are more than 10,000 refugees there waiting to be cleared for settlement in the US.

The source, who asked not to be identified due to lack of army authorization to speak to the press, said some of the refugees are residing in existing housing, while others are living in a massive tent city, which has come to be known as Liberty Village, on the 42,000-acre base. The Afghans living on the base are classified as Afghan Special Immigrants, who supported US forces in a variety of capacities during America’s 20-year presence in Afghanistan. Fort Dix is one of eight bases across the US playing host to Afghan refugees.

“Their mood is mostly positive and hopeful. We have been in their shoes many times in our history, most recently after the Holocaust – penniless refugees looking for a safe haven. We understand what they are going through. We will never forget the kindness we were shown in our time of need and this is our way of paying back,” the source said, noting that many of the refugees will spend months – and possibly up to a year – on the base during the health and security screenings and resettlement process.

A number of other organizations have offered donations of food and goods to the refugees, the source said. Journalists are not allowed into the areas on the base housing the refugees.

Rapaport said he and Weider are already planning a welcome event sometime in the next week or two for a small number of Afghans who have already been cleared through Fort Dix and resettled in Jersey City, New Jersey, just across the Hudson River from the Statue of Liberty and New York City.

Rapaport’s father, Yosef, said that he and his family initially landed in Canada after fleeing Europe, and only later were accepted into the US.

“I had to sign papers saying that I’m not a communist. Those were the questions asked of me then. Today, people are asking different questions,” the elder Rapaport told The Media Line, acknowledging those concerned about the potential security implications of resettling such a large number of Afghans.

“But we don’t care about your background. You’re family. You’re in distress. We Jewish people, we know what it means,” he said.

Read the original article in The Media Line HERE.