“In this particular incident, we were needed for relief in the first few hours, helping people with food and toiletries, and we stayed on-site for a couple of hours until everyone got what they wanted,” said Motty Brauner, coordinator of Shomrim of Boro Park. 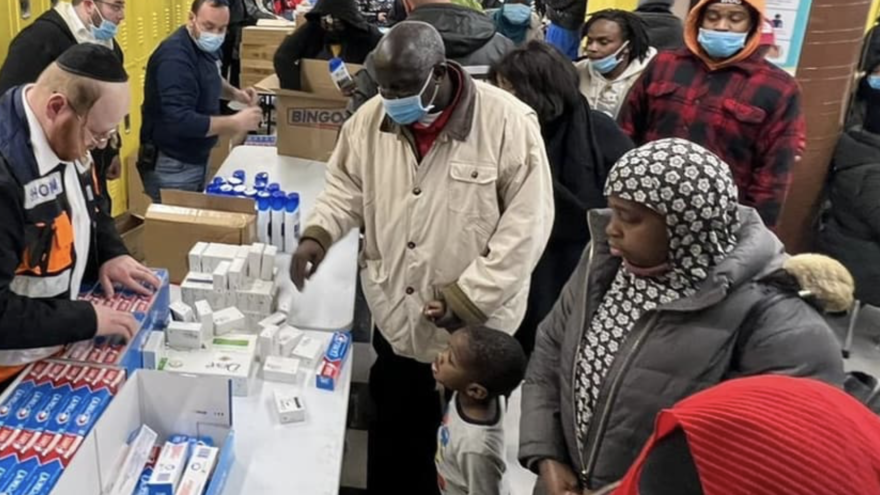 Orthodox Jewish groups have been mobilizing to assist residents of a high-rise apartment building in the Bronx, N.Y. after a Sunday-morning fire killed 17 people—eight of them children—in what’s being called the worst fire in New York City in more than 30 years.

“We’ve lost 19 of our neighbors today. It’s a tragedy beyond measure,” said Mayor Eric Adams on Sunday. “Thank you to the men and women of the FDNY [Fire Department of] for fighting so valiantly against today’s five-alarm fire in the Bronx. An investigation into what happened is underway. To everyone affected by this tragedy: Your city will be with you in the days ahead.”

In addition to those who lost their lives, dozens of other people remain hospitalized for injuries sustained during the evacuation, and hundreds are now homeless. According to city officials, the fire was started by a faulty space heater.

Among the Jewish groups stepping up to help were volunteers from Shomrim, a community security and assistance organization, teamed up with staff from Masbia Soup Kitchen, both based in the Chassidic neighborhood of Borough Park in Brooklyn, N.Y. They stopped in at a local supermarket—Bingo, which is nicknamed the kosher Costco for its warehouse-style shopping—on Sunday and purchased nearly $5,000 worth of essentials such as toothbrushes, toothpaste, soap, and shampoo, along with cookies, energy drinks, and bottles of water (even brand-new towels) and delivered them to a staging site for those who lost their homes in the fire.

They filled four SUVs driven by Shomrim members and an additional three SUVs they ordered from Uber with the materials, along with cooking utensils, a portable stove, and propane tanks from the Masbia offices. Executive director Alexander Rapaport also reached out to a caterer for additional foods like chicken nuggets, rice, and hot soup.

According to Motty Brauner, coordinator of Shomrim of Boro Park, some 25 to 30 volunteers from Shomrim in several locales in Brooklyn, including the Jewish neighborhoods of Flatbush and Crown Heights, were among those who helped out.

“We normally respond to concerns in our primary coverage, but we head out to wherever people call us or we are needed. In this particular incident, we were needed for relief in the first few hours, helping people with food and toiletries, and we stayed on-site for a couple of hours until everyone got what they wanted,” he said.

“This incident is very sad, but to see the smiles on their faces—that people from the outside came to help and had them in my mind—that’s priceless,” he added.

As for Rapaport, while his team was setting up a Masbia food tent outside, “an older African-American man came over and hugged me and hugged me, and wouldn’t stop.”

“It’s not what you give a person; it’s that you care and show up that they see they are not alone,” he said. “It’s just so helpful to the people going through such a situation; it shows they don’t have to suffer in isolation, and that people care and want to give you comfort.”

Masbia is also undertaking some additional measures to help the families. They were planning to visit the hotels housing the fire victims on Monday afternoon and deliver dozens of pizza makers, which can be used to grill a variety of items without a stove or fire, so families can make some of their own meals along with giving them food provisions. They are also in talks to provide brand-new appliances once the families can move into a new home. 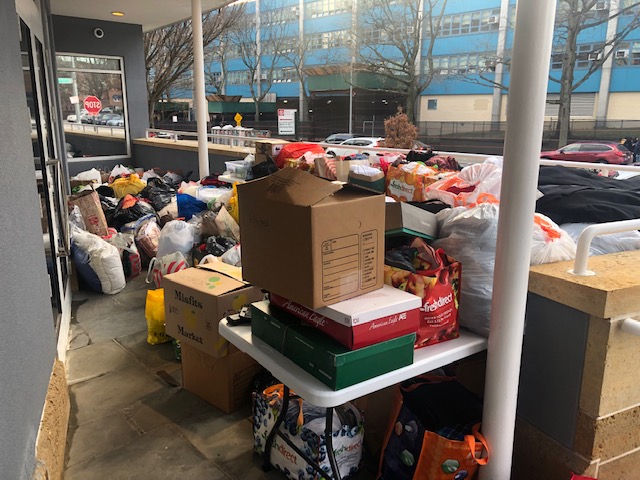 "Our small part in making lives a little better"

Rabbi Choli Mishuvalin, director of Chabad of the South Bronx, and his father-in-law, Rabbi Chayim Alevsky of Chabad of the West Side, also provided aid on Sunday night, taking turns handing out soup in Masbia’s pop-up tent. Mishulavin has set up a fund to purchase items for the families.

“Our hearts are hurting for the tragic loss of life, and all our Bronx neighbors in pain right now,” he wrote on Facebook Monday morning. “We’re raising 5k for the fire victims to purchase clothes and household items to get back on their feet. We’re one family; let’s take care of each other. A little bit with a lot of heart goes a long way!”

The Riverdale Jewish Center, which is located a few miles away in another Bronx neighborhood, is working with their local state senator, Alessandra Biaggi, to serve as an official drop-off location for essential supplies for families affected and healthcare workers on the scene.

“Our membership at the Riverdale Jewish Center thinks constantly about its role in the greater Bronx community. We build active and vibrant relationships with local elected officials and government exactly for situations like this,” said the congregation’s senior rabbi, Dovid Zirkind. “When news broke of the devastating fire just a few miles from our community, our members were eager to act, and our leadership was quick to partner with our senators and congresspeople to find out how best we could serve.

“Financial contributions, basic supplies and offers to deliver anything and everything have been coming in rapidly since yesterday,” he said. “We are proud to do our small part in making the lives of those affected a little better during a difficult time.”

SAR Academy, a Jewish preschool through 12th-grade school also in Riverdale, has started an emergency fund to help the families who have been displaced by the fire.

“Our SAR community is saddened to hear of the devastating fire that took so many lives and injured many in an apartment building just three miles from our school. In addition to the loss of life and injuries, many families have been displaced and have suffered immeasurable loss,” said a message to parents. “At this time, as so many families will face long-term challenges, raising funds has been identified as the best way we can help. … We will also be collecting clothing, canned and packaged foods, and other supplies at the front of the academy building.”

The school also announced that students would be reciting Tehillim (Psalms) “to bring healing to all of our neighbors who are suffering.”

The Jewish Community Relations Council of New York is also working on providing assistance, though that is still in the planning stages.

“ … [W]e offer our hearts and help to the residents of the community affected, many of whom are African Muslims,” said the JCRC in a statement. “We are grateful to our longtime partner, Sheikh Musa Drammeh, for being on the scene to console the community at this devastating time, and we are in active discussion about how to best help the victims with this trauma. We also thank the FDNY [Fire Department of New York], many of whom risked their lives without oxygen tanks, for their bravery and heroism in rescuing the victims.”