Ruben Diaz starts his day knowing that he has to feed nutritious meals to over 500 people,using donated food and following kosher dietary rules. Starting at nine in the morning, he puts in a 14-hour day, including his commute from Ozone Park, Queens, to Flatbush, Brooklyn.

Thursday is the busiest day at Masbia, a network of three kosher soup kitchens, because the group gives out bags of ingredients to tide recipients over for the weekend, as well as serving the daily dinner.  “The time I spend to come back home in the subway is my moment,” says Diaz.  “Without phone reception no one can call me. I use this time to relax and read a book.”

Of Columbian decent, Diaz is 30 years old, and the father of one. He has worked at Masbia as a chef for three years, after being promoted from a wait staff position by Alexander Rappaport, the executive director, who offered to let Diaz take classes at the Kosher Culinary Arts Institute. He spends most of his time in the kitchen wearing a green apron printed with the Masbia logo— Abraham’s tent open on all four sides, allowing him to see a guest coming from any direction. 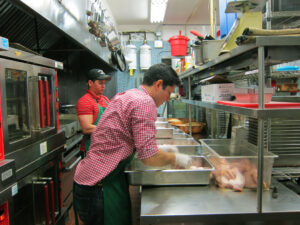 The organization started to provide kosher food for hungry people in 2004; they now serve over 500 free hot kosher meals daily in a restaurant-style setting where volunteers serve recipients and give out 250 pantry packages per week. They’re open from Sunday to Thursday and close Friday and Saturday for the Sabbath.

Masbia serves anyone who is hungry, regardless of their religious affiliation. Two locations are in Brooklyn, in Flatbush and Borough Park, which, in addition to being among the poorest neighborhoods in New York —according to United Jewish Appeal-Federation of NY— have the two largest populations of impoverished Jews, elderly Russians and members of the Hasidic community. The third Masbia location is in Rego Park, Queens. The Borough Park location is only open on Thursdays, and Diaz prepares the food in Flatbush and delivers it there.

While there is a note at the door stating that they will give pantry bags and meal tickets starting at 2 p.m.,  people line up as early as 9 a.m. 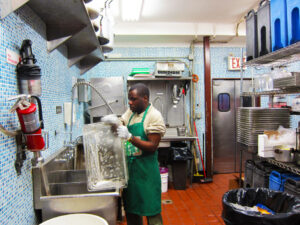 One of the volunteers at Masbia cleaning the kitchen. Photo: Gema Flores

With only a small percentage of their $2.5 million annual operating budget coming from government aid, they rely heavily on private donations of money and food to turn out balanced meals that include protein, starch, and vegetables. Most of the vegetables come from City Harvest and Food Bank, which provide them with about 28,000 pounds of produce every week. They buy chicken and meat from outlets with kosher certification — and while the aim is to serve fish or chicken, sometimes the budget limits them to beans. According to Rappaport, “The challenge is how to stretch every donation, every dollar, to have the most impact.”

Diaz has to plan the menus without knowing what he will have in his kitchen. If Masbia gets a big donation—like the 1,000 pounds of organic carrots that they got some weeks ago from a Muslim organic farmer in upstate New York—he and the kitchen staff have to figure out how to store the excess. There are as many as 25 volunteers in the kitchen at once. “Without the volunteers, it is nothing,” Diaz says.

They have to check that all the products they use in the kitchen are kosher. Asher Fahrahbod is full-time employee as site coordinator and mashgiach—a term used for a Jew who supervises to make sure that the food preparation follows kosher restrictions; no pork, no shellfish, no meat mixed with dairy, no eggs with signs of blood inside, no insects or bugs in the vegetables, and only mammals and birds that have been slaughtered according to Jewish dietary laws. The donated packaged food must have a symbol on it indicating that it adheres to the Jewish dietary restrictions.  Other products—like Barilla pasta or canned tuna—are kept for the food pantry. “One of our goals here is not to throw away any kind of food,” Diaz says. 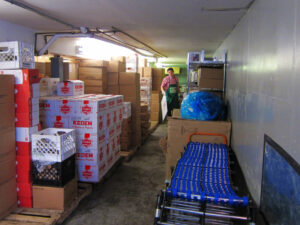 On weekends, Diaz cooks at home for his family, where he doesn’t have to think about rules.  “For me, food is food,” Diaz said, “I never check symbols.”