People Magazine: The Restaurant with No Cash Register: A New Experiment in Feeding the Hungry

By Veronique Greenwood and Jacob Templin for NationSwell

This article was originally published by NationSwell, a website dedicated to sharing the stories of innovative Americans who are

working to effect social change and move the country forward.

The phrase “soup kitchen” doesn’t exactly ooze comfort. Getting meals to the homeless or hungry is usually a bare-bones affair, involving the most inexpensive food and all the ambiance of a basement cafeteria.

But walking into a soup kitchen run by Masbia, a group founded in 2005 and now operating four store fronts across Brooklyn and Queens, feels different.

The food is fresh, cooked by chef Ruben Diaz and volunteers, and meals incorporate donations from city farmers’ markets and local CSAs. There’s art on the walls. The chairs don’t fold. It looks like a restaurant, and it is – one where nobody has to pick up the check themselves.

Masbia has served more than 400,000 meals since its founding.

The food is kosher – the founders are Hasidic Jews, and the first store front opened in Boro Park, a primarily Orthodox Jewish neighborhood – but people of all creeds are welcome. Many of the volunteers preparing the food are patrons, who work a few hours and then take their meals with employees.

But while volunteers help, private donations are what keep the doors open, making up much of the year’s $2 million operating budget.

During a recent visit to Masbia, most seated patrons confirmed that this was the first and only soup kitchen they had sought out. And perhaps it’s not so surprising: They said dignified surroundings and healthy, comforting meals raise Masbia above the standard, a welcome reminder that seeking help with food doesn’t have to be a gloomy affair. 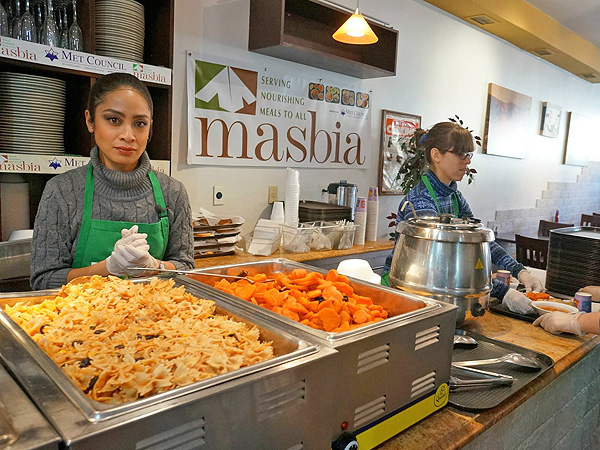