A ‘night of watching’ with the Jewish poor. 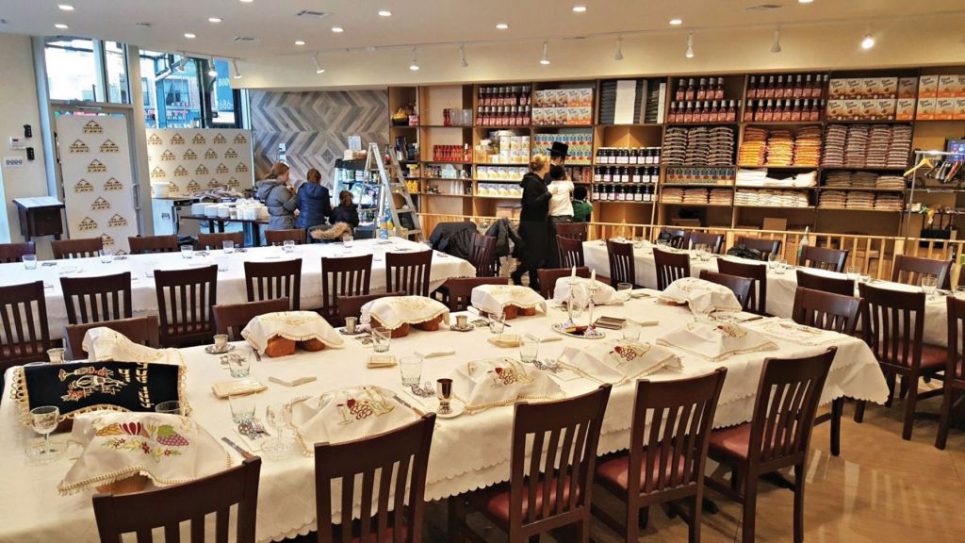 Folks say that God must love the Jewish poor; He made so many of us. After all, 1 in 4 Jewish households is poor; 1 in 9 is near-poor; totaling 507,000 in the five boroughs, with an additional 100,000 Jews hardly making ends meet, reports the Metropolitan Council on Jewish Poverty.

He made so many of “us.” When it comes to the Jewish poor, there is no “them.” In the suburbs, there has been an 86 percent rise in Jews who are financially in trouble. For more than 40 years, Tomchei Shabbos, in Brooklyn, has been making “secret” free-food deliveries, left at the doors of the poor before Shabbos and holy days. Today, there is a Tomchei Shabbos of the Five Towns and Rockaways. Its website says, “There are still those in our midst who struggle to afford even basic foodstuffs,” and Passover foods and shmurah matzah brings the greatest struggle of the year.

“Too many people in our local area cannot afford a traditional Passover meal.”

The Orthodox Union sent out an e-mail: “We have received more requests than ever from families in need of assistance.”

The Jewish Community Council of Greater Coney Island says, “Too many people in our local area cannot afford a traditional Passover meal.”

Manhattan’s Upper East Side, the old “silk stocking district,” is among New York’s toniest. This week, however, the rabbis of Kehilath Jeshurun, the centerpiece of the Jewish neighborhood’s wealth and elegance, sent out an e-mail: “This is an urgent call to everyone in the KJ community.” On the one hand, $62,000 was raised [with the goal of $200,000] for the Passover Relief Campaign. On the other hand, the campaign will help not only the Met Council but also “members of our community who used to be donors to Passover Relief but now are on the receiving end. Think of it: There are members of our congregation who used to give generously to all of our campaigns and now we must give generously to them.” 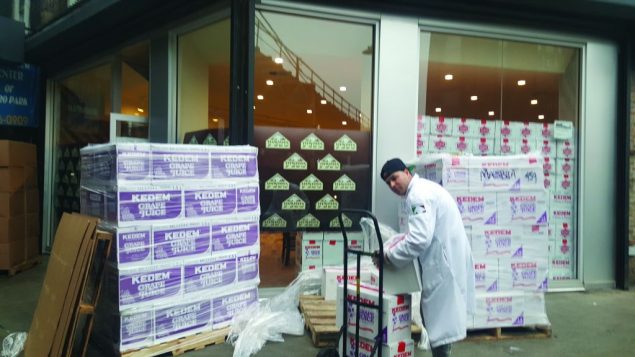 In New Rochelle, Mat Hoffman is leading free seders at the Young Israel of New Rochelle. He doesn’t get paid (he is ordained, but a lawyer by trade), but it costs him (and his organization, The Jewish Flame) “between $45-50 per person. Over the two seders we get between 105-120 people,” with little overlap between the two seders. “I wouldn’t say that [the guests come] because of finances, though that has been the case for some over the years. Every Jew should have a seder, a seder where they’re comfortable, where they feel loved.”

The Torah says Passover night is “a night of watching,” even if only Heaven?

Hoffman says that when he first started running programs in Westchester, over 25 years ago, “we got flack from some establishment organizations because we didn’t charge. My son, 6 at the time, heard us talking. Then he drew Moses and Aaron at the foot of Mount Sinai, with a turnstile, you had to pay. And my son says, ‘This isn’t the kind of Judaism we believe in, Daddy.’ And I said to my wife, ‘He gets it. Thank God, my kids understand.’ God loves every Jew, so I’m not going to be like that.”

When Alexander Rapaport was a chasidic child in Borough Park, Shabbos and yuntif (holy days) at his grandparents’ table meant guests. Not necessarily family or friends but Yiddish drifters, down-and-out shleppers living the lonely life. Young Rapaport often sat next to them, the kind of people, he remembered, who didn’t or couldn’t “shower before Shabbos.” It didn’t matter. The angels who visited Abraham, he knew, weren’t dressed like angels.

In 2005, Rapaport co-founded Masbia, Brooklyn’s first and only kosher soup kitchen disguised as a restaurant, except there’s no bill after dessert. The poor are fed by waiters, and sit at private tables separated by greenery. What started out serving eight Jews that first night, now serves two million meals each year, with locations in Borough Park (5402 New Utrecht Ave.), Flatbush (1372 Coney Island Ave.) and Rego Park (98-08 Queens Blvd.).

Something wasn’t right. They were operating Monday through Thursday, but Rapaport kept saying to himself, “I got to do Shabbos. I got to do Shabbos.” This year, the Masbia in Borough Park (where there are 13,600 Jewish households considered poor or near-poor) added Shabbos meals, both Friday night and Shabbos afternoon. That, in turn, inspired Rapaport to do seders — in fact, to serve every Passover lunch and dinner — for the very first time.

Ten days before the first seder, Masbia has 36 reservations. “If we get to 50,” says Rapaport, “it’ll be a question if we could do a comfortable seder in our regular space,” so he’s begun looking at local school lunchrooms, if he can find one that’s wheelchair accessible.

Masbia’s pantry, which distributes food weekly, had more than a thousand pounds of shmurah matzah (a retail value of approximately $25,000), “and we gave out most of it today,” almost two weeks before the seder, “which means we need to re-supply.” One gentleman, Carl Lerner, “donated a lot of shmurah matzah in memory of his parents,” says Rapaport. “There is a very high-end [shmurah] product coming from Bet Shemesh, so we do one mitzvah by doing another mitzvah — supporting Israel.” 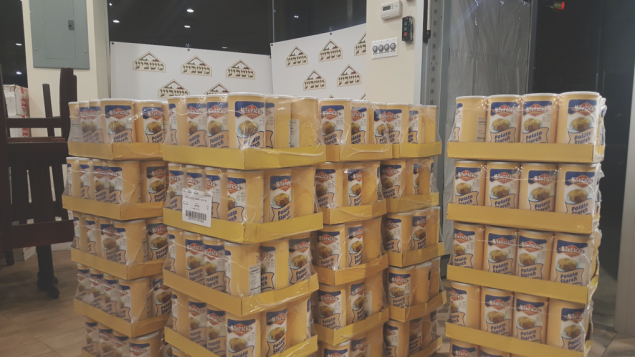 If the weekday Masbia aspires to be a free and dignified restaurant rather than a typical soup kitchen, Masbia on Shabbos and the seders aspires to be nothing less than Rapaport’s family table. Weekday patrons usually stay less than 30 minutes; Shabbos and yuntif guests can stay for hours, “as if it was my Shabbos table at home. There’s a lot of singing, a lot of shmoozing, we say divrei Torah [biblical insights] and have nice Jewish discussions. Some neighbors come after the meal just to enjoy the warm environment. On Shabbos morning, after shul, some neighbors come just to say Kiddush with is, it’s such a nice Shabbos feel.”

Did we say that weekday guests stay for 30 minutes? Not always. Rapaport remembers, “One mother finished the meal with her children, and then took out their homework at the Masbia table.” Rapaport didn’t mind. “I thought, how bad must it have been for her at home, that she wanted to do homework with her children in a soup kitchen?”

For the seders, says Rapaport, “we hired a chazan, Levi Kranz, to lead. We’re asking people [who made reservations] what their preferences are, to lead their own seder or go with the chazan; to have more English or more Yiddish; to be chasidish-style or not.”

Passover, of course, requires special dishes, but no paper plates. “Oh,” laughed the chasid, “how into vampires are you? Ever hear of ‘Twilight?’ A designer from the ‘Twilight’ movie donated dishes, same as in the movie.”

Holiday preparations are underway. Rapaport scrapes the maror (the tear-inducing horseradish root). In Coney Island, a Masbia distribution, scheduled from 7 a.m. to noon, attracted lines so long that food was still being distributed four hours later. Rapaport didn’t want people to wait on such long lines, so in Borough Park he invited “a support group for 500 frum single mothers, or widowed or divorced with children,” to come the night before. Then, “a friend of mine has a group of chasidic taxi drivers. They probably live hand-to-mouth, so I got them to also come the night before.”

Masbia, of course, was created for the kosher poor, but no one is turned away. “Always, when we talk about the poor we mean everyone. When we give out food, I ask, do you want Passover food or regular food? I didn’t want to insult. Some want shmurah matzah, some square. We have Manischewitz, Kedem, organic eggs, non-organic eggs, we give people choices. It’s more exciting for people to have choices.”

Rapaport says he does what he does because he has no choice, nor does he desire choice. He loves Jews, loves the Jewish poor. After all, God made so many, and on seder nights so many will be eating because Jews who’ve been blessed will be feeding them, us, for free, for love, the price of a blessing.