FLATBUSH – It’s early morning on a warm Thursday in May and there’s a line of over two dozen people in front of a small building on Coney Island Avenue between Avenues J and K. A woman wearing a green apron sits in front of the door behind a cardboard box placed on a table. Her name is Julie and her apron says “Masbia.”

A young woman comes by with a stroller, a baby girl squinting in the harsh rays of the sun. “Oh, no blanket today?” Julie asks the baby. “It’s way too hot out!” the young woman laughs.

Julie types something in the computer that’s hidden behind the cardboard, and the lady is handed two bags of food. She places them on the bottom part of the stroller, says goodbye, and leaves.

“Next!” Julie says. An elderly man with a blue cart walks on up.

A petite middle-aged woman wearing a nude colored shalwar kameez is standing in line with a red steel shopping cart, she does not speak English and reluctantly talks to me in Urdu.

“I live with my one daughter and come here every Thursday,” she said. “This pantry provides me with the basic food items and that is how we go through life.”

Age and race have no boundaries when it comes to the Masbia Soup Kitchen, a kosher pantry and soup kitchen located in a diverse neighborhood in a hungry city. 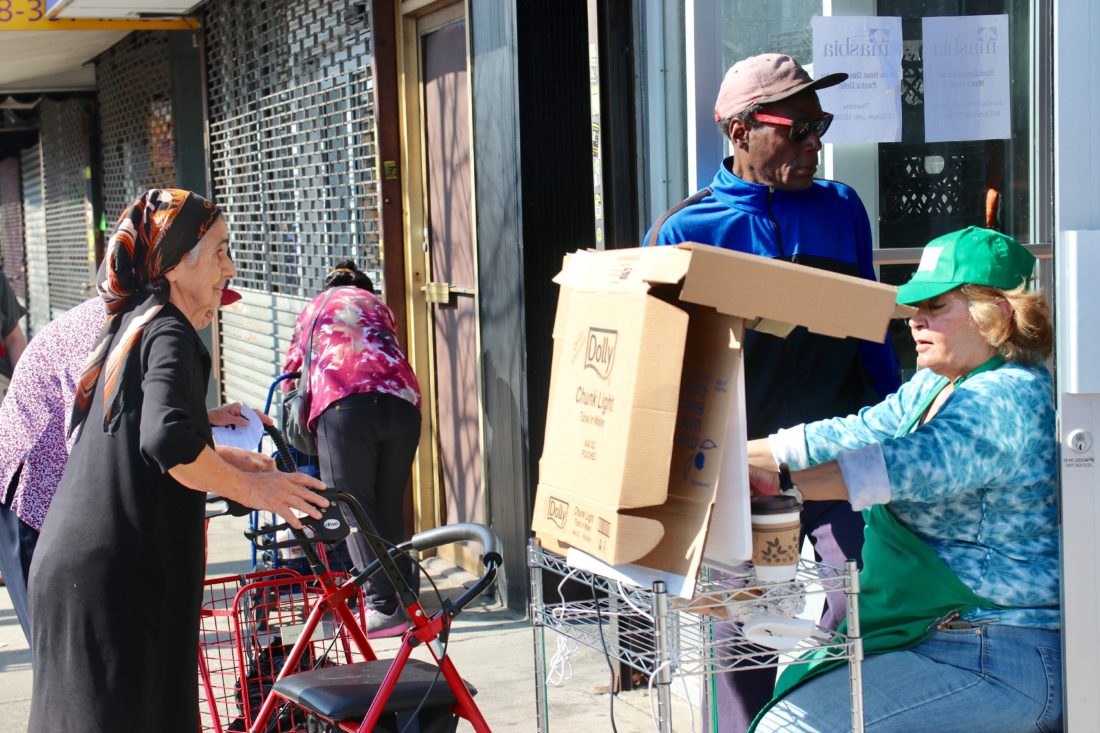 Food Bank For NYC reports that Brooklyn has seen the largest increase in its meal gap (the difference between being food insecure and food secure) across all of the boroughs – a gap that widened by nearly 13 million meals between 2009 and 2014. According to the report, there were 473,350 food insecure people in Brooklyn or almost every 5th resident:

Masbia was established in 2005 by Mordechai Mandelbaum and Alexander Rapaport with the simple aim of providing people in need with Kosher food. It started as a soup kitchen in Boro Park and then expanded into a pantry, enabling patrons to make their own food at home. The non-profit receives food from Food Bank for NYC,Empire Kosher, Kosher by Design, and Fairway Market (among many others).

In addition to Boro Park, Masbia now has two additional locations – one on Coney Island Avenue in Flatbush, and one in Rego Park in Queens, serving about 2,000,000 meals a year. Flatbush is where emergency food packages are distributed, and it is also where the main kitchen is.

Every Thursday, about 500 people come by the pantry and get a brown bag filled with grains, fruits, vegetables, and proteins, enough to last their families three days.

“We are a kosher program but we attract beyond the kosher community,” says Alexander Rapaport, the executive director of Masbia. “Everyone wants food. Every religion, every race. Everyone’s represented.”

Though the official times of the pantry are every Thursday from 8 to 11 am, people gather outside as early as 5 am. Rapaport dislikes what he calls the “breadline”: “We’re working to bring dignity. We want these people to feel dignified and not demoralized.”

That is why Masbia is a different kind of soup kitchen as well. From Sunday to Thursday in the evenings the place feels like a restaurant, with Masbia volunteers serving as  waiters and waitresses, taking orders from their customers just like at any other establishment, and restoring a bit of dignity in the process. 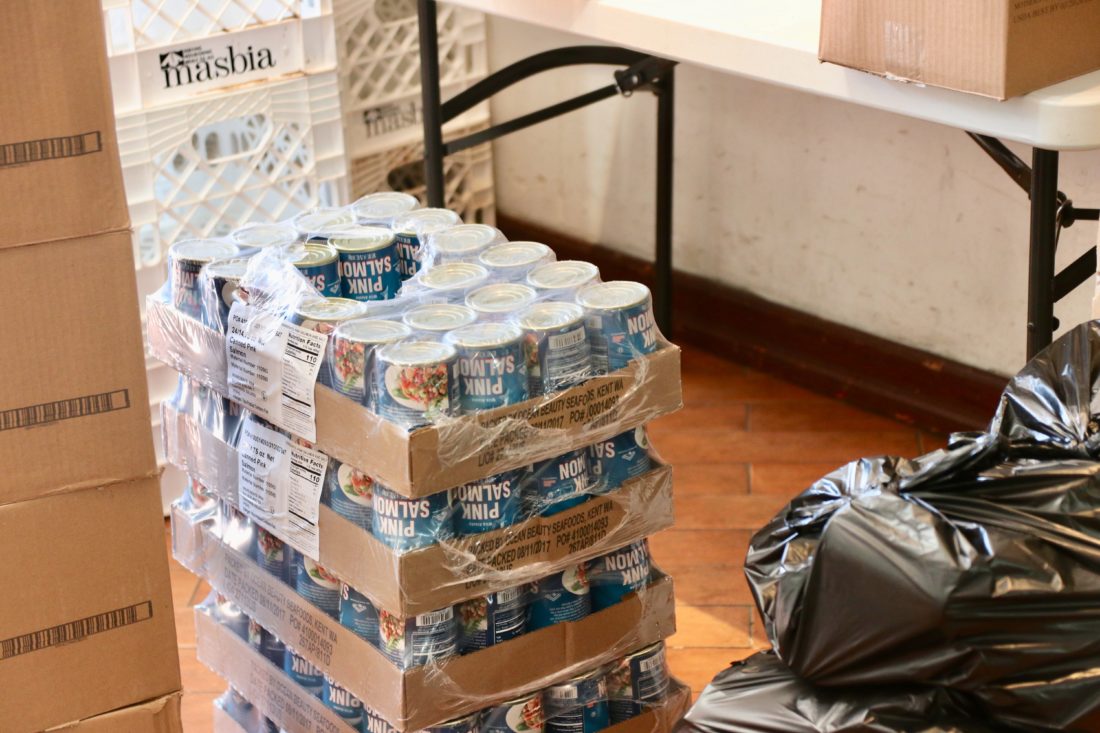 Amanda Ng started as a volunteer, a job which which three and a half years ago turned into a staff position in the Masbia office – fundraising, emails, accounting, “and all the small stuff.” While I spoke to her, she was making food packages – tilapia fish, dried beans, pasta, and applesauce, along with other items. Every year she’s making more.

“We see a lot of [working poor] here,” she said, talking about neighbors who have full time jobs and still need to rely on the pantry to feed their families. “There needs to be a policy change, advocacy, and strong funding for local soup kitchen and pantries.”

Elliot Lieberman has been with Masbia since 2014 and is a supervisor at Masbia. On this particular day, he was carrying crates of food inside and outside the pantry in Flatbush. By the time he took a breath to speak with me, his white shirt was wet and his face was filled with sweat.

“I want to people to open their eyes and see how hard and desperate people can feel in life,” he said. “There’s a great need for food in this neighborhood, and people will go hungry if we don’t help.”

Though he supervises the pantry, Lieberman also takes it upon himself to speak and listen to his clients.

“I always try to recommend them to talk to legal aid people or their congressmen,” he said. “I try to tell them they shouldn’t spend their entire lives relying on soup kitchens.”

It is 2018 and hunger is still evident. People still stand in long lines, wiping the sweat off their foreheads in the summer, or shivering in their jackets during the winter. Masbia and Rapaport are working to change that.