Forward: Kosher Soup Kitchen Opening Was ‘Imminent’ — So What Happened? 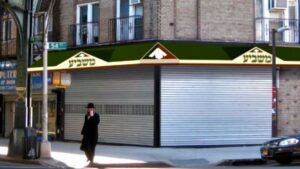 Courtesy of Masbia: The new Boro Park location, at New Utrecht Avenue and 54th Street, has yet to open.

Alexander Rapaport and the people who depend on him for food are living on promises. The latest, yet to be delivered, is one of the key factors holding up the opening of his new soup kitchen in Boro Park.

In the weeks leading up to the Forth of July, Rapaport, who is Masbia Soup Kitchen Network’s executive director, said the opening of the organization’s new location was imminent.

“Not months, maybe not even weeks, maybe days,” he said then. “As soon as the place is basically set up — because we’re not going to play games with people’s lives.”

Six weeks later, the site has yet to open and Rapaport finds himself in the middle of a complicated situation.

Masbia, which serves hot, kosher meals to the needy in a restaurant-like setting, has three locations, two of which are in transition: one in Rego Park, Queens, which is in the process of moving (half a mile away); one in the Flatbush section of Brooklyn and a third in heavily-Orthodox Boro Park. The original Boro Park site lost its lease and closed in the Spring of 2015. Masbia has been paying $5,000 a month in rent on a new space a block from Shomrei Shabbos, a 24-hour synagogue, since January 2016.

What’s holding up the opening?

“A major cash-flow crunch,” according to the effusive and seemingly tireless Rapaport. Aside from a regular shortage of resources and a significant increase in the number of meals being served year over year, there has been a holdup in funds Masbia relies on from City Council member items, which make up 10% of its operating budget. 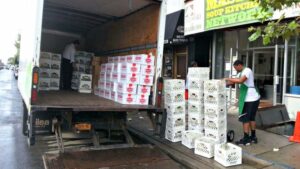 “And what happens if there is a backlog?” he asked. “All our money from last year’s fiscal year is still in the pipeline. It’s not that we won’t get it, but it’s really messing with our cashflow.”

Rapaport says he is waiting for an appropriation of over $200,000 from the city.

“Our NYC member items for fiscal year ’15–’16 ending June 30 has yet to be released, and is somewhat taking a little bit longer to get through the bureaucracy this year. While it is only less than 10% of our budget, it does create a huge hole if the money doesn’t arrive by the time the fiscal year is over.”

Why is it being held up?

“I cannot speculate,” Rapaport said. Sometimes you’re at the bottom of the pile and everything goes through the bureaucracy very slow.”

Rapaport emphasizes that even with the funds from the city, Masbia would still lead a precarious existence. “A dollar raised in fundraising, until that dollar is put in someone’s stomach as food — most of the time it doesn’t take a week; sometimes it’s the same day.”

In order to open its doors in Boro Park, Masbia requires an additional $20,000 so it can put in a central air conditioner system, a few more counter tops and a dishwasher. “And that is only to be able to open,” Rapaport said. “We could open as long as we could operate within it, and then get the add-ons as we go.”

“Add-ons” include a walk-in refrigerator/freezer and software that would allow the soup kitchen to offer a client-choice food pantry, where visitors would use a tablet device to indicate what groceries they would like to take home, eliminating the waste that occurs when people end up with foods that they can’t or won’t eat due to dietary restrictions or preferences. 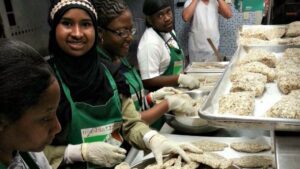 Even a basic item such as a dishwasher isn’t a deal breaker. “We could do the first day paper goods,” Rapaport said. “We’re really trying to overcome this, but when everything else is tied up and our daily operation is barely keeping the lights on, it’s very hard to move forward.”

There have been unexpected expenses. Two weeks ago, the hot water heater in Masbia’s main kitchen needed to be replaced. There was a tire for the van; a broken potato masher.

“Every little bit of that creates a lot of cost. It’s true that if I just invest another $20,000 in Boro Park I would be able to open, but if you gave me tomorrow $20,000 I’d probably pay my Con Edison with it, because of that big hole we’re waiting to close.”

Rapaport estimates that Masbia served 2.2 million meals (a combination of sit-down hot meals and take-home packages) in the last fiscal year, up from 1.5 million the year before — despite the Boro Park location being closed.

“The people are coming, we’re just having an overload at the other locations,” he said.

Between rent, security and construction, Masbia has spent close to $150,000 on the new location in Boro Park and raised close to $100,000 dedicated to the project, Rapaport said. 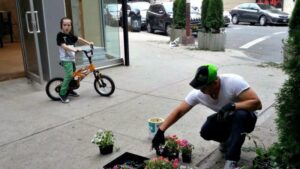 Courtesy of Masbia: Volunteers planted flowers outside the new location this summer.

He hopes to receive more donations once people come back from vacation in September, adding that he intends to spend another $100,000 in equipment and construction touch-ups to “enhance the clients experience of the place.”

To put his challenges in perspective, Rapaport sites statistics about New York restaurants — that most don’t survive 10 years; that many fail within the first year.

“The only difference, as People magazine put it, is this is a restaurant with no cash register,” he said. “We survive against very hard odds in keeping our place open.”

Ultimately, Rapaport is impatient but philosophical. “It’s fair to say we’re not too much behind schedule,” Rapaport concluded. “A few weeks where we would have liked to feed more people.”