Masbia in the Kosher.com: Adamah Treasures Review: A Treasure for Those Who Like a Challenge 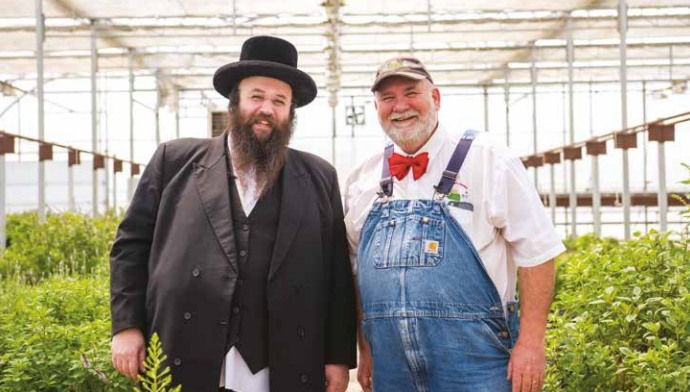 Read the article below, written by Emily Paster published in Kosher.com, about Masbia's Executive Director Alexander Rapaport, and Christian farmer Lee Jones have lunch a campaign together. Masbia Soup Kitchen, published “Adamah Treasures: A Kosher Adaptation of Recipes from ‘The Chef’s Garden’ Cookbook.” The adaptation was possible thanks to Chef Jordana Hirschel of Masbia, along with two other noted kosher chefs, Bryan Gryka and Joshua Massin, who worked together with Chef Jamie Simpson.

Adamah Treasures Review: A Treasure for Those Who Like a Challenge

I consider a cookbook a “keeper” if it contains a handful of recipes that I make on the regular. When I purchase a new cookbook, I accept that there are some recipes I will simply never make. My family includes picky eaters - like “I-don’t-eat-fish” picky - and members with food allergies. So, I have a lot of restrictions to work around when selecting a recipe to make. I don’t expect most cookbooks to be tailored just for me and my unique needs, but at the same time, I hate buying a cookbook only to find that most of the recipes simply won’t work for my family.

For families that observe the kosher laws, of course, finding cookbooks that meet their unique needs is that much harder. There are, naturally, many kosher cookbooks on the market today and even specialized kosher cookbooks for different cuisines and trendy appliances like the Instant Pot. Vegetarian cookbooks also offer many options for families that keep kosher homes. Nevertheless, there are many skilled, ambitious, and adventurous kosher cooks out there who cannot resist the lure of glossy new general-interest cookbooks - even though they know that they will have to adapt the recipes before they can use them.

Adamah Treasures, a slim volume of kosher recipes produced by Masbia Kitchen - the New York-based food relief organization - takes a new approach to help kosher families find cookbooks that are tailored for them. This book is actually a companion volume to The Chef's Garden, a comprehensive reference on vegetable cookery by farmer-to-the-stars Lee Jones. Chef Jordana Hirschel of Masbia, along with two other noted kosher chefs, Bryan Gryka and Joshua Massin, worked together with Chef Jamie Simpson - who had developed many of the original recipes in The Chef's Garden - specifically to adapt some of the book’s recipes for the kosher kitchen.

The Chef's Garden and Masbia Kitchen have a long relationship of collaboration, of which Adamah Treasures is just the latest effort. A family-owned farm on the shores of Lake Erie, The Chef’s Garden grows exquisite vegetables, including some unusual and heirloom varieties, that are shipped to restaurants and chefs all over the country. Many famous chefs, like José Andres, have visited the farm and its educational arm, the Culinary Vegetable Institute.

About The Chef's Garden:

The Chef's Garden cookbook, which came out in April 2021, is a 600-page tome with entries on 500 different vegetables and herbs and over 100 chef-driven recipes. The book also provides information on how to handle some of the less well-known vegetables that home cooks may encounter at farmers’ markets or in their CSA boxes. The Chef's Garden received a lot of favorable attention when it was released, making many writers' “best of 2021” lists.

Masbia Kitchen has been providing meals for food-insecure New Yorkers since 2005 in its restaurant-style soup kitchen. After a few years of serving guests at its facility, Masbia began providing visitors with weekly packages of groceries that they could take home and prepare for meals. This food pantry operation soon began to dwarf the soup kitchen. When the pandemic hit, Masbia responded by increasing its mission and today serves 500 families per day at each of its three locations, meaning that 7,500 New Yorkers receive food relief from Masbia.

Alexander Rapaport, Masbia’s Executive Director, has long collaborated with his friend Farmer Lee Jones of The Chef’s Garden. When The Chef’s Garden hosted a culinary conference in 2014, it included a session on food relief and how restaurants can be part of the solution to food insecurity in our country, at which the organizers invited Alexander Rapoport to speak. Since that time, The Chef’s Garden has sent packages of its vegetables - the same ones that chefs from the country’s finest restaurants receive - to Masbia to feed its guests.

When Farmer Jones released his cookbook in 2021, Masbia sought to collaborate again with The Chef’s Garden to provide copies of the book to its donors as a unique fundraising opportunity. There was only one problem - many of Masbia’s supporters keep kosher and while most of the recipes in the book were plant-forward and thus naturally kosher, some of the recipes in The Chef’s Garden cookbook included non-kosher ingredients, like oysters, or mixed meat and dairy.

Could kosher cooks have adapted the recipes in The Chef's Garden on their own? Certainly. But Masbia decided to take a different approach and develop their own alternative, kosher versions of some of the non-kosher recipes in The Chef’s Garden. The result is Adamah Treasures, a slim volume containing 22 recipes, each with its own mouth-watering photograph.

The group of chefs working on this project wanted the kosher recipes to stay true to the spirit and mission of the original book. Thus, they did not simply replace a few ingredients with non-dairy or ersatz versions that conform to kosher laws; rather, the chefs focused on the essence of each dish and how they could capture or recreate that essence while staying within the strictures of Jewish dietary laws. In so doing, these chefs amply demonstrated how restrictions - in this case, those of kashrut - often spark the best kind of creativity.

Adamah Treasures works best as a companion to The Chef's Garden book, not as a standalone volume. For example, some of the recipes rely on base recipes that are not included in the companion volume, but only in the original book. Moreover, the recipes in Adamah Treasures often call for vegetables that readers might not be familiar with - such as oca or black salsify - but that are the subject of entries in The Chef's Garden. 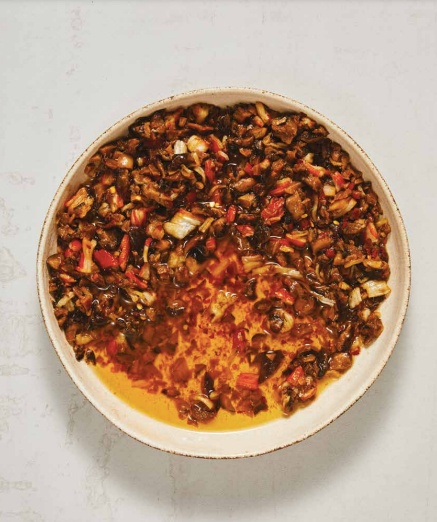 But as a supplement or companion to The Chef's Garden, Adamah Treasures is a delight. Many readers, not just those that keep kosher, will enjoy having these alternative versions of The Chef's Garden. Anyone with a shellfish allergy, for example, who thought that flavor-bomb condiment XO sauce was off-limits due to the presence of dried shrimp would be thrilled to find the recipe for kosher XO sauce in Adamah Treasures. Vegans and vegetarians will appreciate a version of Fresh Mint Jelly that relies on carrageenan and agar-agar instead of gelatin.

But as you might have guessed from the two recipes I just mentioned, the recipes in Adamah Treasures are not for beginner cooks. Many of the recipes call for unusual and hard-to-source ingredients. Others are sparse in their instructions, which can cause anxiety among less-confident cooks. 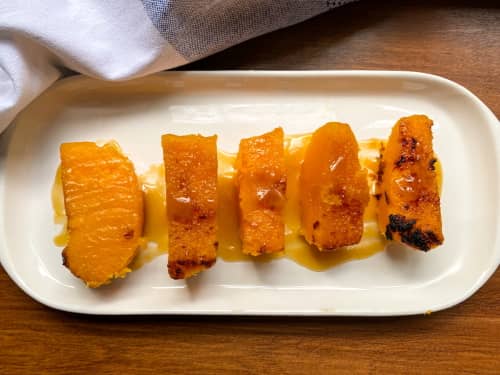 To evaluate Adamah Treasures beyond just looks, I tried two of the recipes: Baked Butternut Squash with Onion Caramel and Creamed Spinach with Fennel Pollen. Both dishes were excellent in the end, but both presented certain difficulties in the doing.
Butternut Squash with Onion Caramel is an exquisite vegetarian recipe that puts the sweet yet earthy onion-based caramel sauce front and center. Onions, especially sweet onions, have so much natural sugar, that its seems obvious to make caramel with their juices, yet this was the first such recipe I had seen. It’s a brilliant idea, but the recipe itself lacks detail, such as how long it will take for the caramel to reach the necessary 240 degrees. Indeed, the recipe lacks any indication other than this temperature - such as how it will look or smell - to indicate when the caramel is done. If this was your first time making caramel of any kind - or you don’t own a candy thermometer - this lack of detailed instruction would certainly be confusing. As for the squash, the accompanying photo shows the squash cut into slices, yet the recipe instructions offer no indication on how the squash should be served. 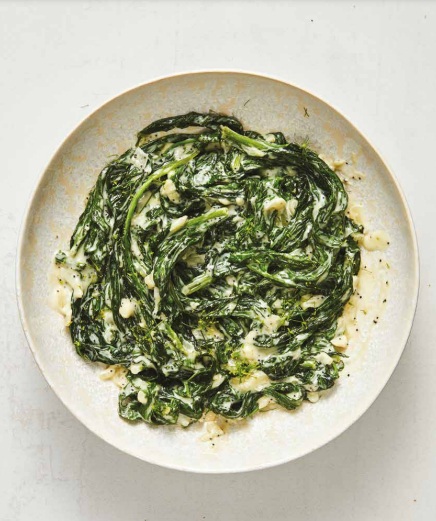 While the Creamed Spinach with Fennel Pollen is a relatively straightforward recipe, the difficulty there was finding fennel pollen. I consider my kitchen well-stocked, but I don’t keep fennel pollen - which is quite pricey, by the way - on hand. After failing to find this heady and fragrant spice at two different grocery stores, I ended up buying it online. (Incidentally, I am now looking for more recipes that call for fennel pollen because I have an entire tin to use up.) But the recipe itself is well-written and detailed, and the final dish tasted better than creamed spinach I’ve eaten at fancy steakhouses. Perhaps it was the fennel pollen that made the difference?

In the end, I commend the chefs who collaborated on Adamah Treasures for both a wonderful idea - true-to-the-spirit kosher adaptations of recipes in a general interest cookbook - and for the execution. The recipes in Adamah Treasures are creative, inspiring, and most of all allow the vegetables - which are after all the stars of The Chef's Garden - to shine. For those kosher cooks who enjoy a challenge and pride themselves on creating restaurant-quality dishes in their home kitchens, Adamah Treasures and The Chef's Garden are worthy additions to their cookbook library.

Help feed the needy and donate what you can HERE. You’ll even have the opportunity to receive exciting farm-style giveaways from The Chef’s Garden!