By Erin Riglin and Wendy Rhodes 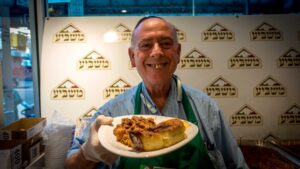 Coney never saw it coming. He has master’s degrees in computer science and mathematics. He enjoyed a lucrative career in information technology for four decades.

But as the years passed, the digital age outpaced him.

“One day it just happened, and you’re just hit like a brick in the face and all of a sudden, ugh, a new reality,” Coney says.

Coney is not his real name. He is afraid his children will be ashamed if they find out he sometimes goes hungry.

Food insecurity is defined as not having the financial means to obtain three nutritionally adequate meals a day. It can affect anyone at any time.

Each year, one in five New Yorkers will find themselves, at some point, unable to afford food. Many have jobs and roofs over their heads, but find that there is simply not enough money left over to eat.

Some people go hungry because of harrowing circumstances like illnesses or gaps in public assistance. Many senior citizens, like Coney, are retired or unable to find work.

But New York charity Masbia, named after a Hebrew word meaning “to satiate,” is changing the way food-insecure people eat.

Executive Director Alexander Rapaport is the co-founder behind what he calls “a restaurant without a cash register.”

Reservations are encouraged. This ensures that surrounding business are not disturbed by long lines, and that diners may plan meals around their time-crunched schedules.

“People come in our doors with an empty stomach and leave with a full stomach,” Rapaport says. “It is very gratifying.”

Read the original article and listen to the sound clips HERE