Masbia, a kosher food kitchen network in New York City that serves over 2 million meals to the needy every year, hosted an event at the Lincoln Square Synagogue to help raise awareness for its worthy cause
Quail. Kosher Slaughtering as featured in The New York Times. Top Chef competition. Christian Farmer from Ohio. Chop Hunger.

These elements—as the event’s aforementioned Facebook post promised—all came together Wednesday night at a Top Chef-styled fundraiser at the Lincoln Square Synagogue called “Chop Hunger,” which raised money for Masbia, the largest network of kosher soup kitchens in New York, serving 2.2 million meals every year out of three locations—two in Brooklyn and another in Queens.

Masbia began 10 years ago in Borough Park as a small, donations-based food option for the Hasidic community. It has since grown, welcoming people of all racial, ethnic, and religious backgrounds to their restaurant-style soup kitchen. Masbia has a don’t-ask policy, meaning that recipients do not need to show proof that they are in need financial in order to eat there. The soup kitchen functions on 1,000 volunteer hours and 16,000-18,000 pounds of produce per week.

Alex Rappaport, the executive director at Masbia, estimates that a kosher meal costs, on average, 30 percent more than a non-kosher meal. This means that some of the ingredients they buy are pricier or harder to get. As a result, Masbia, unlike other soup kitchens, is almost entirely privately funded, receiving minimal help from government grants. Masbia relies on events like Chop Hunger to raise funds and social media to get the word out. 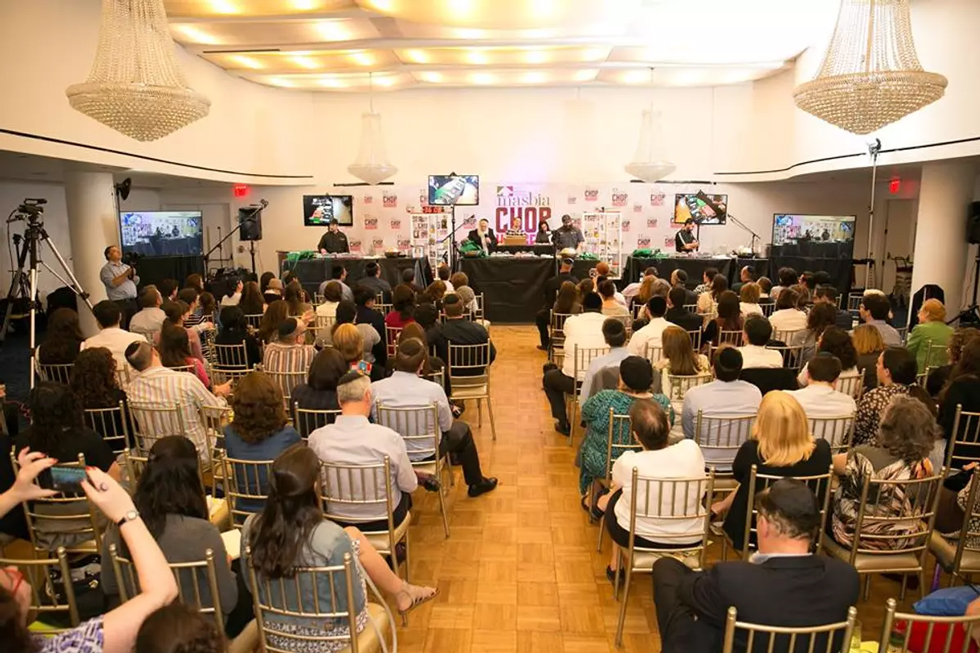 Ruben Diaz, the chef at Masbia, begins each day knowing that he has to feed nutritious meals to over 500 people daily using donated food and following strict kosher dietary rules. Ruben, who begins his days at 9 a.m. and works for a total of 14 hours, including his commute from Ozone Park, Queens, to Flatbush, Brooklyn, is often faced with surprise deliveries and missing products in his kitchen. This creates an unknowing element of pressure to prepare balanced, tasty meals without always having a bevy of ingredients at his disposal. On Wednesday, this element was emulated, in a sense, as the celebrity chefs who participated in Wednesday night’s competition—Bryan Gryka of Milt’s in Chicago, Asaf Hadad of Fuego in Miami, and Mendel Segal of BBQ Rabbi in Kansas City—were forced to cook under the similar conditions.

They were given potatoes, carrots, canned green beans, oranges, two surprise ingredients, and an auspicious 36 minutes to whip up a presentable, balanced plate. Their secret ingredients were quail and oatmeal, which each hold significance to the Masbia kitchen. The quail was butchered by 16-year-old boys from an Orthodox Jewish summer camp in the Poconos who were learning the rules of kosher slaughtering alongside Rappaport. And the oatmeal was inspired from a night about one year ago when Chef Ruben had run out of spices and had to quickly come up with a recipe to feed the hundreds of families that were about to show up. That’s when he whipped up Oatmeal Crusted Orange Chicken, a Masbia favorite. But all bets were off to see what the celebrity chefs could come up with.

The winner of the overall competition was Hadad, who also received awards for presentation and creativity. Hadad’s hot potato salad and seared quail had a Mediterranean kick that mixed well with the sweet and nutty “oatmeal dust” he blended.

And while the event glorified food to raise funds for those who struggle to find their next meal, Masbia did so tastefully, with a conscious regard not to be wasteful or excessively lavish. All of the food items that were prepared in the competition and served in the proceeding buffet (pulled beef sandwiches, Moroccan lentil soup, basil barley salad) would actually be served in the Masbia kitchen—which, thanks to the help of dedicated volunteers, remained open for dinner Wednesday night.

In addition, all of the food was donated and prepared by Masbia’s regular donors. Farmer Lee Jones of Ohio brought over 60 varieties of tomatoes which Jordana Hirschel turned into tomato jam, Panzanella, tomato twists, and Gazpacho, among other tomato-based creations. Hirschel also judged the competition alongside Mike Gershkovich from Mike’s Bistro and Adam Harvey of A&E Supply Co.

Masbia’s newest campaign centers around Tzimmes—a sweet carrot salad that is symbolically eaten by many Ashkenazi Jewish families at the Rosh Hashanah meal to represent an abundantly sweet new year—which is a staple in the Masbia kitchen because carrots are one of the most donated items. By donating to the Tzimmes campaign, families who are fortunate to gather around their own table this Rosh Hashanah will have the opportunity to open dialogue about both mindful eating and giving as they join Masbia in the fight to ‘chop’ out hunger.